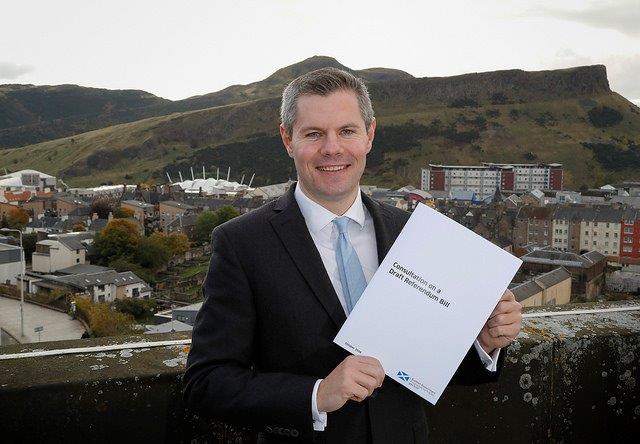 Renfrewshire North & West MSP Derek Mackay today joined the First Minister in publishing a draft bill giving Scotland the ability to reconsider the question of independence before the UK leaves the EU. The local MSP also serves as the Constitution Secretary within the Scottish Government.

Following a commitment in last month’s Programme for Government, the draft bill has been prepared to protect Scotland’s interests in light of the UK vote to leave the EU and the overwhelming vote across Scotland to remain. Having the bill available will allow all options to be available to the Scottish Parliament to protect Scotland’s continuing relationship with Europe.

The draft bill proposes that any referendum would be run in a way similar to 2014, with technical adjustments to reflect recent changes in elections law and procedures such as individual registration.

“This government remains committed to working with the UK Government on areas of common interest and where we can come up with constructive solutions to problems that we both face.

“It is important that a referendum on independence, like that in 2014, meets the gold standard in terms of fairness, transparency and propriety.

“The franchise will be the same as that for the Scottish Parliament. That will mean two important groups of people would have a voice denied to them in the recent referendum on EU membership: 16 and 17 year-olds and citizens of EU countries who have made Scotland their home.

“We are now publishing the bill for consultation so that it is ready for introduction should the Scottish Government decide that seeking the views of the Scottish people on independence is the best or only way to protect Scotland’s interests in the wake of the EU referendum. In stark contrast with the UK Government, we have a clear plan of action.”

“Following the EU referendum Scotland faces the prospect of being dragged from the EU against our will.

“It’s now clear that the right wing of the Tory party is seeking to hijack the referendum result to make sure Brexit means ‘hard Brexit’. They seem intent on taking us out the single market. That would be bad for jobs, businesses, and our economy as a whole.

“The Tories have no mandate for that. It’s not what Scotland voted for. 62 per cent of voters – and every local authority across the country – voted Remain. With 65% of voters voting Remain here in Renfrewshire.

“The Scottish Government is looking at all options to protect Scotland’s interests, and to make sure our voice is heard.

“In 2014, the UK Government said Scotland was an equal partner in the UK. Now is the time to prove it.

“While independence isn’t the only option, if it turns out to be the best or only way to protect Scotland’s interests, the Scottish people must have the right to consider it.”