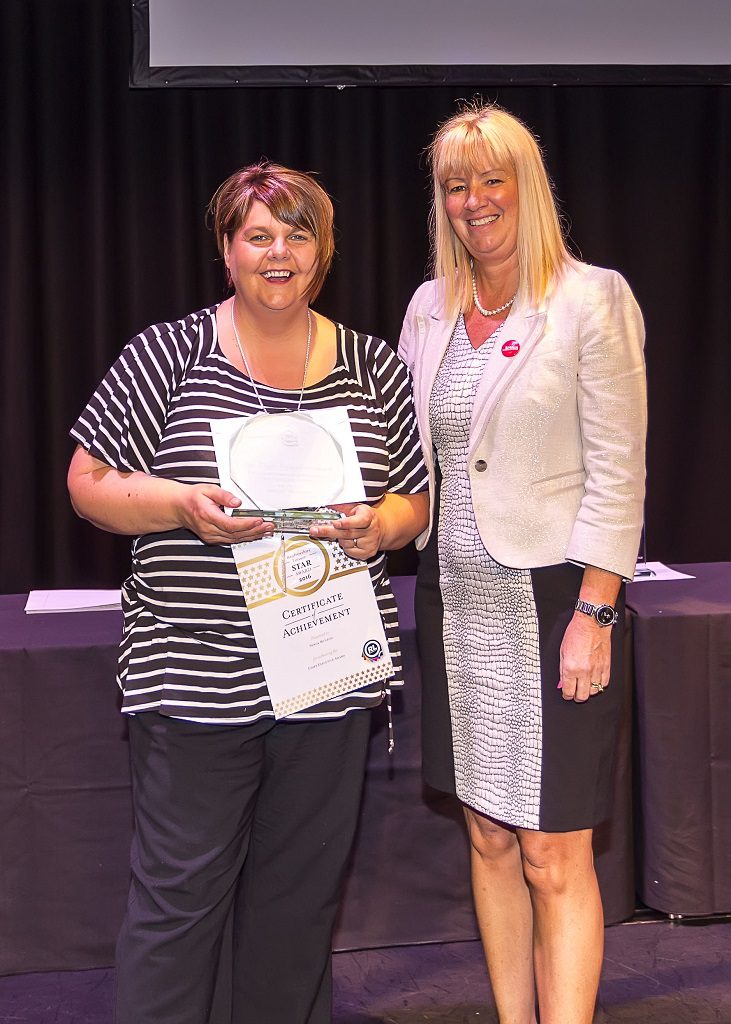 SENGA McLeod has made such an impression on the young people taking part in the sports coaching course she helps run, they’ve dubbed her their “second mum”. Senga is Renfrewshire Leisure’s community activity officer and part of her duties is mentoring the 16 to 21 year olds on the organisation’s Sports Coach Academy.

She is so highly thought of that Senga has been chosen as winner of the inaugural Chief Executive Award in the Renfrewshire Leisure’s STAR Awards.  These awards recognise achievements by staff in sports and leisure centres, libraries, museums, cultural venues and community halls. Dozens of awards – from gaining qualifications to long service and perfect attendance – were handed out at a ceremony held in Johnstone Town Hall.

But the biggest cheer of the night came when RL chief executive, Joyce McKellar announced Senga had won her award.

After being presented with the Chief Executive’s Award, Senga said: “I really can’t believe this as I never expected to win – it’s such a shock.
“It’s great working on the Sports Coach Academy as you can see the amazing difference it’s made to the young people. I feel really proud to see how far they’ve progressed and the journey they have gone on.
“And sometimes it feels like I’ve adopted these kids.
“We’ve given them an opportunity to gain qualifications that can lead to a career in the sports and leisure industry they wouldn’t normally have had.”

The Renfrewshire Leisure Sports Academy is a ten-month long paid traineeship for young people who aren’t working or in further education.

At the end of the course, the trainees will have gained sports and leisure qualification that will help them find jobs.
Joyce McKellar said: “Senga goes above and beyond the call of duty and she really believes these young people deserve a chance to better themselves in the world.”

One trainee, Rebecca Dunwoodie, 18, said: “Senga is like a second mum to us. She really inspires us and makes sure everything is OK for the trainees.
“Even if sometimes we need a shoulder to cry on, Senga is there for us.”

Another trainee, Guy Young, 18, added: “Senga is fantastic and so is this course. It has changed my life giving me confidence and the chance of finding a job.
“If it wasn’t for being on the Sports Coach Academy, I would just have been sitting around the house all day.”
Joyce also told the guests at the awards ceremony: “Everyone here tonight is an achiever and it fills me with great pride we have such a wide array of accomplishments across the company.
“We’re very fortunate to have such a skilled, enthusiastic and dedicated staff.”