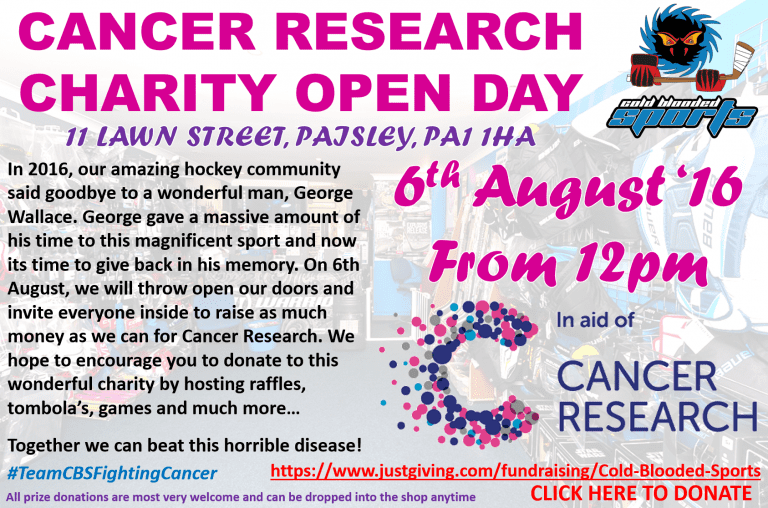 In January 2016 the local ice hockey community lost a wonderful character, in George Wallace to cancer and local ice-sports specialists, Cold Blooded Sports, are throwing open their doors on Saturday 6 August to remember him, whilst raising as much money as possible for Cancer Research. Steven Gardner, Director of CBS said “George was an integral part of the junior development hockey schemes at the Lagoon and laterly Auchenharvie. He was at every training session and game. It was only right that we done something to remember him by”.

“George and his family were huge supporters of the store since we opened in 2011 and he will be a big loss to the hockey family. We hope to raise a great amount of money in his memory.”

The event starts at 12midday with raffles, tombolas and even a ‘Beat the Goalie’ taking place in the car park behind the store, at 11 Lawn Street. There might even be a few special guests on the day!

Come down at any time throughout the day to try your luck, speak to the experts about all things hockey and even watch some classic hockey matches on the big screen in the shop.

There will be an opportunity on the day to win many great prizes including; signed, game worn jerseys; leisure passes from the Glynhill Hotel; training sessions from Planet Bodybuild and some exclusive items from Fighting Major Clothing.

All funds raised on the day and will go direct to Cancer Research who conduct research into the prevention, diagnosis and treatment of the disease.

If you are interested in donating to this great cause, you can do so on the day as well as online via justgiving.com/fundraising/Cold-Blooded-Sports.