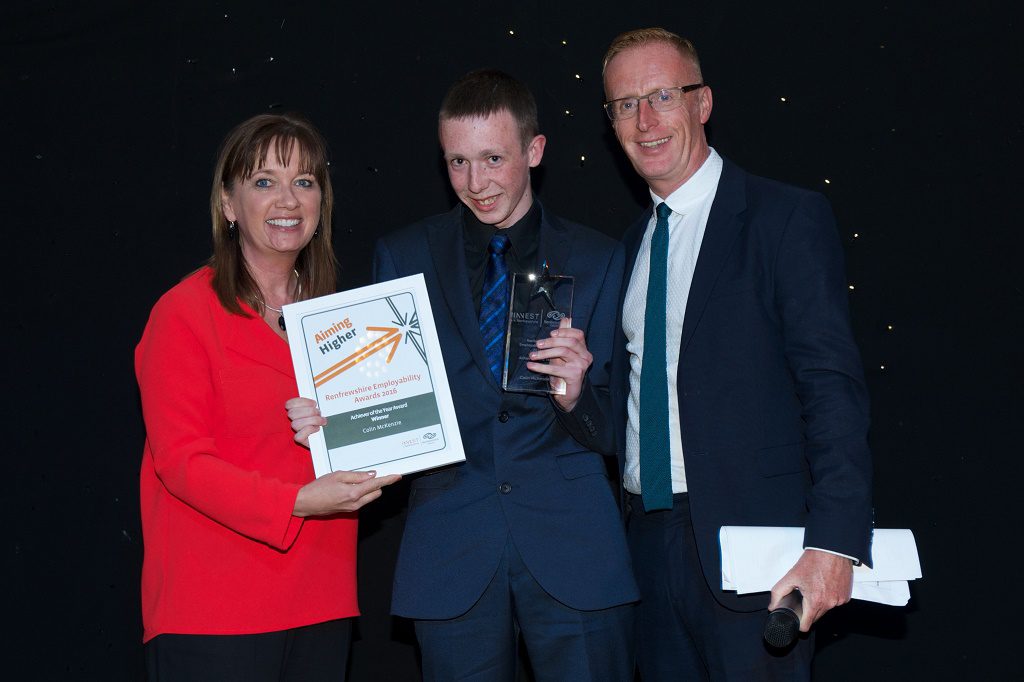 Renfrewshire’s  employability stars have been honoured at a glittering ceremony at the Normandy Hotel. BBC Scotland’s Bryan Burnett presented awards that recognised the people, public sector partners and businesses who have helped make Invest in Renfrewshire such an outstanding success.

Winners were selected from tremendously strong shortlists in categories such as Best Apprentice, CV Builder, and Most Promising Entrepreneur.

The award for Most Promising New Entrepreneur went to Catharine Anderson of Vouch for That. She said; “Renfrewshire’s a great place to start a business. I’ve had really useful support from Invest and it’s very encouraging to have our new enterprise recognised with this award.”

The Special Achievement Award went to Colin McKenzie of Project SEARCH, an employability programme for young people with learning disabilities. He said; “Project SEARCH has given me confidence and skills and it has helped me to find a job. Our whole class has had a brilliant year and we all feel that we can move into work and make a contribution to the world.”

Other award winners were:

Three of Renfrewshire’s businesses received Special Recognition Awards for their commitment to helping people prepare for work, enter work, and progress in work.

Scotland Excel was recognised for its commitment to creating and promoting new qualifications and helping people to progress in work. It has employed graduate interns and Modern Apprentices and sought to attract unemployed people to the procurement profession.

Julie Welsh, Director of Scotland Excel said, ‘We find that Invest’s partnership approach means that we can recruit and develop staff while also giving local people career opportunities in our profession. We’re delighted with our award and will continue to work with Invest to strengthen Scotland Excel, people’s prospects, and the wider economy.”

The awards were also an opportunity to reflect on the successes of Renfrewshire’s  economic regeneration.  For four years, the council’s programmes have been creating jobs, reducing unemployment, tackling poverty, driving a cultural revival and making life better for individuals, families and communities throughout Renfrewshire.

Councillor Mark Macmillan, Leader of Renfrewshire Council said; “Our success story has been driven by Renfrewshire’s people.  I’d like to thank those who run businesses and create jobs and learning opportunities.  We should also recognise those people, at all stages of their careers, who have committed to building their futures in Renfrewshire.

“In the three years from the launch of Invest, Renfrewshire’s youth unemployment ranking went from 27th in Scotland (that’s 6th bottom) to being 4th best. This means that our young people can look forward to building careers and futures in our communities.  It is now within our grasp to end long term youth unemployment in Renfrewshire. That will be an amazing achievement and it is part of our Aiming Higher agenda.

“We’re aiming higher to put Renfrewshire where it should be: at the heart of the region’s economy; recognised as a centre of creativity and excellence; admired for scale of our regeneration; and an inspiration to the world.”