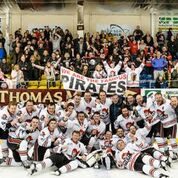 Renfrewshire’s Provost Anne Hall will recognise the success of a local ice hockey team with a civic reception on Friday night. The team will be rewarded with a special reception at the Glynhill Hotel in Renfrew where the Provost will say a few words of congratulations to celebrate both their victory and their 70 years in existence.

This is only the third time the Pirates have won the prestigious trophy since the club was re-formed in 1992.

The club were founded in 1946 but faced years in the wilderness before they were re-launched with the opening of a new ice rink.

The team were recently featured on the pint glass issued to all visitors at the ever popular Paisley Beer Festival to celebrate 70 years since their foundation.

“It is terrific achievement to win a national trophy and it is only right that they are rewarded for this feat.

“Renfrewshire should be proud to have had them as a representative for the past 70 years and I wish them all the success in the defence of the trophy next season.”

To find out more about the Paisley Pirates visit:  www.paisleypirates.co.uk.

Glasgow News? Daily Updates part of our network
What will the City Deal do for your community? See the plans and have your ...