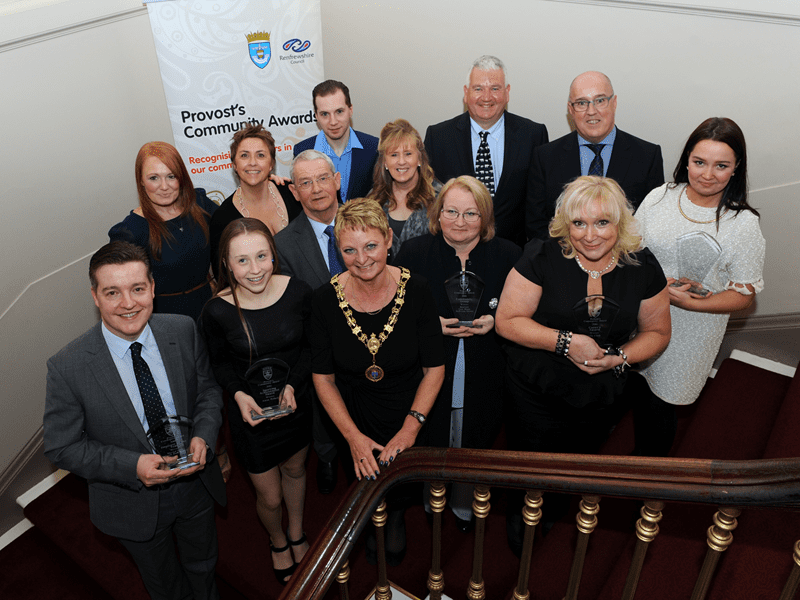 The stars in Renfrewshire’s communities were celebrated at this year’s Provost’s Community Awards. Renfrewshire’s Provost Anne Hall was joined by comperè Gina McKie to help celebrate the achievements of unsung heroes in the local community.

The winners, their families and the people who nominated them were invited to the ceremony, which was held in Paisley Town Hall.

The winners this year were:

The Freedom of Renfrewshire was also awarded during the event to Lochwinnoch resident Corinne Hutton, who started her own charity to help people who have lost limbs after experiencing the loss of her own hands and feet in 2013.

Finding Your Feet provides practical, emotional and financial support to individuals and has raised over £250,000 since its inception to help those living with limb loss.

Corinne is the fourth recipient of the award after sculptor Sandy Stoddart, Charleston Drummer Tony Lawler and the Argyll and Sutherland Highlanders, 5th Battalion, The Royal Regiment of Scotland.

The awards ceremony also recognised the achievements of seven outstanding members of the community through the awarding of the Provost’s Distinction Certificates.

Provost Hall said: “It is a privilege to recognise those who contribute so much to our communities through their dedication, hard work and success.

“Each year the nominations we receive are humbling and it is inspiring to discover the work that goes on in our communities. Choosing a winner in each category is extremely challenging and I must thank everyone who took the time to nominate.

“This year we also awarded Corinne Hutton with the Freedom of Renfrewshire. Her attitude and spirit to overcome adversity and help advance the lives of others through her charity cannot be understated. I am delighted she has received this recognition.”

Corinne has been honoured for her charity work which has continued despite a life-changing illness in 2013. Having suffered acute pneumonia and septicaemia, surgeons were forced to amputate her hands and legs below the knee.

She is fondly know by the UK media as ‘The Bionic Mum’; however her son Rory (6) prefers calling her his ‘X-Mum’.

Her courage and determination has helped her raise over £250,000 achieved through the likes of completing a gruelling 5km assault course, becoming the first quadruple amputee in history to climb Ben Nevis, and breaking a record by abseiling 140 feet.

Corinne responded by establishing a charity, Finding Your Feet, which offers practical, emotional and financial support to individuals and families who have suffered limb loss or life-changing physical trauma.

Celebrities and sports stars including Andy Murray, Mel Gibson and Gerard Butler have given their backing to Corinne’s outstanding effort to help others.