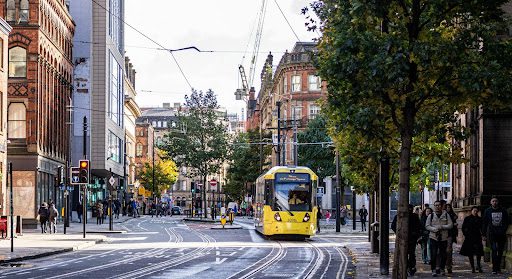 Manchester, for many tourists, is primarily associated with football. It’s not surprising because the world-famous Manchester City and Manchester United are based here. However, it is also known for its scientific, industrial, technical, and musical achievements. So, set out to explore this city, home to Oasis, The Smiths, Tyson Fury, and Anthony Burgess.

If you want to thoroughly explore every corner, opt for the Manchester walking tour. By going around the city on foot, you can immerse yourself in the atmosphere and not miss important historical sites.

You can start your journey from St. Peter’s Square, where Manchester Central Library is located. It houses more than a million books and historical documents (including those published before 1500). The entrance is free, so you can come in and look around. The building has an unusual round shape and is inspired by the Pantheon in Rome. Nearby you can see Neo-Gothic Manchester Town Hall.

Almost next to the library is the Whitworth Art Gallery, which is part of the Manchester State University. A significant piece of the exhibits here is dedicated to the textile industry. Still, you can also get acquainted with the works of Van Gogh, Picasso, Gauguin, and other famous artists (there are more than 55000 items in the collection). By the way, in 2015, the gallery received the museum of the year title.

The Science and Industry Museum

It was built on the first passenger railway station site, and now you can find the world’s first programmable computer and the first spinning machine here. A distinctive feature of the museum is many interactive elements, including sections with air and space technology. Visitors can view industrial equipment in operation or observe a production process simulation.

The next stop on your tour could be the second-largest stadium in the UK, Old Trafford, home to Manchester United. It has a museum and a gift shop. You can even test the football pitch as part of this stadium tour. If you’re a Manchester City fan, you need to look for the Etihad Stadium, which is this team’s home.

Not far from the stadium is the Imperial War Museum, which has a very unusual shape. The huge building is divided into several sections: each for a period of several years, which demonstrates certain historical wars. There is an extensive exposition on the theme of the First and Second World Wars, as well as the conflicts of the Cold War period.

After visiting the museum, you can take a stroll along the waterfront or visit other notable places in Manchester:

Get to Know Manchester Better

Manchester is an amazing city where industrial quarters and buildings have been turned into museums, nightclubs, and cafes. Although there are no really ancient monuments here since the city suffered during the Second World War, some historic buildings are still saved. You will definitely not experience a lack of day and night activities.

Glasgow News? Daily Updates part of our network
4 advantages of decorating your home with personalised stickers