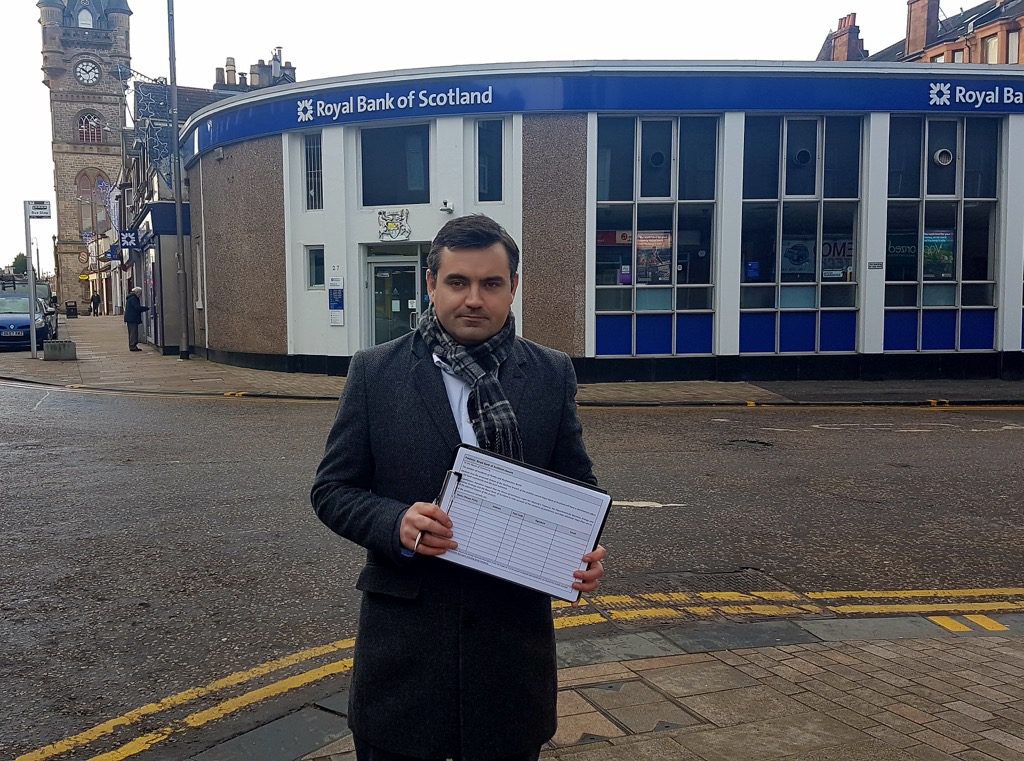 Gavin Newlands, SNP MP for Paisley and Renfrewshire North, has launched a parliamentary petition to save the local Royal Bank of Scotland bank branch, in Renfrew. Earlier this month, RBS announced that they were closing 62 bank branches across Scotland, including the popular branch in Renfrew.

Mr Newlands has now set-up a parliamentary petition which calls on The Treasury and The Department for Business, Energy and Industrial Strategy to save the local taxpayer owned RBS branch, which he will present to the House of Commons after the New Year.

The Member of Parliament for Paisley and Renfrewshire North is urging as many local constituents as possible to sign the petition to help save this widely used local bank branch.

“I have met with bank bosses and campaigned locally to save previous branches in the constituency but RBS is different in that, we the public, still own this bank. Huge amounts of taxpayers money was used to bail RBS out, RBS should not therefore be bailing on us. This closure would leave one RBS branch in my entire constituency situated on Paisley’s one way system, hundreds of yards from the nearest bus stop. It is local independent businesses and those who have to rely on public transport that will bear the brunt of this closure, with the elderly in particular being impacted with many unable to access modern online banking that the bank pushes as an alternative.

“We all need to work together to send a message to Ross McEwan, the CEO of RBS, that this will not be taken lying down. Locals can sign the petition by visiting my local constituency office or by popping into one of the supporting businesses in Renfrew town centre. After the New Year, I will deliver this petition into the House of Commons, piling on the pressure for the Royal Bank of Scotland to reverse this short-sighted decision.”

Glasgow News? Daily Updates part of our network
CHIVAS BROTHERS DONATES £13,000 TO SOCIAL BITE’S SLEEP IN THE PARK EVEN...