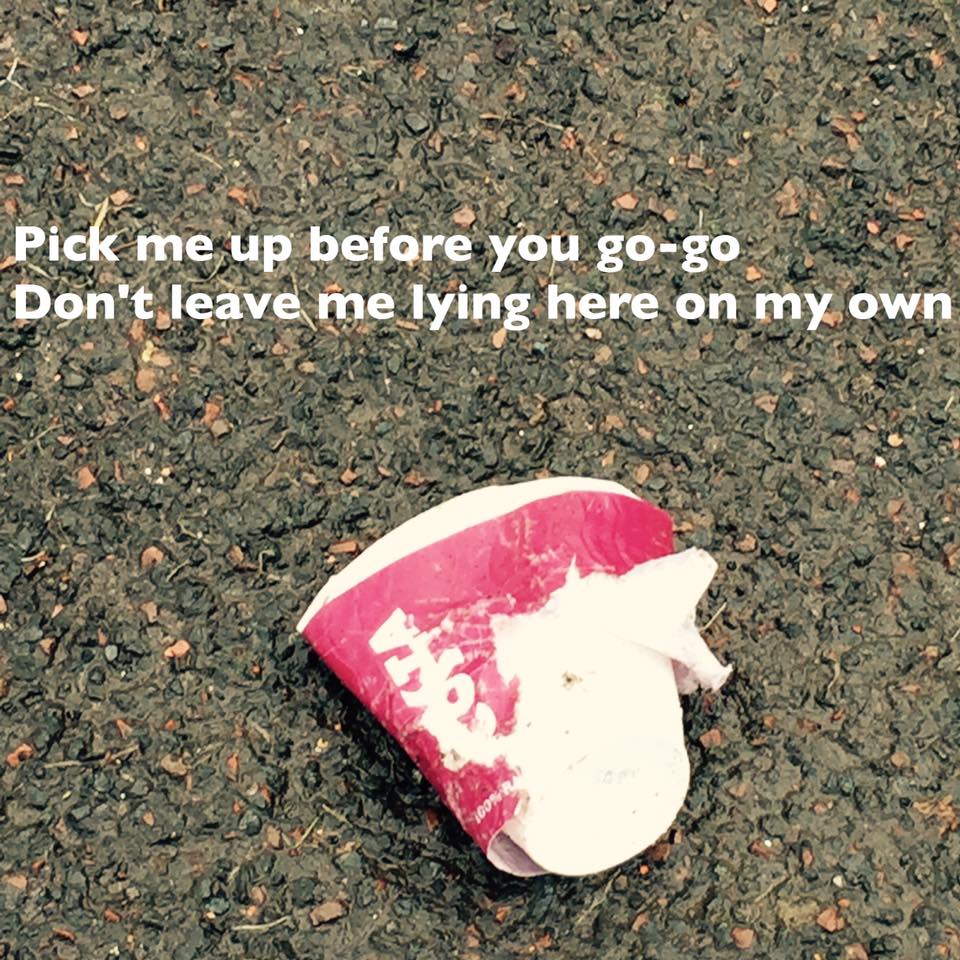 A Renfrewshire community group is to have its artwork displayed in Glasgow’s Gallery of Modern Art as part of a major exhibition by environmental charity Keep Scotland Beautiful.

Communities from across Scotland were invited to take part in a competition which challenged members of the public to take photographs of drinks litter and cup lids discarded in their local communities.

Erskine Community Garden was selected for its submission titled ‘Pick me up before you go-go’ and will join two other photographs in the final exhibition which takes place on 24 and 25 October.

The photo was taken at Barsail Primary School as part of a ‘Team Up to Clean Up’ litter pick which collected 20 bags of rubbish, including the now famous coffee cup.

Volunteer Heather Clissit, who took the wining photo, said: “We decided to enter the competition as it sounded like a great way to encourage litter picking and giving a fantastic platform to emphasise the issue of single use containers.

“We are really happy and excited to have made it into the top three and look forward to visiting the exhibition.

“We want to say a huge thank you to Keep Scotland Beautiful for always being so supportive over the years that we’ve had litter pick and also to Renfrewshire Council who are great at providing equipment and advice.”

Renfrewshire Council’s Team Up to Clean Up campaign is a joint initiative which encourages the community to take pride in where they live and work by undertaking community clean ups, being a responsible dog owner and recycling wherever possible.

To support the campaign, the Council has increased its gully cleaning, road sweeping and litter picking services as well as adding additional resource to its Rapid Response Team, which all comes as part of an additional £250,000 investment.

Councillor Cathy McEwan, Convener of Renfrewshire Council’s Infrastructure, Land and Environment Policy Board, said: “I’m delighted one of our local community groups will have their artwork showcased in Keep Scotland Beautiful’s exhibition.

“Through our Team Up to Clean Up campaign, we are encouraging the community to get out there and take pride in their local community and Erskine Community Garden are a shining example of what can be achieved.

“By coming together as a community, they have received this fantastic recognition which I hope will bring the issue of littering and recycling to the forefront of people’s minds in an abstract and intriguing way.”

The Keep Scotland Beautiful exhibition will take place at the Gallery of Modern Art in Glasgow on 24 and 25 October where one of the three community entries will be announced as the overall winner.

The winner will subsequently be awarded with a professionally designed campaign collateral pack, featuring their own submission, to support them with their anti-littering activities locally.

Nicola Turner, Community Projects Officer, at Keep Scotland Beautiful, said: “We were inundated with creative entries to this competition – capturing discarded drinks litter and cup lids from all across Scotland. Selected from a shortlist of 13, the winning images were powerful and creative. Congratulations to all of them.

“It is exciting that so many communities from all over the country engaged in the issue of litter and discarded drinks packaging. The entries revealed that much more needs to be done to reduce litter levels in Scotland and I hope that our exhibition can showcase not only the issue, but also a range of solutions.

“I look forward to seeing the winning images on display in the Gallery of Modern Art.”

Further information on the competition can be found at www.keepscotlandbeautiful.org.

To find out how to get involved or for information on the Council’s additional activity visit: www.renfrewshire.gov.uk/teamuptocleanup.