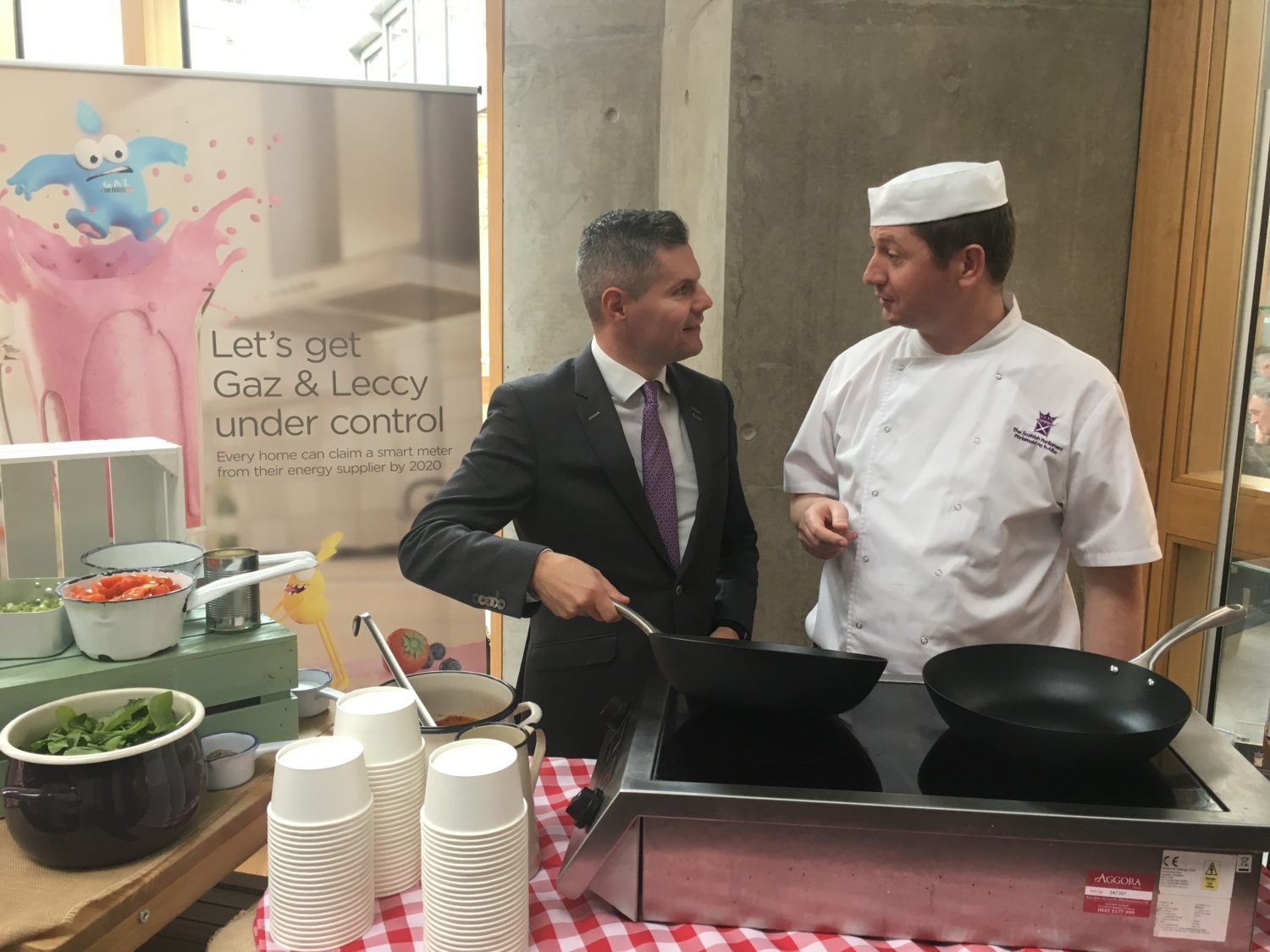 Renfrewshire North & West MSP Derek Mackay is looking forward to saving money on his energy use in the kitchen after attending a cookery event held by Smart Energy GB to highlight the benefits of smart meters to people across Scotland, run as part of Scottish Food & Drink Fortnight.

Mr Mackay joined fellow MSPs to watch Liam MacDonough, Executive Chef in the Scottish Parliament, cook up a special energy saving recipe that he developed to demonstrate that cooking locally sourced, fresh meals for your family doesn’t need to be expensive. With a serving for four people costing just 5p in energy, the stir-fried chicken noodles with spinach dish is a quick, cost-effective meal.

A smart meter was used to measure the energy costs of cooking the dish, displaying the results in pounds and pence on a digital display.

The demonstration was part of Food & Drink Fortnight, run by Scotland Food & Drink. The recipe was also served in the Scottish Parliament restaurant that day, with Smart Energy GB staff on hand to give energy saving advice to MSPs.

Amongst those who haven’t upgraded to smart meters yet, the appetite to get one installed soon is also high. Almost half (49 per cent) of those in Great Britain who don’t have a smart meter yet would like to have one installed in the next six months. Smart meters are also an important motivator when it comes to behaviour change and reducing energy waste at home, with eight in ten (80 per cent) of people with a smart meter having already taken steps to reduce their energy use. (August 2017 Smart energy outlook).

After hearing more about the technology from Smart Energy GB, the voice of the smart meter rollout, Mr Mackay said:

“If you’re cooking at home without a smart meter, you won’t know how much energy you’re using and how much it’s costing you. Through watching the cookery demonstration, I was delighted to see first-hand how smart meters will give us all much more control of what we spend on gas and electricity, and finally put an end to estimated bills.

“I would encourage my constituents to call their energy supplier today and ask for an appointment to get their own smart meter fitted.”

“Scottish Food & Drink Fortnight is an excellent opportunity to celebrate what we have here in Scotland and to understand why the country has earned the reputation as a Land of Food and Drink. There are so many different ways to get involved, whether that’s by changing just one thing about the way you interact with Scottish produce or cooking up delicious recipes using fresh, local ingredients and very little energy!”

Smart meters bring everyone in Renfrewshire and across the rest of Scotland and Great Britain accurate bills. They also mean that you can see, for the first time, exactly how much energy you are using in pounds and pence, and in near real time. The inconvenient prepayment system will also be completely revolutionised for the many people currently using these meters.

Contact your energy supplier today about getting your smart meter installed.

What Impact Could the Leaked Brexit Immigration Plans Have?
Scroll to top