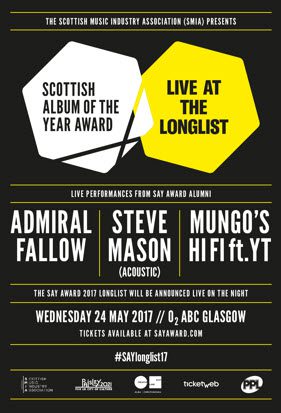 On Wednesday 24th May, The SAY (Scottish Album of the Year) Award 2017 Longlist will be revealed in front of a live audience at Glasgow’s O₂ ABC. Home to The SAY Award ceremony back in 2015, the venue welcomes the Award back for this new ticketed event where SAY Award alumni Admiral Fallow, Steve Mason (acoustic) and Mungo’s Hi Fi will perform live, and 20 outstanding Scottish albums will be announced as The SAY Award 2017 Longlist. Each of these 20 albums will be in the running for the £20,000 grand prize, as well as the coveted title of Scottish Album of the Year 2017.

Tickets go on sale at 10am on Wednesday 12th April, and will be available at sayaward.com.

“To announce this year’s SAY Award Longlist, we’re delighted to introduce this fantastic new live music event in Glasgow, allowing music fans to engage with the award more than ever before. Admiral Fallow, Steve Mason and Mungo’s Hi Fi have each been celebrated through previous SAY Award campaigns for fantastic album releases, so what better way to announce this year’s top 20 albums than by inviting them to play at ‘Live at the Longlist’, a new event celebrating great Scottish albums both old and new”.

Compelling singer-songwriter Steve Mason was Shortlisted in 2016 for his album “Meet the Humans”, 2014 for “Monkey Minds in The Devils Time”, and Longlisted in 2012 for “Ghosts Outside” with Dennis Bovell. “Meet the Humans”, Steve’s latest album, is an eclectic mix of dance, pop, folk, dub and deep house influences. His last Glasgow show at the Art School in October was a sell out, so this is an un-missable opportunity to see him play.

Glaswegian chamber popsters Admiral Fallow formed in 2007 and released their adored debut album “Boots Met My Face” in 2011, and its widely acclaimed successor, “Tree Bursts In Snow“, the following year (Shortlisted for The SAY Award 2013). Their extraordinary third record, “Tiny Rewards” received many plaudits since its release in May 2015, and was Longlisted for the SAY Award in 2016. Heartbreakingly beautiful, sonically audacious and lyrically bewitching, it heralds a true progression in the band’s creative approach.

Back in 2012, Glaswegian based production house Mungo’s Hi Fi were shortlisted for the inaugural SAY Award with “Forward Ever”.Having built themselves a refreshing reputation for open-minded no-rules sound, they transform reggae, ska and dubstep into loud cyber-esque rhythms. They will be joined by reggae MC, YT, to perform a live DJ set at ‘Live at the Longlist’.

This inaugural event will showcase some of Scotland’s best musical talents, along with the exclusive announcement of The SAY Award 2017 Longlist. It will undoubtedly be the most exciting live music event in May, not to be missed by any music fan.

The SAY Award 2017 campaign kicked off on 1 March by inviting artists, labels and the public to submit eligible albums released between 1 April 2016 and 31 March 2017 to The SAY Award website. Submissions closed on 31 March, and with just shy of 300 eligible albums submitted, it’s now down to 100 impartial nominators chosen from press, radio, music venues, jazz, classical, traditional folk and elsewhere in the arts to consider the titles from the Eligible Albums List and nominate their five favourites. Ranking them in order of preference and with points assigned to each choice, the highest scoring 20 albums will make up The SAY Award Longlist, which will be announced at “Live at the Longlist” on 24th May.

Launched by the Scottish Music Industry Association (SMIA) in 2012, The SAY Award has been key to showcasing Scotland’s wealth of musical talent on a global scale. Wielding one of the UK’s most lucrative prize funds, The SAY Award champions the extraordinary strength and diversity of Scotland’s musical landscape.

The Longlist will be further whittled down to a shortlist of just 10 albums, one of which will be chosen by the public during a 72-hour online vote and 9 chosen by judges. The shortlist will be announced on June 15th as part of a BBC Quay Sessions show, with the award ceremony then taking place on June 28th in the surroundings of Paisley’s elegant Town Hall, in support of Paisley’s bid to become UK City of Culture 2021. The winning artist will pick up a £20,000 cash prize, provided by long term Award partner Creative Scotland. The nine runners up will each be awarded a £1,000 prize, as well as an exclusively designed piece of artwork from the SAY Award Design Commission.