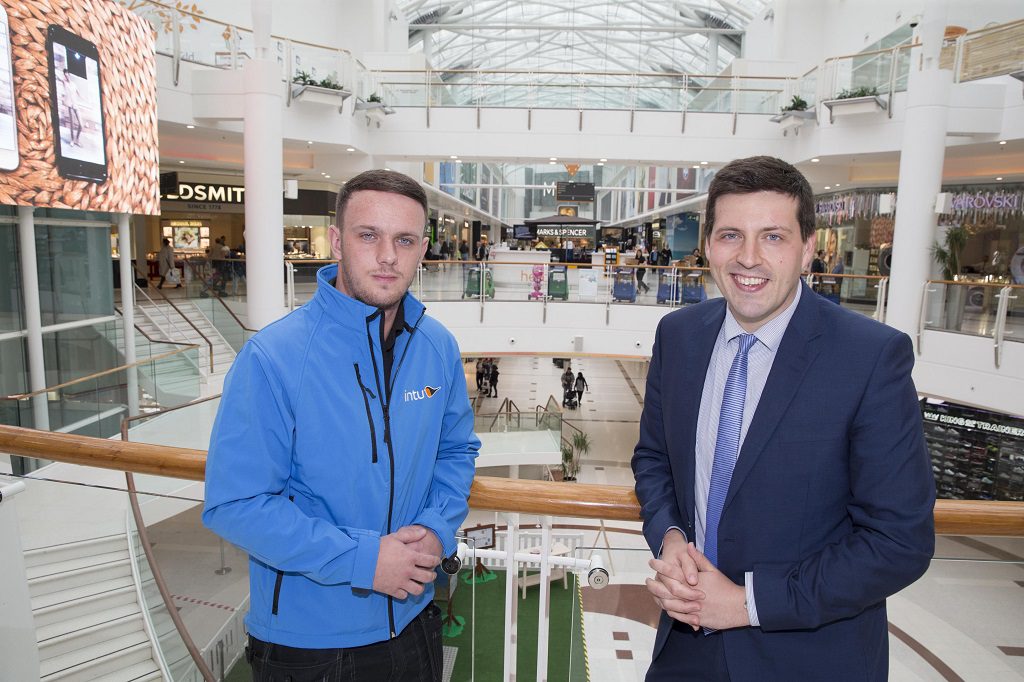 The 22-year-old technical apprentice works at the intu Braehead shopping centre and met Mr Hepburn during the minister’s visit to the mall.

William scooped the Young Achiever of the Year category at the annual SCEPTRE Awards, which recognises best practice and the best people working in shopping centre management throughout the UK. And when Mr Hepburn heard about the achievement, he asked to meet William, who is in the third of a four-year service and maintenance engineer apprenticeship.

The shopping centre has funded a partnership with West College Scotland and retailers to create the Retail Gold initiative, which provides training, qualifications and work experience to help people – particularly young job seekers – to find work in the retail sector.

The intu Braehead community development manager, Lydia Brown is also a board member of the Scottish Government’s Developing the Young Workforce programme in the West of Scotland.

Mr Hepburn was also told about intu’s support for helping young people into work nationally, with 30 apprentices being taken on this year.

The minister said: “It was a pleasure to visit Intu Braehead today to hear about the excellent work going on to support young people into rewarding jobs.
“I had the chance to meet with William MacAskill, an award winning apprentice at the company and congratulate him on his well-deserved retail award.
“Modern apprenticeships make a real contribution to the Scottish economy. They offer our young people better jobs prospects and have a positive impact on businesses, bringing value to both employers and the economy.
“This is why I am delighted that we have surpassed our target to deliver 25,500 modern apprenticeships this year and we have committed to increase that target to 30,000 by 2020.”

William MacAskill said: “I really appreciate Mr Hepburn taking the time to visit intu Braehead to find out about my apprenticeship and the other things the company does to help young people into work.
“I’m a great believer in getting the head down, working hard and being determined to do the best I can. And I’d tell any young apprentice just starting that if they put in the effort they’ll reap the rewards.”

General manager of intu Braehead, Gary Turnbull added: “We are one of the biggest employers in Renfrewshire and the west of Scotland and we do all we can to help people – particularly young people – find work.
“The retail and leisure sector provides a huge employment opportunity. We want to help national and local government, schools, universities and colleges give people the best chance of finding a job in places like intu Braehead.”