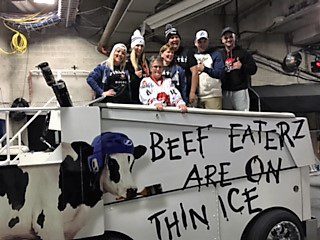 Paisley Pirates may be found these days playing in the Scottish National League, as their recent success in the Scottish Cup illustrates, but they recently made an appearance during the Holy Grail of competitions to ice hockey fans, the Stanley Cup, in Tampa, thousands of miles from their regular base at the Braehead Arena. Coach Ian Turley explained, “Whilst in Florida, we were in contact with our friends at Tampa Bay Lightning who were about to take on the Pittsburgh Penguins in the Eastern Conference Final of the Stanley Cup.” “Their response was amazing as well as sorting tickets for us, they invited us to come for a tour of the arena, and they didn’t just arrange for us all to get a ride on the Zamboni, the ice resurfacing machine, in front of over 20,000 fans, they also put up images of our own players on their giant TV screens, and told the crowd all about the Paisley Pirates from Scotland, so they really went out of their way to give us a good time, and it was certainly a wonderful bit of promotion for the club and the area, appearing in front of an audience like that, something which we’ll certainly never forget. A lot of the guys can now say, quite legitimately, that they’ve appeared at the Stanley Cup, a claim which not every player in Scotland can make, while there’s now literally thousands of folk who follow the NHL now know something about the Paisley Pirates from Renfrewshire.”

He went on, “We took over a team jersey as a small gesture, and it was worn by the Vice President for Guest Experience, Mary Milne, during our visit, who told us that it would go up on their wall, so a bit of the Paisley Pirates will forever be seen at the home of the Tampa Bay Lightning, not a bad bit of recognition for the club. We’re always trying to promote the town of Paisley and the wider locality of Renfrewshire wherever we go, and I think we can certainly say “mission accomplished” this time round!”

“The people at Tampa Bay said they have a group name for folk who support the club from afar, “Distant Thunder”, and the Paisley Pirates are now members of a very elite group of people. We might not quite play to the standard of the NHL, but in our own neck of the woods, we’ll certainly be looking to brew up a storm in the new season, courtesy of this boost from our new friends 6,000 miles away!”

CLEAN SWEEP FOR JOHNSTONE BANDS AT SHOTTS
Scroll to top