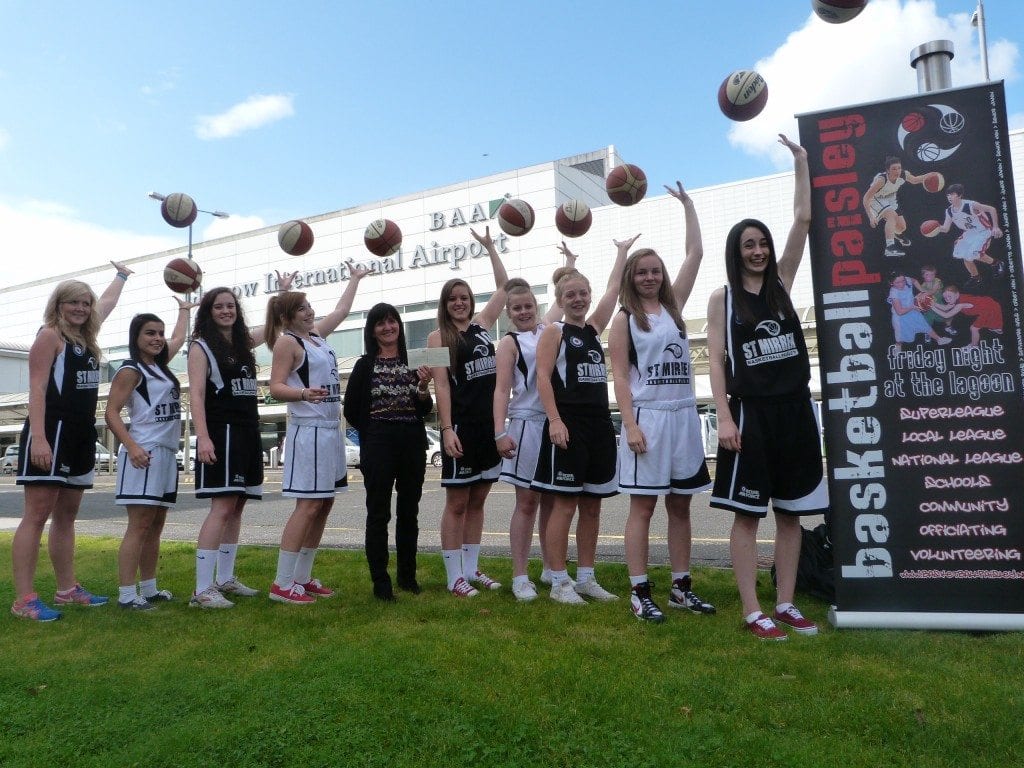 A group of promising young basketball players are set to play in a prestigious international tournament with a helping hand from the Glasgow Airport FlightPath Fund.

The St Mirren U18s girls team will test themselves against the best in Europe after being invited to take part in the Girona Basketball Tournament, which takes place every summer near Barcelona. The Paisley-based team is made up of 10 girls, some of whom are already internationalists, from Paisley, Erskine, Renfrew, Bishopton, Bridge of Weir and Houston. Their coaching team insists the event will enable them to develop as players by taking on the best that Europe has to offer.

They will relish the challenge after dominating in their own age group on these shores, winning the National League for the last three seasons – remaining undefeated in the process – and taking last season’s Scottish Cup.

The girls will depart for Spain on Thursday 20 September, with the opening friendly match taking place the following day, and £1,400 from the FlightPath Fund will be put towards the overall cost of the trip.

basketballpaisley manages the St Mirren women senior team as well as the U16s and more than 20 other teams of various ages and abilities. It recently launched a new logo with the slogan ‘Participation, Potential, Performance’.

The organisation has to meet the cost of flights, accommodation and meals during the trip. It also hopes to invest in new equipment, kit and additional training in advance of the event.

Chief Executive Lindsay Lang, who founded basketballpaisley in 1995 and is assistant coach of the team, said: “Spanish basketball and European basketball in general is very strong compared to the game here and this tournament will be another level for the girls, who have been very successful at national level here in Scotland.

“While many of them have played in Europe before, and represented their country, being invited to take part in this tournament is a benchmark. The money from the Glasgow Airport FlightPath Fund will help us meet the cost of the trip and we are extremely grateful for it.

“We hope the team will be able to compete, but regardless of the results it will be a great learning curve for them as it’s generally a different level of fitness and intensity with overseas teams. The girls are very excited about it.”

Maureen Jamieson, Glasgow Airport’s head of procurement, said: “basketballpaisley is a fantastic organisation which promotes participation in the sport at all levels in addition to managing several successful teams which have been dominating at national level in Scotland for several years now.

“To be invited to compete in an international tournament is a great achievement and we are happy to support the development of the very successful St Mirren U18s girls team. We wish them every success in the event, but most of all we hope they enjoy taking part in it.”

The Glasgow Airport FlightPath fund is a community funding programme designed to ensure that surrounding communities share in its success. In 2011 it distributed more than £170,000 to 60 organisations.