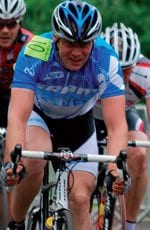 The Scottish Cycling Circuit Race 2011 will head back to Renfrewshire for the third year in a row but will this year move from Erskine waterfront to Paisley town centre.

Cyclists, ranging from under 8s to the fastest adult riders in the country will compete in their respective categories on this fast and technical course.

The popular event will take place on Sunday 21 August . As well as the races there will be a host of entertainment and activities on offer for spectators including The Clan cycle stunt team showing off their skills.

Councillor Marie McGurk, Convener of Renfrewshire Council’s Environment and Infrastructure Policy Board, said: “This will be the third time the Circuit Race Championship will be held in Renfrewshire and due to its growing popularity we’ve decided to move it right into the heart of the town centre. This will give riders a new challenging course and make it great backdrop for all the excitement and fun on the day. This is a major cycling event and it is also a great family so I hope to see lots of people heading into the town to cheers on the competitors.”