To mention King Street to most Paisley folk they’d probably think of the road between Broomlands and Craigielea, or the Ferguslie Park Housing Scheme, however the one we are focussing on was at the other side of Paisley, off Lonend and where the Mecca Bingo Hall now sits. Kings St, Saucel was the location of one the largest Whisky Distillery in Scotland, having taken over the Saucel Brewery on the other side of the street, occupying some Eight acres of ground. It was built in 1793 with additions being built in 1832, 1853 and 1857, which reflected the progress of the business. 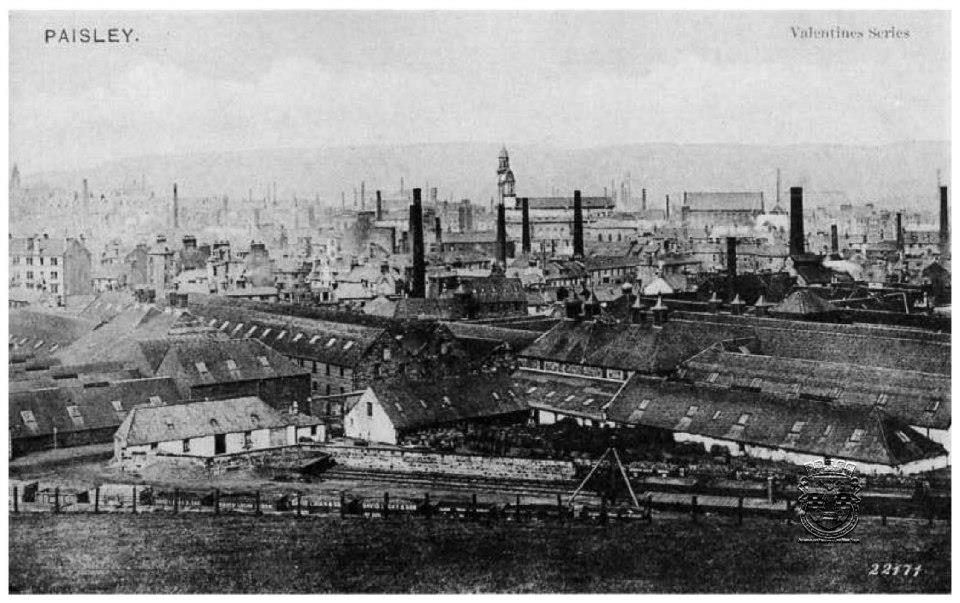 The Saucel , or Paisley Distillery as it was also known, sourced its Water originally from the Espedair Burn which flowed down from the Gleniffer Braes but due to the development of Dyeworks and Bleachfields along the course of the Espedair the stream became unused and the Proprietors of the time, Messrs. Stewart & Co., had a large reservoir built at Hawkhead which was fed by the Oldbar Burn, it was then conveyed back the distillery, some Two miles distant, by Pipeline. Another source of water at their disposal was an onsite Artesian Well, 400 Feet deep and yielding a supply of good enough quality for distilling and mashing.

Facilities of the time are known to have been Six large Granaries capable of holding 8000 Quarters of Grain, Six Peat Kilns, Four Malt Stores, Three pairs of Mill Stones, A Tun Room with Three Mash Tuns. Alfred Barnard ,writing for his blog in ‘Harpers Weekly Gazette’ back in 1887 and his Book ’The Whisky Distilleries of the United Kingdom’ of 1889, probably describes the Distillery best : There are six large Granaries nearly 300 feet long and 56 feet wide, holding in all eight thousand quarters of grain, and eight well ventilated Malt Barns of an average of 150 feet long by 50 feet broad. The six Kilns are of an average each 0 h 40 feet square, and all of them are fitted with the good old fashioned furnaces, where nothing but peat is used. Same of the peats are brought from the Gleniffer Hills in the district, but a large quantity is shipped from Ireland and the Hebrides. All the Kilns are floored with the patent wire cloth flooring The four Malt Stores, which are nearly 200 feet long by 50 feet broad, adjoin the Kilns, and the Malt is conveyed by Hoppers, of which there are- two sets, and three pairs of Mill Stones. 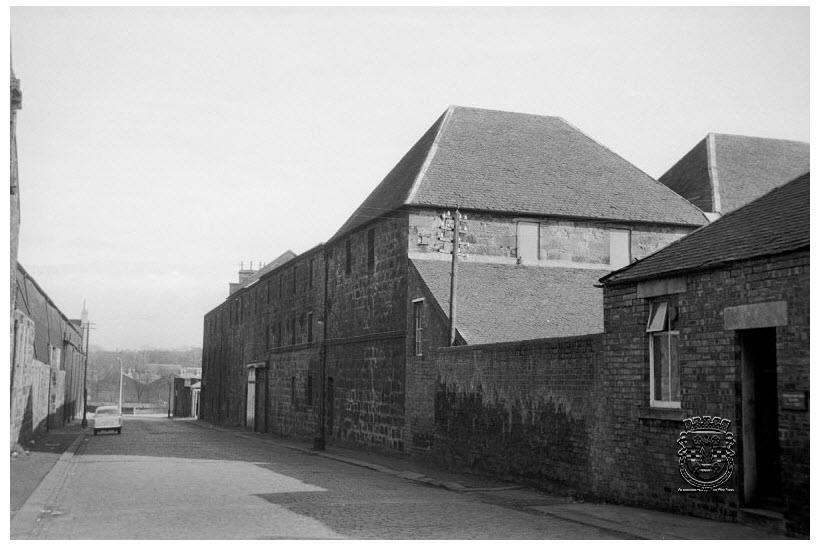 From this department it is dropped by sluices into the Tun Room which is 60 feet long, which contains three large Mash Tuns, two of which measure 24 feet in diameter and 6 feet in depth, and the other about half that size; the two farmer having a capacity of 16,000 gallons, and each fitted with the usual stirring gear. Here also are three heaters and three tanks heated by steam. From the Mash Tuns the worts run into one of the two Underbacks beneath, which are capable of holding 12,000 and 5,000 gallons respectively. It may here be mentioned that the Draff is conveyed by a screw and elevator to the Draff House adjoining the Mash House, and carts can he drawn in and remove the same without any trouble. From the Underbacks the worts are pumped into Coolers away up in the roof of the buildings, and to the three large Miller’s patent Refrigerators. From these it descends to the Washbacks, of which there are twenty, holding from 12,000 to 45,000 gallons respectively. It is then pumped by Centrifugal Pumps into the large Wash Chargers, holding 14,000 and 28,000 gallons respectively. From thence it passes to the intermediate Wash Chargers, one holding 14,000 and the other 45,000 gallons. From these it is pumped into the Stills, of which there are eighteen. The two Still Houses are lofty buildings each 100 feet long, and the Stills which are capable of holding in all 45,000 gallons are mostly of the old Pot kind, and there is besides a Coffey’s Patent Still.

The Spirit from the Stills passes to the Worm Tubs, and thence through a vast safe and sampling safe to the Low Wines and Feints Receivers, large wooden vessels holding 3,000 and 5,000 gallons respectively. From these it passes to the four Spirit Vats, capable of holding 20,000 gallons, which are situated in the Spirit Store, a large and lofty building measuring 70 feet by 4D feet. Here it is casked, weighed and branded, and taken to the Ware- houses, which are eight in number, and containing several thousands of casks. They are mostly 140 feet long by 30 feet broad, and contain Whiskies of various ages. The four principal ones, together with the Excise Offices, are enclosed in a walled-in yard on the opposite side of the Still House. Within this enclosure is also an export bottling and case department, a two decker building 50 feet by 60 feet, wherein the Whisky for export only is labelled under the Trade Marks of the “Lion & Crown” James Stewart & Co. and cased. These Warehouses contain many cases sealed and hearing the Excise Stamp, waiting for shipment.

In the Engine House there are two forty horse power engines, and eight Boilers, 23 feet long by 8 feet in diameter. Within the works there is an extensive Cooperage for the repair and storage of casks; also a Joiner’s and Engineer Shop, Smithy, and Stabling for six horses.

The precautions against fire are very complete, every floor having a plentiful supply of water laid on with the necessary hose attached. About one hundred persons are employed in the works. The Whisky made is pure Malt and Grain, and is chiefly sold in Scotland, England, Ireland and the Colonies. The annual output of this Distillery is about One Million gallons. The Chief Excise Officer is Mr. Mathison, and there are fourteen others besides engaged on the premises.

Image descriptions::
Looking over Paisley from Saucel Hill, the Saucel Distillery in the foreground

Saucel Distillery, King St, Saucel, looking down to Lonend and the Cart. Langs Tannery can be seen on the opposite side of the river at Seedhill.