Natalie Don MSP is encouraging Renfrewshire residents to share their views on a draft national plan by the Scottish Government to end the need for people to use food banks. 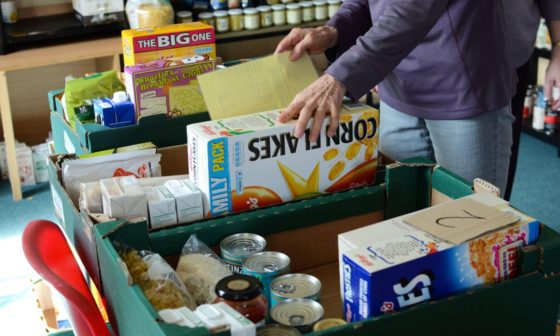 The MSP for Renfrewshire North and West is urging local people to input their ideas and opinions via a consultation about the plan, which is supported by food bank operators including the Trussell Trust and Independent Food Aid Network, to prevent food insecurity.

The Scottish Government’s proposals are weighted towards strengthening incomes through fair work and social security to ensure everyone can afford food that meets their needs and preferences, and supporting joined-up local responses seeking to make food banks the last port of call for people experiencing hardship by promoting emergency financial assistance and money advice first, alongside holistic support services.

Natalie Don MSP said: “The staff and volunteers at food banks in Renfrewshire and across Scotland provide a vital service, thanks to generous donations, to support many people in our communities experiencing poverty to the extent that they cannot afford to feed themselves or their families.

“Food banks, however, are not a long-term solution to poverty and I welcome the Scottish Government’s draft plan to end the need for food banks, which aligns with the SNP’s national mission to eradicate poverty.

“Rising energy and food prices, along with the UK Tory Government’s callous cut to Universal Credit, ending of the furlough scheme and failure to use wage-setting powers to ensure household incomes keep pace with the cost of living, is increasing financial hardship.

“Unfortunately, as 85 per cent of benefit spending in Scotland is still decided by out-of-touch Westminster politicians, the Scottish Government has limited powers and budget to mitigate the impacts for people being driven further into poverty and requiring to use food banks, but has set out these proposals to use existing powers to minimise food insecurity.

“I urge people in Renfrewshire – especially those who are or have been directly impacted by poverty – to take the opportunity to get involved and help shape this national plan as everyone should have the right to an adequate standard of living, including the ability to access food that meets dietary, social and cultural needs.”

For more information about the government’s plan and to participate in the consultation, go to consult.gov.scot/housing-and-social-justice/ending-the-need-for-food-banks before 25 January 2022.