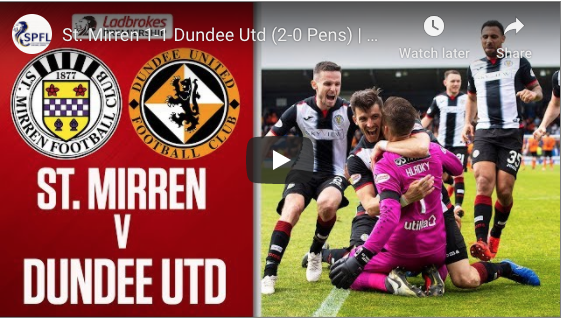 The 2019-20 campaign has been St Mirren’s second consecutive year in the top-flight of Scottish football, and when supporters look back and reflect on the last 12 months, there will be lots of good memories.

The Paisley-based club have particularly been strong at The Simple Digital Arena this season. They have lost just four of their 15 matches in the league on their home patch.

Here is a look at who have been the three standout players for manager Jim Goodwin in the 2019-20 season.

St Mirren keeper Vaclav Hladky has had 10 clean sheets in the Scottish Premier League this season. He has been inspirational between the sticks for his side. Only Allan McGregor, Fraser Forster and Mark Gillespie have recorded more clean sheets in the campaign.

Since signing for St Mirren on an 18-month deal from Slovan Liverac in January 2019, the Czech Republican has been one of the star goalkeepers in the SPL.

Hladky was linked with a move away from Paisley in the January transfer window; however, he remained with the club. He is expected to depart when his contract expires this summer where the queue is set to be long for his services.

The St Mirren shot stopper was the hero at the end of last season in the Buddies’ penalty shootout victory over Dundee United to secure SPL football.

Hladky has a big future ahead of him. He will be pushing for a spot at the UEFA 2020 European Championship next year. As of the 30th April, his nation are 150/1 with bookmakers in outright betting markets for the tournament. He has done enough in his 47 games for St Mirren to be remembered for a long time to come in Paisley.

Goals have been hard to come by for St Mirren this season. They have managed just 24 from 30 games in the Scottish Premiership. This is the lowest total by any team in the standings.

Their top goalscorer is Jonathan Obika who has managed 12 goals in all competitions. Without that contribution, it is fair to say St Mirren would be struggling to maintain their status in the top-flight of Scottish football.

Eight of Obika’s 12 goals have come in the league. The 29-year-old has led the line all season since arriving on a two-year-deal from Oxford United last summer. He has taken to the Scottish Premiership really quickly and is proving to be a great asset for the club.

The challenge Goodwin will have in the off-season is to find another striker who can support Obika and take some of the pressure off his shoulders. The former Tottenham youth player has already matched the best tally of his career. He needs just one more to beat the 12 goals he scored for Swindon Town in the 2015-16 campaign in League One.

In what is his second spell at St Mirren, captain Stephen McGinn has now racked up over 200 appearances for the club. He has proved once again this season that he is a fantastic leader.

McGinn has only featured 12 times this season as he picked up a knee injury in his side’s 1-0 victory over Hearts in December. When he has played, St Mirren have been much stronger in midfield with his services.

The 31-year-old has a lot of experience in the game. He has used it to good effect on the training field and pitch in competitive action to help the younger players in the squad. The fan favourite is now targeting 300 games for the club as his next milestone and he should get there within the next few years if he stays injury-free.

When McGinn was out of the team, it was clear that St Mirren missed their influential leader. He is not a prolific goalscorer from midfield; however, he does a great job of shielding the back four and ensuring there is some steal in the side.

The former Scotland under-21 midfielder is in talks with the club about signing a new deal and that is sure to be one of Goodwin’s priorities over the next few months. If McGinn does remain at the club, he will be hoping to give St Mirren fans something to cheer about, like they had during their Scottish Championship trophy parade in 2018.

With a host of young players breaking into the first team, the future will hopefully be bright for St Mirren. They will aim to continue their spell in the Scottish Premiership and chase their first piece of silverware since winning the 2013 Scottish League Cup at Hampden Park.