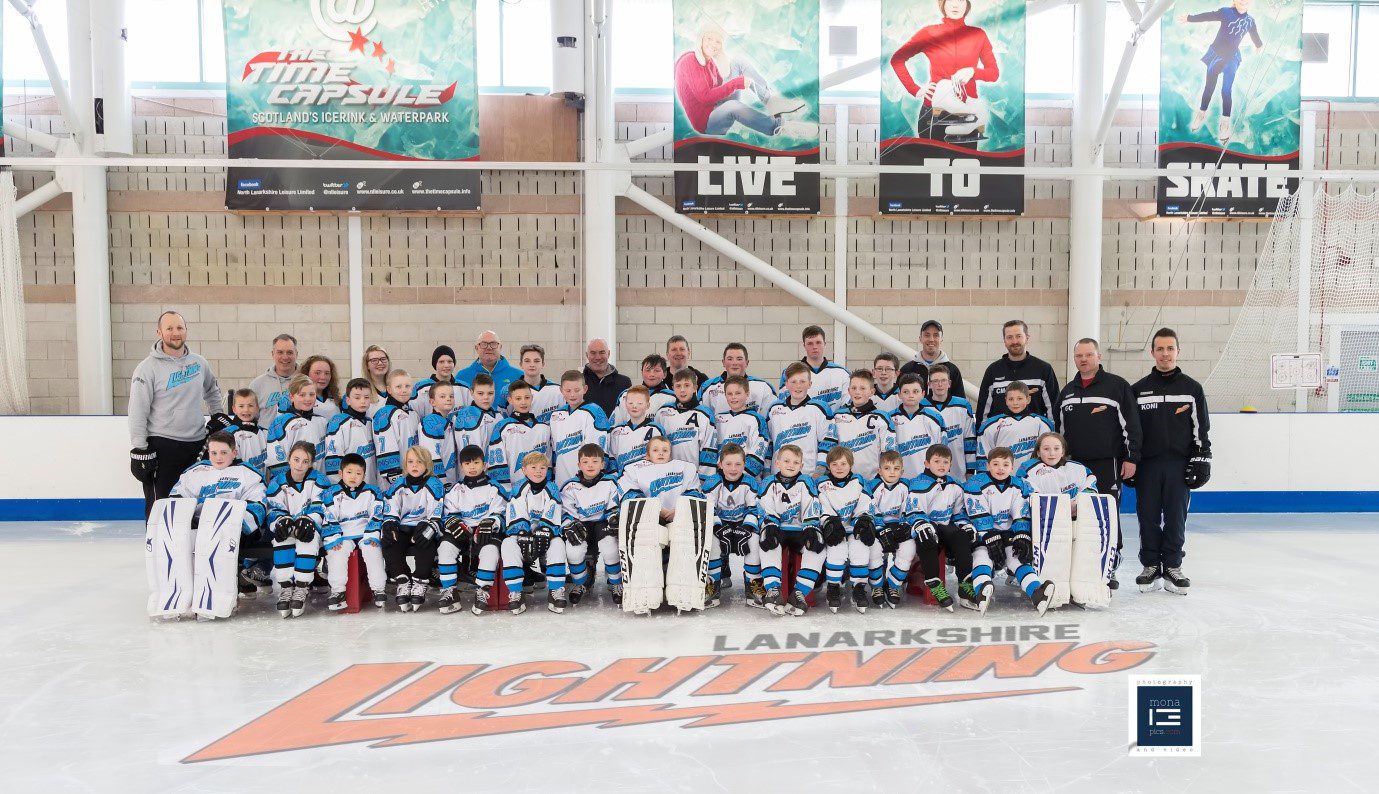 One of the newest junior ice hockey teams in Scotland is on the lookout for new players to join as it continues its rapid growth, from small beginnings, only two years ago.

Lanarkshire Lightning Junior Ice Hockey Club, who play out of the Time Capsule in Coatbridge, are inviting youngsters wanting to play the game, and kids who may already have begun the process, to become part of their ever increasing numbers as they expand into a third age limit team.

Coach Colin McMillan said, “When we started the club we quickly found we had enough players to form under 10 and under 12 squads, and these kids have done remarkably well in a very short space of time. It was tough at the start, as we were playing matches against more established sides, but as the kids have developed we’ve come on in leaps and bounds and we can see how far the kids have come in very little time indeed. We’re now beating some of those sides who were doing the same to us less than two years ago, and while it’s not all about winning, it’s very satisfying to be coaching youngsters who are just desperate to be out on the ice and take in everything you are trying to instil in them, not just how to play, but to learn about discipline, healthy eating, and establishing good habits which serve them well in day to day life, not just when they’re playing ice hockey.”

He went on,” We’ve already won a major tournament against other teams in the same age range and recently we took a team to Whitley Bay for a challenge match against the local juniors, so the kids are getting an opportunity to get out of their own environment and see other places, and enjoy new experiences, as they develop. We’ve got a very enthusiastic coaching team which includes three members of the Paisley Pirates senior ice hockey side, who recently won the Scottish Cup, so the coaching is based not just on drills and fitness, but on strategies learned from coaches who have played the game at a high level. We’ve got a great relationship with the Pirates and we’ve already played a bounce game on their ice at an interval during one of their games, as well as arranging for players to be mascots, and lead the team out every home fixture. It all adds to the positive experiences we’re trying to give the kids as they make their way in the sport and so far everything is going really well. We have a very active club committee which raises money and, at the same time, gives parents a chance to get to know each other, so there’s a good social element attached to the whole package for the whole family.”

“We’re now going to venture into the under 14 age group, a natural progression for the kids who have been playing at under 12 level, and as kids move up through the grades we are hoping to expand the age groups in line with those periodic developments. We’re looking for youngsters who are eligible for these age groups, as well as having in place a Learn To Play programme for rank beginners who want to start at the very beginning and progress on as they become more proficient. We’ve got spare kit available so that youngsters wanting to try the experience can take part without incurring major expense for their parents, and training times are arranged so that they can take part at all levels without interfering with school homework, for example.”

“We believe there’s a lot of boys AND girls around the West of Scotland who would like to play the game, but maybe don’t know there is a club in this part of the world which would love to give them that opportunity to play at a competitive level, in a sport that requires dedication, commitment to a healthy regime, and competition against youngsters of their own age.  We’re hoping to hear from them and their parents, who can contact us at Lanarkshire Lightning Junior Ice Hockey Club on Facebook, @LLightningIce on Twitter and  www.lanarkshirelightning.co.uk  for more information.”

Glasgow News? Daily Updates part of our network
Join race to get fit for Paisley 10k with special coaching