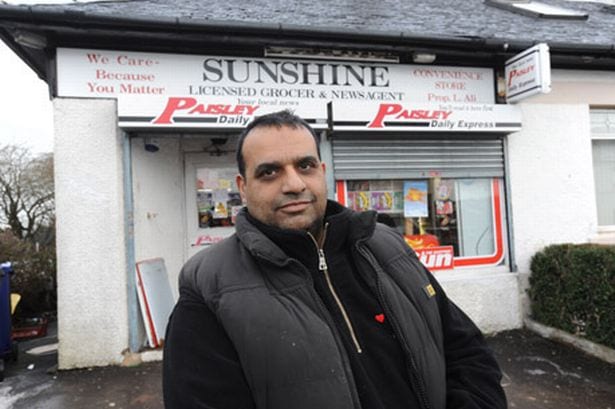 On Friday 15 June 2012 Paisley shopkeeper Javaid Ali was stabbed in his store on Green Road, Paisley, just outside Glasgow. He died two weeks later at the Royal Alexandra Hospital, with his wife and three sons by his side.

The 48-year-old, who had been running the Sunshine Licensed Grocer for three and a half years, had gone to work as normal that day. Just after 5pm, he dialled 999 to say he had been attacked.

On June 29, his family made the decision to switch off his life support and he died a short time later.

The shop was the hub of the community and the area would have been busy at the time of the attack.

Javaid’s killer could have escaped in a number of possible directions either on foot or in a vehicle – either way down Green Road, down Cardell Road or along a cycle track that runs behind the shop. The track takes you either in the direction of Lounsdale Road or Fulbar Road. It can be accessed via a grassy knoll near the store.

• Were you in the area on the day of the attack? If so, you need to contact police as you may have vital information which could help them.

• Were you a customer in the shop especially between 4:30pm and 5:10pm on the day of the attack? If so, you need to contact police as you may have vital information which could help them.

• Police still need to track down the following witnesses:

• A till transaction in the shop shows someone bought something for 35p just after 5pm and shortly before the attack. Was that person you? If so you need to come forward.

• A man was seen running from the area of the cycle path near the Lord Lounsdale pub which is about a quarter of a mile away. He is described as white, around 20 years old, 6ft tall, slim build, wearing grey jogging suit bottoms, with very short shaved hair.

• A woman was seen near the shop walking from the direction of the cycle track shortly after the attack. She is described as white, with dark hair in a pony-tail. She was wearing a dark jacket to her waist and either a dark coloured long pinny or t-shirt which came down under her jacket and was carrying shopping bags.
• Crimestoppers and the Association of Convenience Stores have teamed up to offer a £50,000 reward for information leading to the arrest and conviction of the person/people responsible for Javaid’s murder.