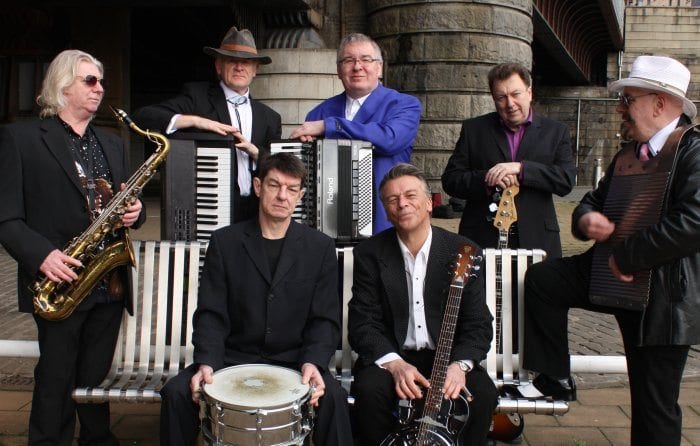 Domino Gumbo, Bringing a little Fais-Do-Do to ole’ Paisley
Every pot of gumbo starts with a roux – once you have that you can add just about anything to your pot of gumbo. Our roux is Fats Domino. His influence runs right though all the music we play. No-one has had a bigger influence on the music of South West Louisiana than Fats. This band plays all types of music from that wonderful place – R&B, Cajun, Zydeco, Swamp Pop – all mixed up together in a loving gumbo.

Pounding piano and rolling saxes? Present. Downhome squeezebox? Indeed. Flailing frottoir? (the over the shoulder rub-board). Scotland’s No 1 washboard man is on-board.
Domino Gumbo is a seven piece band, featuring guys who have paid their dues and more. From soul to country; from folk to blues – these guys have been playing American Roots music long before it was remotely popular.

The band was founded in Spring 2010 when three founder members spent over a month in New Orleans and the adjacent swamplands, watching and learning first-hand from the acknowledged masters. Returning home they hunted high and low for the right players to create the big sound. Since then, it has been non-stop rehearsal and recording.
They are now ‘ready, willing and able’ to rock’n’roll all night.

This music was originally played for dancing – and to this day that is still the best response. This is not music for the head; this is music for the FEET. The band is particularly keen to play venues where folks can shimmy, shake and cut some rug.

Some of the songs are self-written but most are drawn from the great Louisiana common repertoire. These are NOT ‘covers’. This is real folk music and folks in New Orleans would think it daft that anyone can own a song; irrespective of who wrote it or played it first. Domino Gumbo are drawing from, and adding to, that tradition.
Bring your dancing shoes……..

Find out more at www.hamisheshoose.co.uk