In 1882-83 season, St Mirren first won the Renfrewshire Challenge Cup as seen in the photograph. The team’s colours at this time were blue and red striped jerseys and stockings with white shorts. The team won this trophy again the next season after three replays. By 1890 St Mirren became founder members of the Scottish League.

After twenty-five minutes, Howieson (front row second from right) scored St Mirrens second goal. It was all over! Celtic had no reply! St Mirren had avenged their first ever Cup Final appearance in 1907-08 season, when they were beaten by Celtic.

Up to this point in the clubs history, apart from winning the local Renfrewshire cup, they had won the Victory Cup in 1919 in an extra time affair by whipping Hearts 3-0. In 1921 the Barcelona Cup, a magnificent trophy, won on a match tour in Spain, found its way back to Paisley.

St Mirren FC season 1958-59 – After defeating Celtic 4-0 in the Semi Final of the Scottish Cup at Hampden St Mirren met Aberdeen in the final.

The history was made by St Mirren’s Gerry Baker scoring ten of the goals – no one, last Century in Scotland, had ever scored so many goals in a major competition!

St Mirren FC 1987 – St Mirren won the Scottish Cup for only the third time, beating Dundee United 1-0 in the final, to bring back the coveted trophy.

An exited crowd of five thousand supporters had gathered outside the Town Hall to welcome the victorious team. Even the statues, trees and lampposts became perches for happy supporters! When Jimmy Bone saluted the crowd from the balcony of the Town Hall and shouted, ‘Paisley! Paisley!’, a great roar went up.

It was fitting that Bone, then Assistant Manager, should hold up the trophy, as he had led the team to another celebrated victory in 1980, when they won the Anglo-Scottish Cup.

On 16 August 2005 the Scottish Executive and Renfrewshire Council granted permission for the club to sell Love Street for supermarket development and allow the club to build a new stadium in Greenhill Road, Ferguslie Park, Paisley. The sale of their old ground financed the new stadium and cleared the financial debts of the club. In April 2007 it was announced that a deal had been struck with Tesco. Under this deal Tesco would pay for the construction of the new St Mirren Park, an 8,000 seat stadium. Work on the new ground started on 9 January 2008.

The last match to be played at Love Street, a goalless draw between St Mirren and Motherwell, took place before a sell-out crowd on 3 January 2009. The club officially moved into the new St Mirren Park on Wednesday 21 January 2009. The local authorities subsequently refused planning permission for a supermarket on the Love Street site. As of February 2012, it is planned to be used for housing which (2018) is currently half completed).

As Hearts finished in the top five of the SPL, they entered the League Cup in the third round. They made a convincing start, defeating Livingston in third round. A much tougher test awaited the Jambos in the shape of Dundee United in the quarter-finals, although they defeated the 2008/09 semi-finalists on penalty kicks. Hearts came up against Inverness CT in the semi-finals at Easter Road and were again victorious on penalties.

St Mirren finished 8th in the SPL and entered the League Cup in the second round. They too made a fantastic start, thrashing Ayr United. Hamilton were the Buddies’ opponents in the third round and Danny Lennon’s men sneaked through after a goal in stoppage time. The quarter-finals saw the Saints take a trip up to Pittodire to face Aberdeen, and after a 2–2 draw after extra time, the men from Paisley won on penalties. A trip to Hampden Park for the semi-finals saw St Mirren run out 3–2 winners against Celtic and set up a final against Hearts. St Mirren won the final 3-2 against Hearts. It was their first major trophy since the 1987 Scottish Cup victory.

In 2016 SMISA launched the campaign #BuyTheBuds to purchase a majority shareholding in St. Mirren Football club. Phase 1 consists of a joint bid to buy the the Club with former director Gordon Scott, which was successfully completed in summer 2016. Phase 2 will see the Trust buy out Gordon’s majority shareholding to allow St. Mirren to become a majority fan-owned football club. (At this present time Phase 2 is still underway)

Their last trophy was as the SPFL winners in season 2016/17 which seen a rampant team under the manager Jack Ross. You can watch the video below of the street celebrations after their open bus tour later in the week. 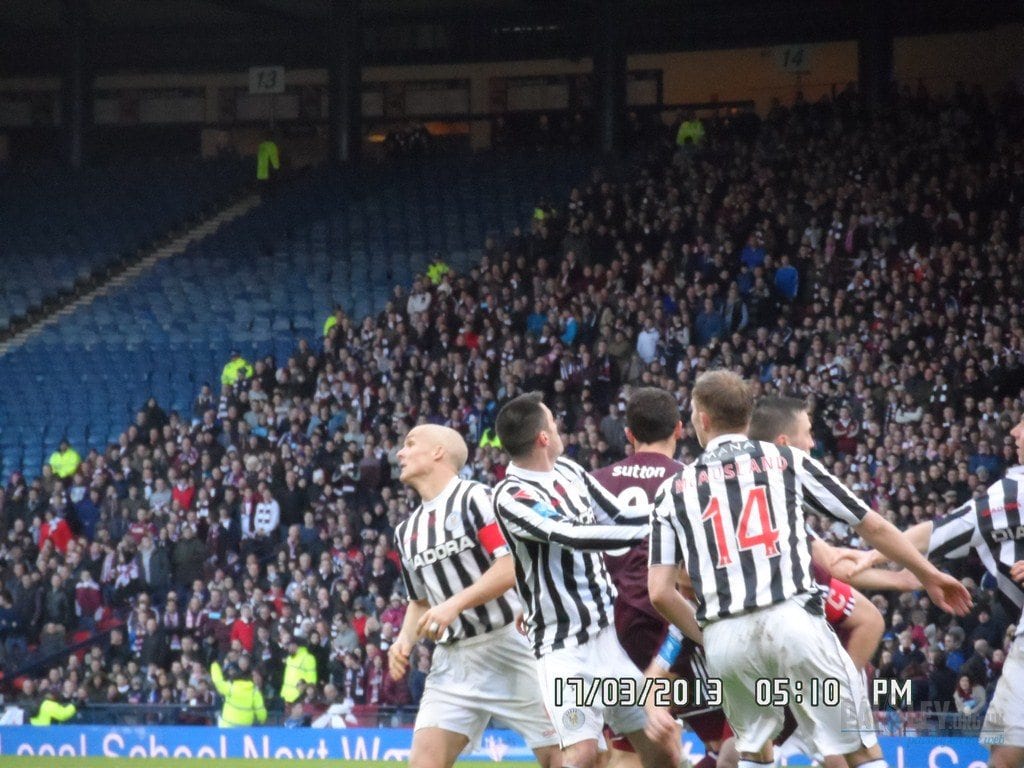 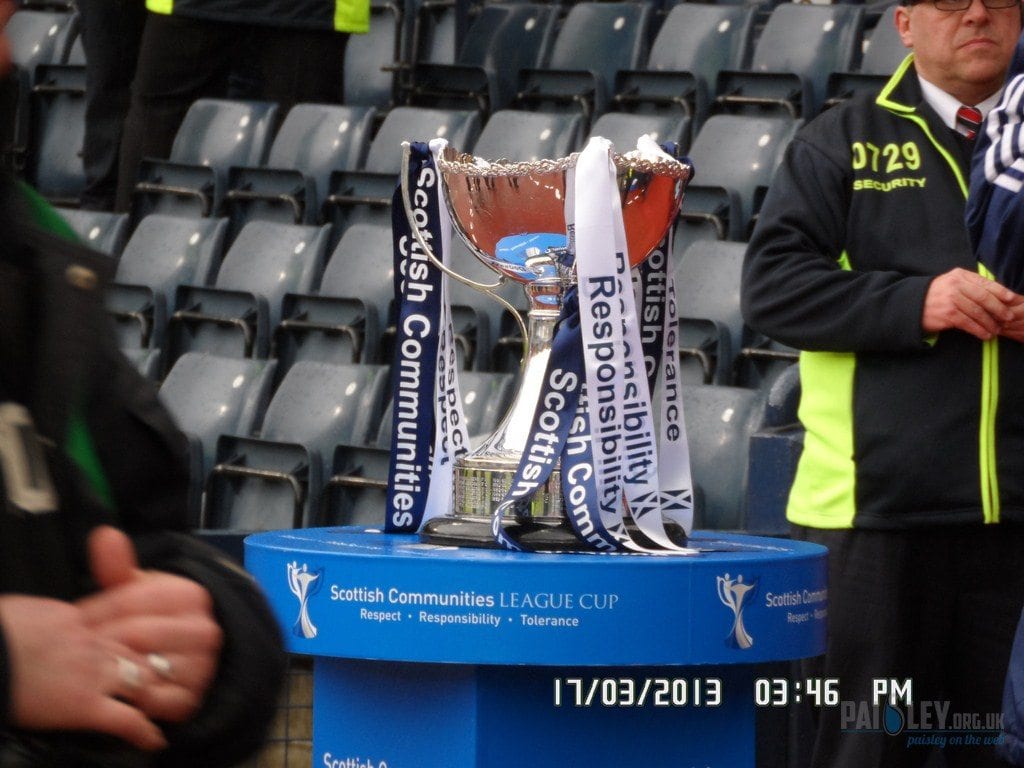 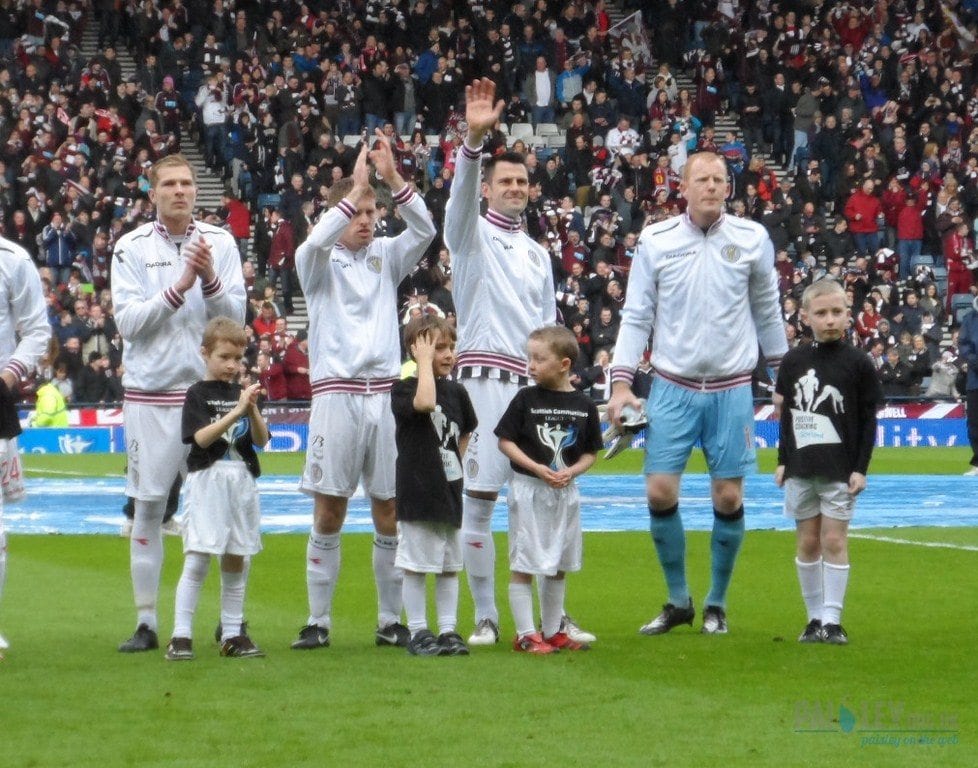 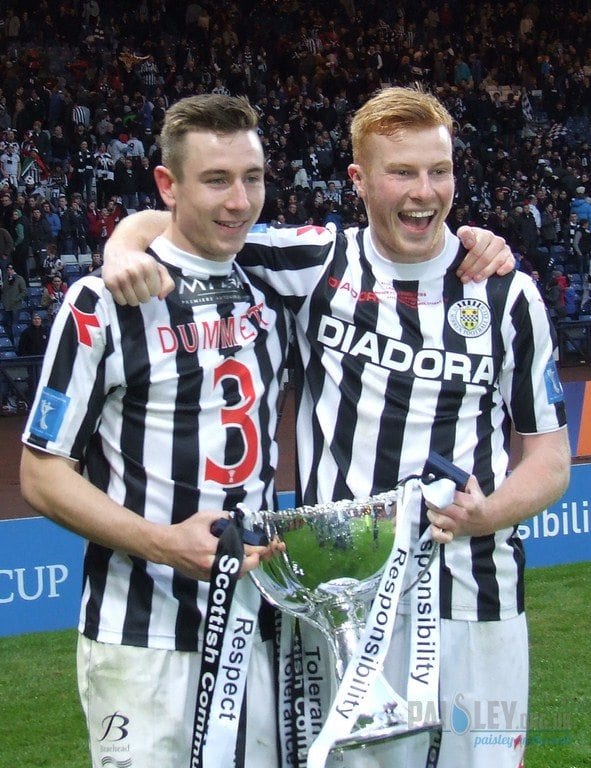 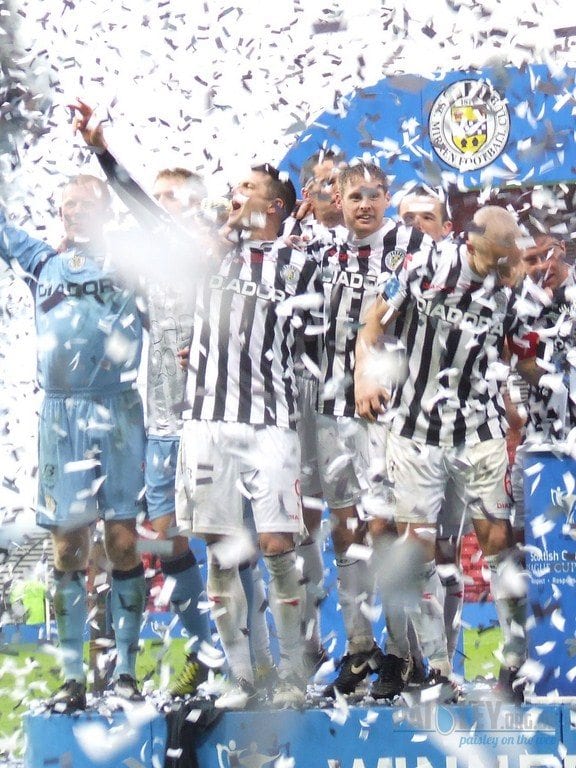 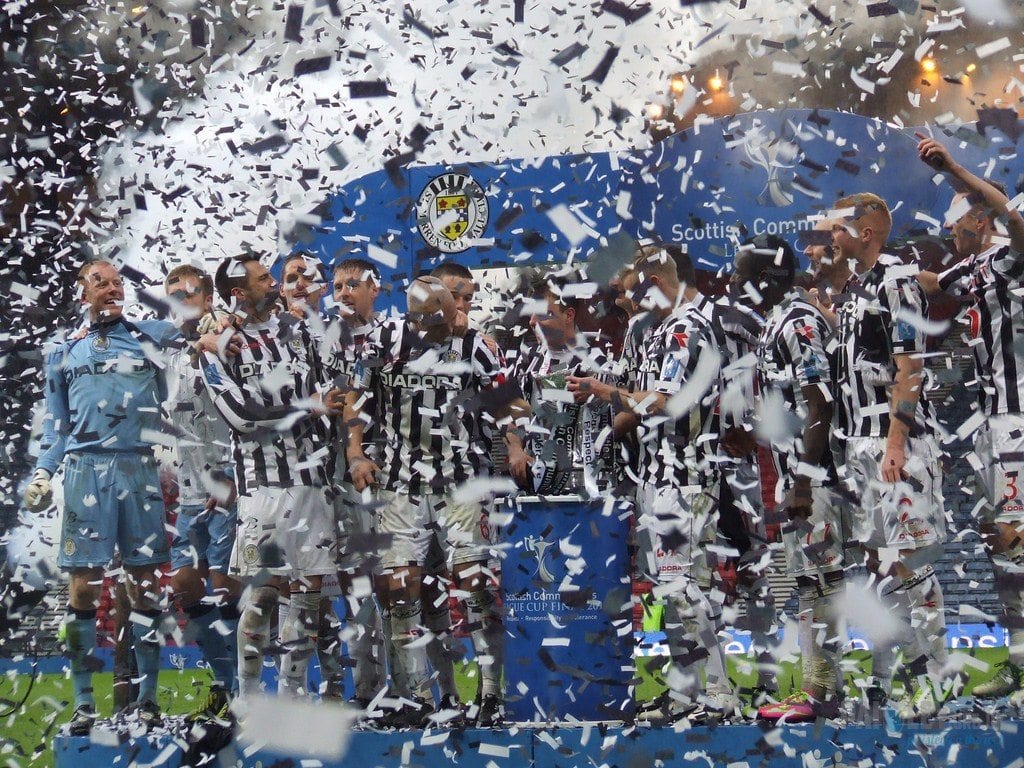 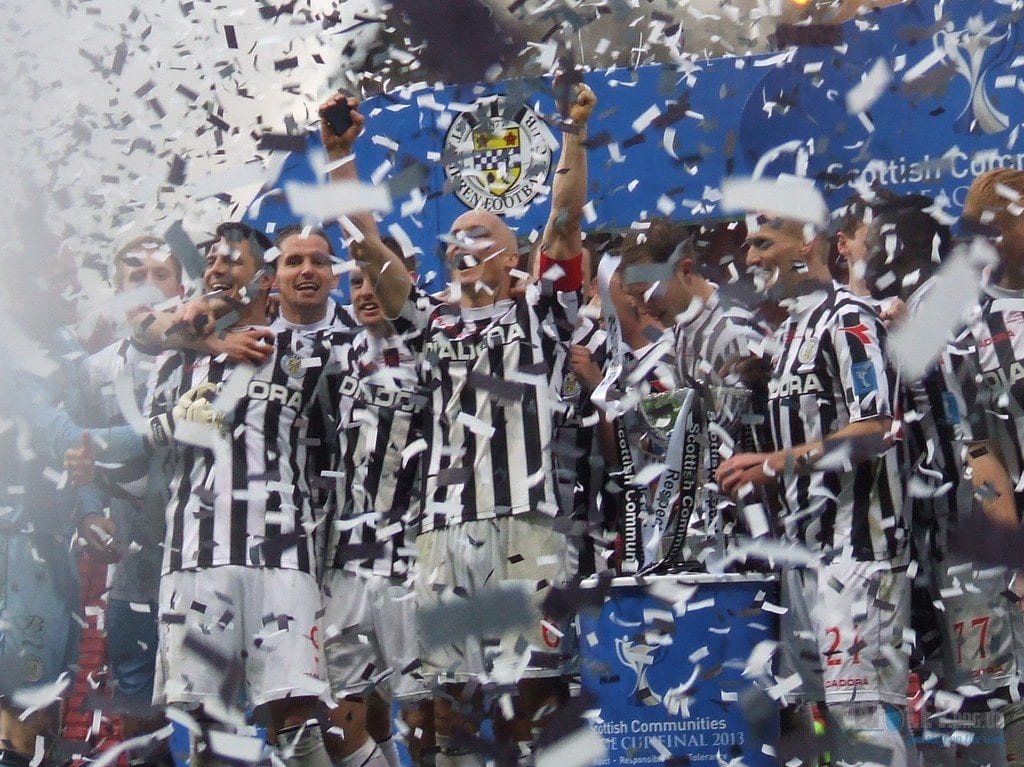 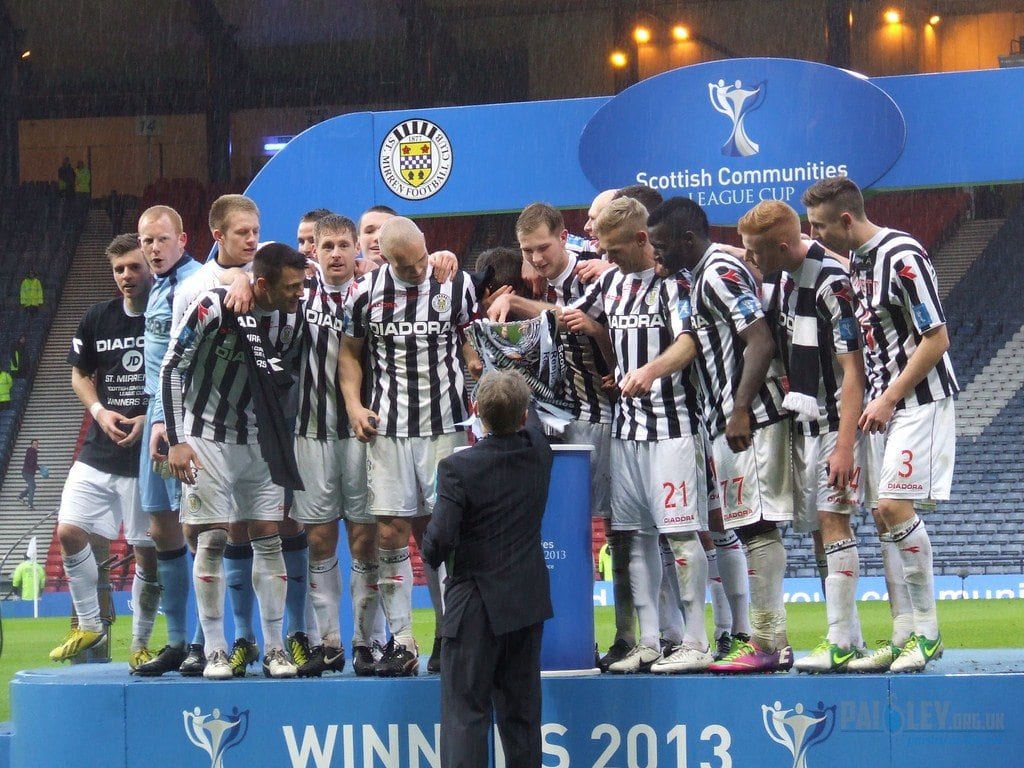 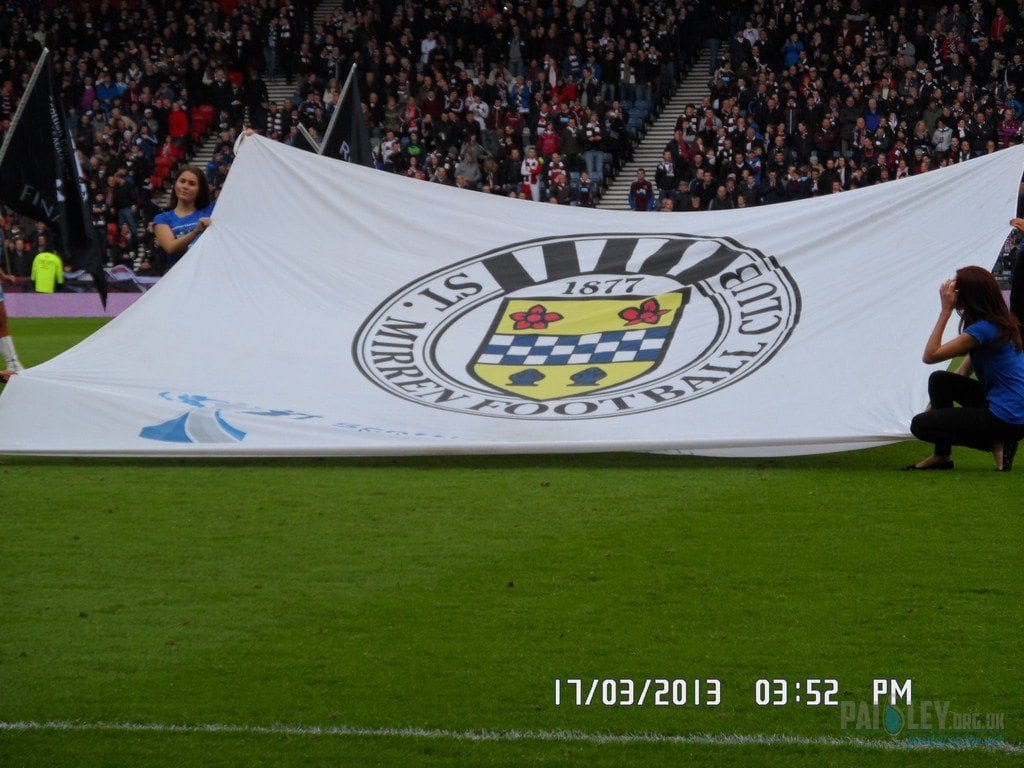