Miss Agnes Russell donated the Russell Institute building to the then Paisley Burgh on 19th March 1927. Miss Russell had the building constructed as a memorial to her two bachelor brothers, Robert and Thomas Russell (R. & T. Russell, Solicitors) who had died in 1923 and 1920.

The building was to be used as a clinic for the welfare of the children of the County of Renfrew and the Burgh of Paisley. The building was planned and designed by Paisley firm of architects, Abercrombie & Maitland. After the death of the senior partner, it became the particular responsibility of J. Steal Maitland, F.R.I.B.A., the junior partner of the firm. Miss Agnes Russell had placed no financial restrictions on the building, and as a befitted a monumental memorial as well as a functional building, wanted a design away from everyday architecture. Archibald McFadyen, a partner in R. &T. Russell who conducted her affairs, supported her in this view. Mr Maitland designed a building on vertical lines rather than the more horizontal lines, which had become the trend for economic reasons since the end of the First World War.

The site chosen for Russell Institute was a prominent one at the corner of New Street and Causeyside Street, although it was somewhat circumscribed for the purpose. It was then occupied by shops and the old tenement property, much of it in poor condition . Although the reluctance of some of the tenants to move e.g. Rag Merchant Bailie Brown – “Doon Brown” – caused frustrating delay work began about 1924.

The Russell Institute made architectural history having the first skeleton fabric of reinforced concrete in the West of Scotland. It was clad in Blaxter Freestone from the Borders, on a base of black Aberdeen granite. The windows arranged to give the maximum amount of natural light without distracting from the overall external appearance have quite imperishable bronze frames.

Mr Archibald Dawson, a sculptor of great promise was chosen to carry out the architect’s designs for a group and figures in bronze and other materials. The main doorway is surmounted by a large maternal figure in bronze with her brood flanked by two shields one the paisley Coat of Arms, the other the symbol of Aesculapius, God of Medicine with a serpent twisted round a staff. Both are in copper with heraldic enamel in brilliant colour. Above the large window is the massive bronze figure of a protective angel guarding the young generation in its arms with the motto A DEO SALUS “Health comes from God This wording carved in the stone work. Around the building at lower level are smaller figures in bronze each indicating a particular aspect of the work carried out in the building, e.g. Dentistry, Eye ailments.

Mr Dawson although with little practical experience fulfilled his work with skill but a career which could have led to fame was cut short by his early death possibly caused exposure to stone dust.

Italian marble was used internally to embellish the large and lofty hall which is three storey’s high and the main staircase. Small wrought-iron balconies adorned the first floor windows till about 1960. The building was completed in 1926-27, but the total cost of the project was never revealed.

The formal opening ceremony was performed by H.R.H. Princess Mary, the Princess Royal. On 19th March 1927 Princess Mary was presented with a golden key designed by the architect bearing copies of the heraldic symbols at the door on behalf of everyone responsible for carrying out work on the building.

Unfortunately Miss Russell who would have been made an honorary burgess of Paisley along with Mr W H Coats, in recognition of her magnificent gift to the Burgh, died in London in June 1926 before seeing her. 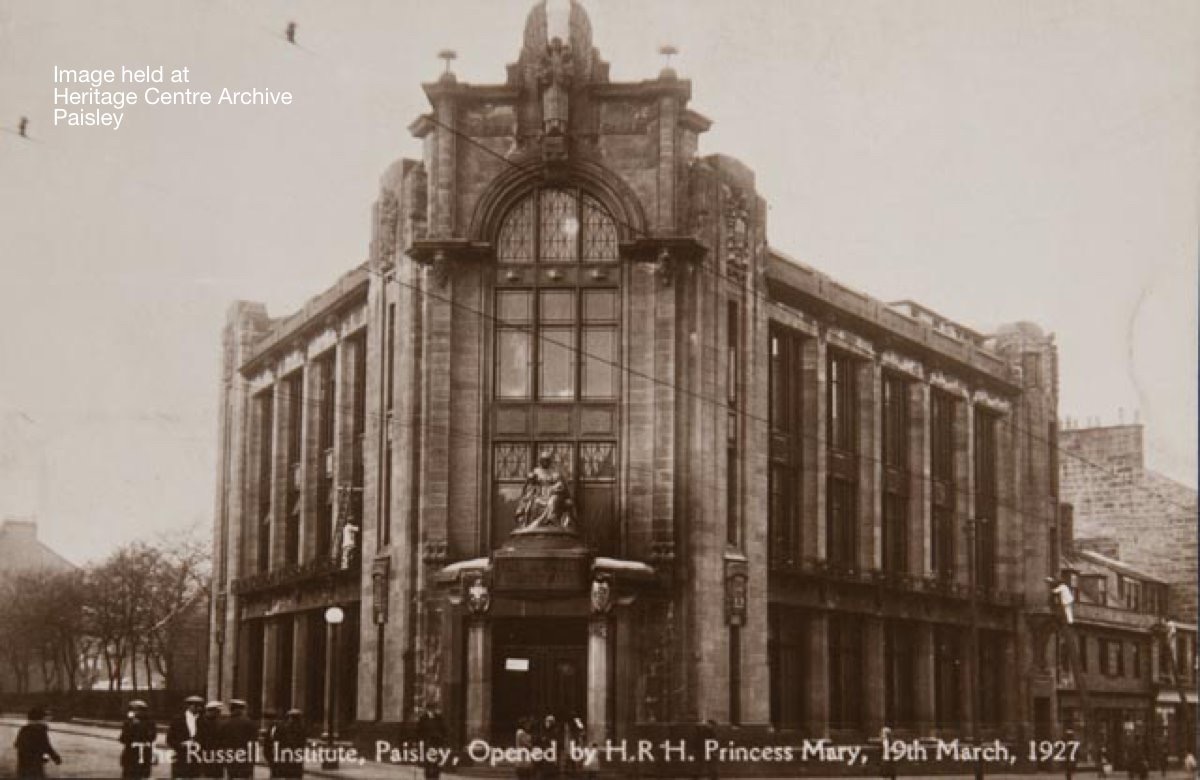