During the dark days of the 1940 “phoney war”, when rationing, gas masks and baffle walls were the order of the day, a new exiting winter sports stadium, the ice rink, first opened its doors to large crowds of people. East lane had never seen such crowds since the days when Abercorn Football Club played on the same piece of ground.

Paisley ice rink brought a fresh breath of air to the East End of the town. It was the most up to date arena in Great Britain and could boast an ice space of 20,000 sq feet, seating for 5,000 spectators, a first class restaurant, café, milk bar and a well-appointed shop. The streamlined, shell like building was large. Even the car park could provide 800 spaces. All the privately owned cars in Paisley at the time could have parked here! 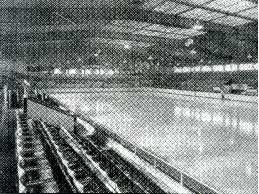 Soon, the stadium was filled with enthusiastic skaters, who appreciated the smooth surface of “continuously reconditioned ice”. The shop adjoining the foyer offered for sale the latest fashions in skating boots, but these were expensive to buy. White leather skating boots for ladies could cost as much as £8.00 nearly two weeks wages! Most people hired boots, for the ladies a dark brown leather and for gents “black hockey’s” were a must.

Skaters skimmed over the ice in anti clockwise circles. To deviate from this brought the wrath of the ice stewards down upon you. From a glass partioned box overlooking the ice, Alfred Munn, a dapper little gent, played the latest hit parade records. You could say he was paisleys first ever disk jockey! One favourite record was 2give me 5 minutes more”(of skating time if you please!)

How ever, to the uninitiated, skating had its dangers. Wee Paisley boys and girls were warned, “if you fall over face first, tuck in your fingers, otherwise a skate blade might cut them off.” Unfortunately this sometimes happened. Other skaters were considered “posh” to receive private skating lessons from national Skating Association teachers, in a roped off section of the ice. Or perhaps they were considered proficient enough to receive lessons from paisley’s own Scottish champion ice figure skater, Margaret Vernal. To be a member of the “skaters club” allowed you the treat of a plate of gammon sandwiches!

Another treat was to watch the Christmas ice pantomimes. These first began in 1946, just after the end of the war. Who could forget the sight of Cinderella’s Coach illuminated all round with electric bulbs and no sign of a supply flex! (The coach was a sledge drawn by Shetland ponnies ) Who could forget Humpty Dumpty and his antics on the slippery ice in the 1947 pantomime!

The main attraction of Paisley ice rink, to young and old, was the Paisley Pirates ice hockey team. The early teams were mainly Canadians. This brought a kind of North American culture and hero worship to Paisley. After each game, wee Paisley boys stood impatiently at the doors, clamouring for autographs. But it did not stop there. If you were lucky in the scramble, you might be given a broken hockey stick, quickly have it repaired with black electricians tape then play with it in the street and, with double ball bearing roller skates gliding over the tarmac, you became a Paisley Pirate”!

The “Paisley Pirates” were the epitome of the game in Scotland. In season 1953-4 they won the Autumn Cup, the Scottish Cup and the Canada Cup.

Their success brought them to the British League, but local supporters could ill afford to travel down South and gradually support waned. The junior team, the Wildcats, were wound up, followed by the Pirates. The Mohawks replaced them, but could not generate the enthusiasm of the Pirates. Paisley Buddies were delighted that the Pirates were relaunched in the 1990’s with the opening of the new ice rink and are living up to past glories.

In the late 1950’s, Paisley ice rink saw special exhibition tennis matches performed by Wimbledon stars Lew Hoad, Ken Rosewall, Pancho Segura and Rod Laver. Trouble was, the balls were hit so fast that they could barely be seen!

On 20th August 1965, a wee bit of history was made in Paisley. Cassius Clay, the world boxing champion heavyweight boxer, gave an exhibition bout to exited Scottish boxing fans. Paisley had never seen the likes since Benny Lynch fought a world title at Love Street in 1933!

Alas, in 1970, the old ice rink closed to ice sports, ostensibly for repairs. In November that year, only professional wrestling took place. Shortly after 1973 the building was closed, to be replaced by a supermarket.