By the middle of the 13th Century, the priory had gained enough power, wealth and influence, that it was raised to the position of monastery. The southern aisle, the western wall of the main body of the Abbey kirk and the St Mirin’s Chapel all date from the building work that was carried out at this time. Therefore, these are the oldest surviving parts of the Abbey that we see today.

But with the start of conflict between Scotland and England, in the shape of the Wars of Independence, the Abbey played its part the fighting. A skirmish between the Scots and English took place in woodland in what is now the Charleston area of the town. At this time, the Abbey was attacked by the English and partially destroyed by fire. This has usually been put down to the Abbey’s connections to the Stewarts, who at the time were supporting Robert the Bruce’s claim to the Scottish throne. Those parts of the Abbey that had been damaged were rebuilt and restored and the monastery continued to play an important part in Scottish politics, especially as the monastery continued to have strong connections to the Stewart dynasty.

This is on top of the Abbey’s connections to the Stewarts; it also has supposed connections to William Wallace. The legend goes that Wallace was at least partially educated by Paisley’s monks before being sent off to his uncles in Dundee. This connection between the Abbey and Wallace can be clearly seen today in the shape of the Wallace Window, which can be found at the end of the southern aisle.

During the 1550’s, disaster struck the Abbey. It was at this time that they Abbey’s original tower collapsed, which led to the destruction of much of the transepts, as well as the choir. As this was the time of the Reformation, it was decided not to rebuild what had been lost, and to seal off the nave and the St Mirin’s Chapel, which had been left unscathed by the collapse of the tower. The nave went on to be used as the Reformed parish church of Paisley, while the St Mirin’s Chapel was used as a private chapel by the Hamilton family. 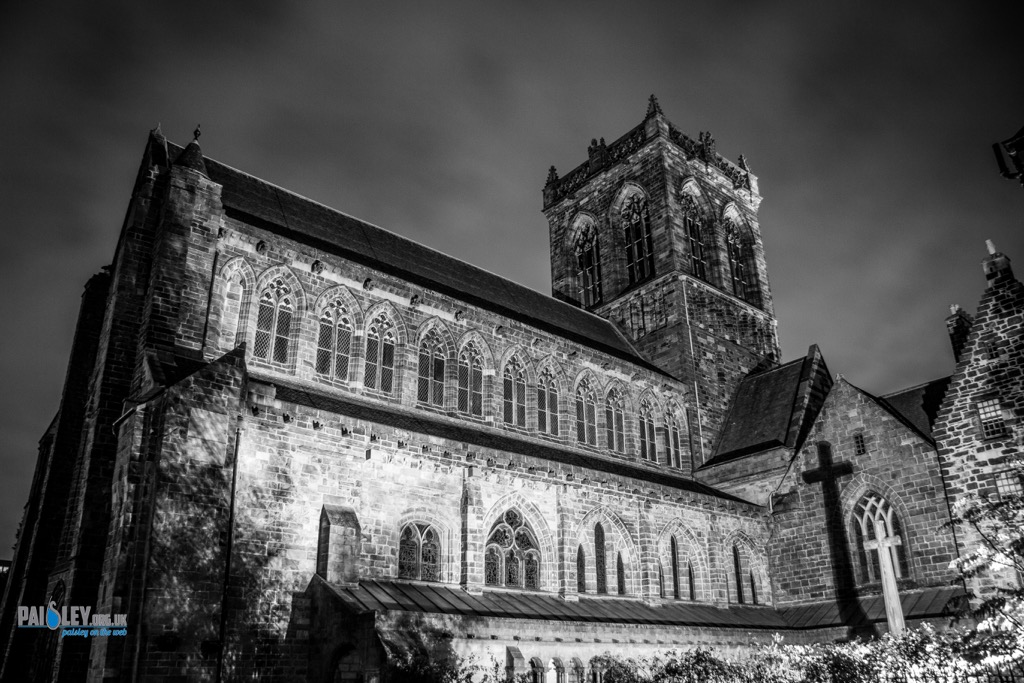 In the 300 years since the collapse of the tower, the choir had been used as a parish graveyard. This led to an increase in the ground level within that area of the church. It was decided that none of these graves would be disturbed and the restored Abbey was built around those who had been interred in what had once been a graveyard. During World War I, the rebuilding of the Abbey’s choir came to a halt, with the choir finally being completed during the interwar years.

The restoration work that has been carried out on the Abbey is continuing to this day. The clearest example of this can be seen with the plans to rebuild the west range of the cloisters. The original west range of the cloisters was torn down during the first phase of restoration work on the Abbey in the 19th Century. The rebuilt range will allow for a new gift shop, visitors cafe, as well as an area for interactive displays.

Many thanks to Claire Casey for this blog.