Expectations coming into this season weren’t high for Jim Goodwin and his St. Mirren team. Most bookmakers had the Saints down as being among the favorites for the drop before a ball was kicked, and Goodwin knew his job was to either prove them wrong or at least make a good show of doing so. Thus far, he hasn’t been able to persuade his players to show much in the way of fight. We’re ten games into the season, the Buddies are being kept off the bottom of the table by goal difference alone, and things already look bleak.

Things didn’t appear to be quite as bad after the first month of the season. Goodwin had seen his side take the expecting pasting from Rangers and pick up a loss away to St. Johnstone too, but a win away at Hamilton Academical followed by a battling draw at home to Ross County briefly had fans believing that a miracle was possible. The opening day win against Livingston didn’t appear to be such a fluke. That period of joy was short-lived. Five consecutive defeats followed. They’ve since been joined by a sixth. Goodwin only has two games left to play this month – one against Motherwell and one at home to Hamilton Academical. While it’s probably still too early in the season to say that either one of them is a “must-win,” failing to take a point from either of them would see a sense of doom and gloom creeping in at St. Mirren Park.

If Buddies fans were hoping that there might be some support coming via the transfer window, those hopes were cruelly dashed. St. Mirren got almost all of their business done much earlier in the summer, and the squad available to Goodwin now is the squad that he’ll be stuck with until Christmas at least. Presuming the likable manager is still at the club after that point, it’s not clear that there will be money to spend in January either. St. Mirren is a club that is and always will be run on a budget. Paying big money to bring people in isn’t an option. Selling unwanted players to raise capital might be, but that’s easier said than done. It’s been more than twelve months since anyone left St. Mirren in return for a transfer fee. Players come in for nothing, and they leave for nothing too. It might still be possible to bring in another free transfer here or there, but someone would probably have to leave beforehand in order to free up the wage budget. 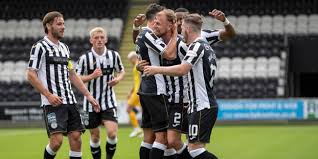 While the opening third of the team’s season has been disappointing for fans, players, board members, and the manager alike, nobody is yet suggesting that Jim Goodwin should lose his job. Changing a manager at this point would be like spending everything on a single spin of an online slots game with no reserve fund left in your pocket. There’s the chance that things might line up for you, as there always is when you’re playing slots on websites like Money Reels, but there’s also the chance that things could go very badly, too. Only steely, determined gamblers walk away with a profit from an online slots website, and even then, they’ll need to have had luck on their side. The owners of the Buddies aren’t gamblers, and there’s no obvious candidate to come in and replace Goodwin. Goodwin arguably isn’t performing any worse than most people expected he would, and the St. Mirren job probably wouldn’t interest a coach of better pedigree. Goodwin is stuck with his players, and the players are stuck with Goodwin.

We appreciate the tone of this article has been a little downcast so far, so can we find cause for optimism anywhere? Perhaps we should look toward the very same person we’ve spent most of this article discussing – Jim Goodwin. He’s been speaking to the press recently, and he’s still keeping a brave face on. He’s very clear that his side has to improve ahead of the two upcoming games, which he describes in his own words as “huge,” but he also believes that his players are up for the challenge. He’s the person who works with them in training every day, and he’s also the person who knows their capabilities best. On top of that, he believes he’s seen an improvement in performances recently. While the Scottish Premiership has been ‘resting,’ the side has been active in the Betfred Cup, where they’ve beaten Partick Thistle and fought to a draw with Queen of the South.

Both Partick Thistle and Queen of the South are lower league teams against whom victory – or at least avoiding defeat – would be expected, but winning is a habit. Not losing is a habit, too. A win against a smaller team can build the confidence of the players, as can avoiding defeat when things don’t go your way, as was the case in the Queen of the South game. Now, with Hamilton Academical coming up fast, that recent experience might have given the Buddies the edge. The Accies are struggling just as badly as St. Mirren is. A victory against them would lift St. Mirren away from trouble and into the clear. Motherwell are only faring better by the small matter of a single point in the league table. They, too, are beatable. Defeat against both sides in the upcoming games would be disastrous, but there’s no need to dwell on that possibility yet. If the Buddies win both games, they’ll have picked up six valuable points at the expense of two of their closest rivals in the fight against relegation. That might count for more than anybody yet realizes at the end of the season.

This is a nerve-wracking time to be a fan of St. Mirren, but having said that, we can’t remember any time in the past five years that doesn’t meet that description. We want to re-emphasize that relegation isn’t a certainty if the team loses, but the job of achieving survival will certainly become that much harder. Let’s hope for positive things and put our faith in Jim Goodwin. If St. Mirren win once, they can win twice, and if they win twice, the league table suddenly looks very different indeed.

Glasgow News? Daily Updates part of our network
How to Choose Between Long-Term and Short-Term Loans

What Unique Purpose do Rescue Dogs serve
Scroll to top