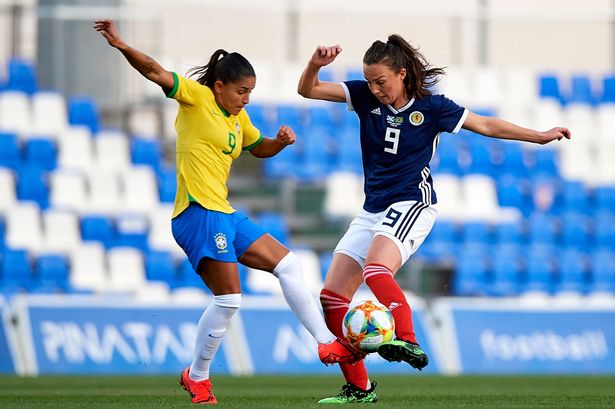 MP CALLS FOR COMMONS TO CONGRATULATE SCOTLAND’S WOMEN’S SIDE

Gavin Newlands, SNP MP for Paisley and Renfrewshire North and Chair of the APPG for Scottish Sport, has submitted an Early Day Motion to the House of Commons which calls on MPs to add their congratulations to the Scottish national women’s football team on their outstanding and unprecedented victory over Brazil on Monday night. A win which marks the first time that any Scottish national senior team has defeated that iconic footballing nation.

The motion also calls for Members of Parliament to wish the team luck as they look forward to their World Cup campaign with the opening  game against England on the 9th of June. The victory comes just a few short weeks after Manager Shelley Kerr presented to the All Party Parliamentary Group for Scottish Sport on the success of women’s football and on what steps must be taken to grow the game.

After lodging the motion, Newlands commented:

“Everyone in Scotland should be proud of the outstanding success of our women’s team over one of the world’s greatest footballing nations- currently in the world’s top ten.

“The success of the women’s side will continue to encourage young women and girls to play football and strive to reach the highest level. As politicians, we have a duty to champion our national team and to ensure that their successes result in the continued growth of the women’s game.”

The full motion reads: ‘That this house congratulates the Scottish National Women’s Football team on their unprecedented win over Brazil; acknowledges that this is the first time that a Scottish senior national side has defeated that iconic footballing nation; commends both Head Coach Shelley Kerr on her outstanding coaching ability, and Captain Rachel Corsie on her incredible team leadership, the combination of which has led to an already capable group of players being developed into a world-beating side; is not surprised by this success following the deeply impressive recent visit by Shelley to the APPG for Scottish Sport; hopes that the team are sent off in rousing fashion with a full house at Hampden Park when they play their final warm-up match against Jamaica on the 28th of May; and wishes the team the best of luck in their upcoming World Cup Campaign, particularly in their opening game on the 9th of June against England.’