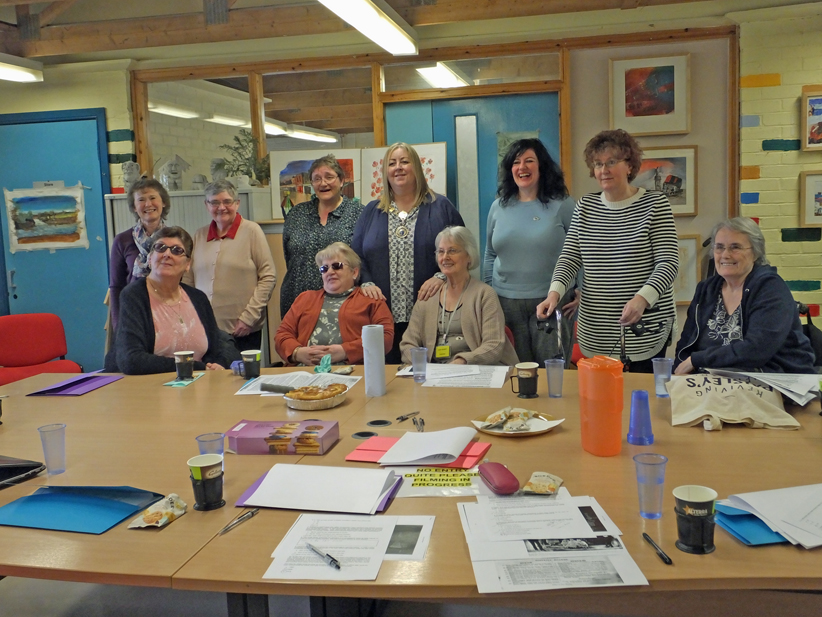 A heritage project is examining how Renfrewshire women have been making their mark on history for almost 150 years. Members of Paisley’s Disability Resource Centre have been working with social historian Lil Brookes to discover the contributions made by remarkable local women from the Victorian and Edwardian eras.

Those whose achievements have come under the spotlight  in ‘The Ladies, A,B & C’ project, include Jane Arthur, the sister-in-law of Thomas Coats, from the famous Paisley manufacturing family.

Lil, who is leading the workshops supported by Renfrewshire Council’s Culture, Heritage and Events fund, said:  “We started in the week of the 100th anniversary of women getting the vote, which seemed very fitting when we were finding out more about these remarkable, strong women. Our first one looked at what women’s positions were in Victorian times and what education was available to them, which was a great icebreaker.” Jane Arthur was the first Scottish woman elected to a school board in 1873. The feminist and activist also later became vice-president of the Paisley Ladies Sanitary Association, which promoted public baths.

Lil said: “One of our workshops was led on a cartoon from the Paisley Heritage Centre archive by a Scots artist James Elder Christie called ‘The School Boat Race . The ship Jane Arthur is sitting in is called ‘The not so weak vessel’, which all about the school board elections and a woman standing.

“It was the first time women were allowed to take some kind of role in public office.  There were nine places up for grabs on the board and Jane Arthur, who was clearly very popular, was overwhelmingly voted in and got around 6,500 votes. The next man down only got around 3,500.”

Other exceptional women explored in the project include rent activist Mary Barbour from Kilbarchan, who had a statue unveiled in her honour in Govan on International Woman’s Day.

She was a key player in fighting rent increases imposed by Glasgow landlords during World War One.

It also featured three of the Mrs Coats from Paisley’s other famous textiles manufacturing family, and their stories all contain themes still relevant to women today like equality in the workplace, education, healthcare, and housing.

Lil added: “We are all just ordinary women and it’s been great to bring the stories of these women who went before us to life. Often their stories went largely unreported and compared to the men of the era, most of their names are still largely unknown.”

The group’s field trips have included a visit to the National Library of Scotland and to Paisley Museum and Renfrewshire Provost Lorraine Cameron dropped into one of the workshops this week to hear the remarkable stories.

She said: “It’s fascinating to hear about some of the amazing women Renfrewshire has produced and their strength and achievements are still inspiring today.”

The legacy of the project will be a short film on the women whose stories were featured.

The CHE Fund was set up in 2015 as a way of getting people involved in culture and unlocking Renfrewshire’s creative potential as part of Paisley’s bid to win the UK City of Culture 2021 title.

For more information on the CHE Fund which is still accepting applications, please go to www.paisley2021.co.uk

Safety first is the goal for Renfrewshire pupils
Scroll to top