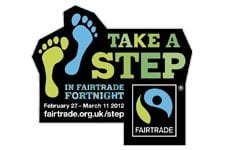 People of all ages across Renfrewshire are being urged to back the Fairtrade Foundation’s ‘Take a Step campaign’ by helping poverty stricken farmers and workers around the world take their own steps towards a brighter future.

The Renfrewshire Fairtrade Steering Group is backing the challenge and urging individuals and groups in the area to take steps towards Fairtrade, no matter how big or small.

A step is any action that supports Fairtrade – taking a first step could be choosing to buy a Fairtrade coffee on the way to work, or making sure the weekly shopping basket contains one or two more Fairtrade products like Fairtrade tea or bananas, or encouraging friends and family to switch to Fairtrade

Councillor Brian Lawson, chair of the steering group, has already written to all the schools in the area asking pupils and staff to take part by Pledging a Step and is urging other groups, including churches and youth groups to join in.

All the step pledges made in Renfrewshire will then be gathered together and sent off to the Fairtrade Foundation to help them achieve their target.

Councillor Lawson said: “The support for Fairtrade in Renfrewshire is constantly growing, and as a result this year’s Fairtrade Fortnight looks set to encourage even more people to step into Fairtrade.  In particular we really want Renfrewshire to back the Fairtrade Foundation’s challenge of reaching 1.5 million steps this year.”

A series of Fairtrade Fortnight events have also been lined up throughout Renfrewshire for people of all ages to get involved in.

The steps that are being taken around Renfrewshire range from coffee mornings and afternoon teas, to a Fairtrade film night and a Fairtrade Step Trail around Bridge of Weir and Houston.

As part of the campaign activities, a Fairtrade producer will visit Renfrew Town Hall to talk to Fairtrade supporters. Mrunal Lahankar, from the Chetna Organic Farmers Association (COFA), India, will be telling groups about how Fairtrade benefits the community and plays a vital role in reducing poverty and creating sustainable development. The Producers
Scroll to top