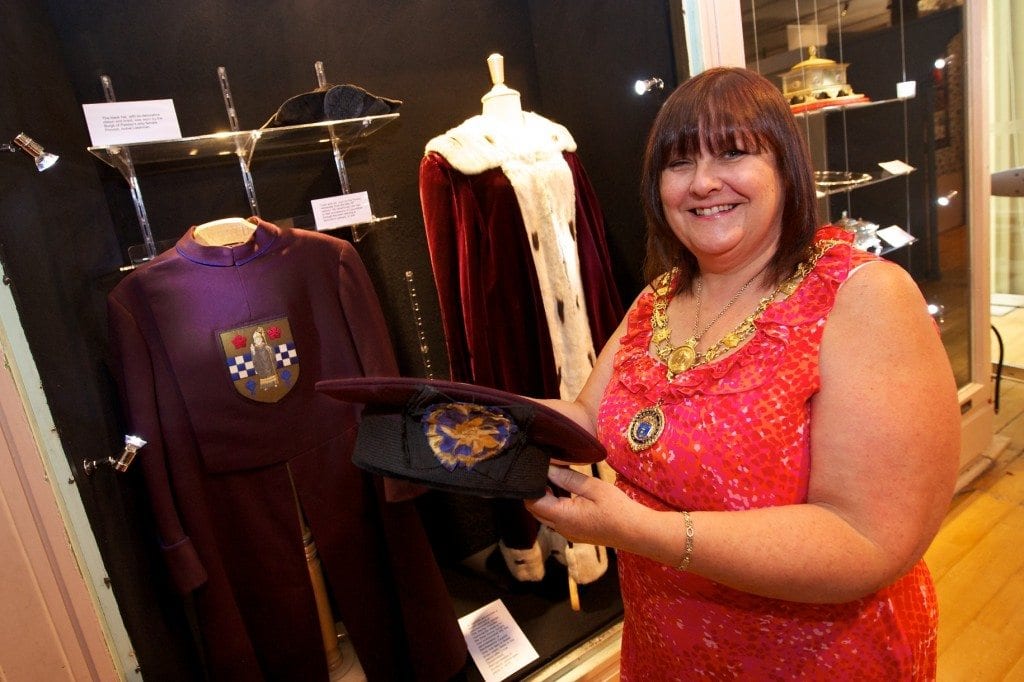 A collection of civic regalia worn and used by Renfrewshire’s Provosts past and present is now on display at Paisley Museum.
The display coincides with the 100th anniversary of the Provost’s chain. The chain, worn by current Provost of Renfrewshire Celia Lawson while on civic duty, was originally presented to the council on the 22 June 1911, the date of the Coronation of King George V. Formerly belonging to the Burgh of Johnstone, it is used with the addition of a new medallion to reflect the current Renfrewshire Council.

The exhibition features a variety of civic regalia and includes some of the badges of office worn by previous Provosts. Other items include the ceremonial spade used by a former provost when marking the creation of Robertson Park in Renfrew along with the trowel used to lay the foundation stone of the Paisley municipal buildings in 1899.
Some of the clothing worn on ceremonial duties is also on display including the robe worn by Provosts to lead a procession of councillors through the town. These processions would also have been led by a Paisley Halberdier whose tunic and hat are also on display.

Provost Lawson, who recently paid a visit to the exhibition, said: “This collection really reflects Renfrewshire’s proud heritage and it is very interesting for me to learn more about the role of those who served before me.
“As Provost a big part of my role is to represent the community and maintain its traditions.
“The exhibition has already been a success with many visitors, both local and tourists, viewing these fascinating exhibits.”
The collection of civic regalia is one of many currently on display in Paisley Museum that reflects Renfrewshire’s past.
The exhibition is free to attend and is open to the public from 11am – 4pm Tuesdays to Saturdays and 2pm – 5pm Sundays.