JOBS could be lost and shops put out of business unless Renfrewshire Council remove barriers they have erected along a 140-metre stretch of pavement in Glasgow Road, Paisley.

The social distancing barriers are part of a £105,000 Spaces For People project that is meant to create an extra-wide pathway for pedestrians and cyclists – even though three weeks after the barriers were put up, cycling was BANNED from the newly-created route. 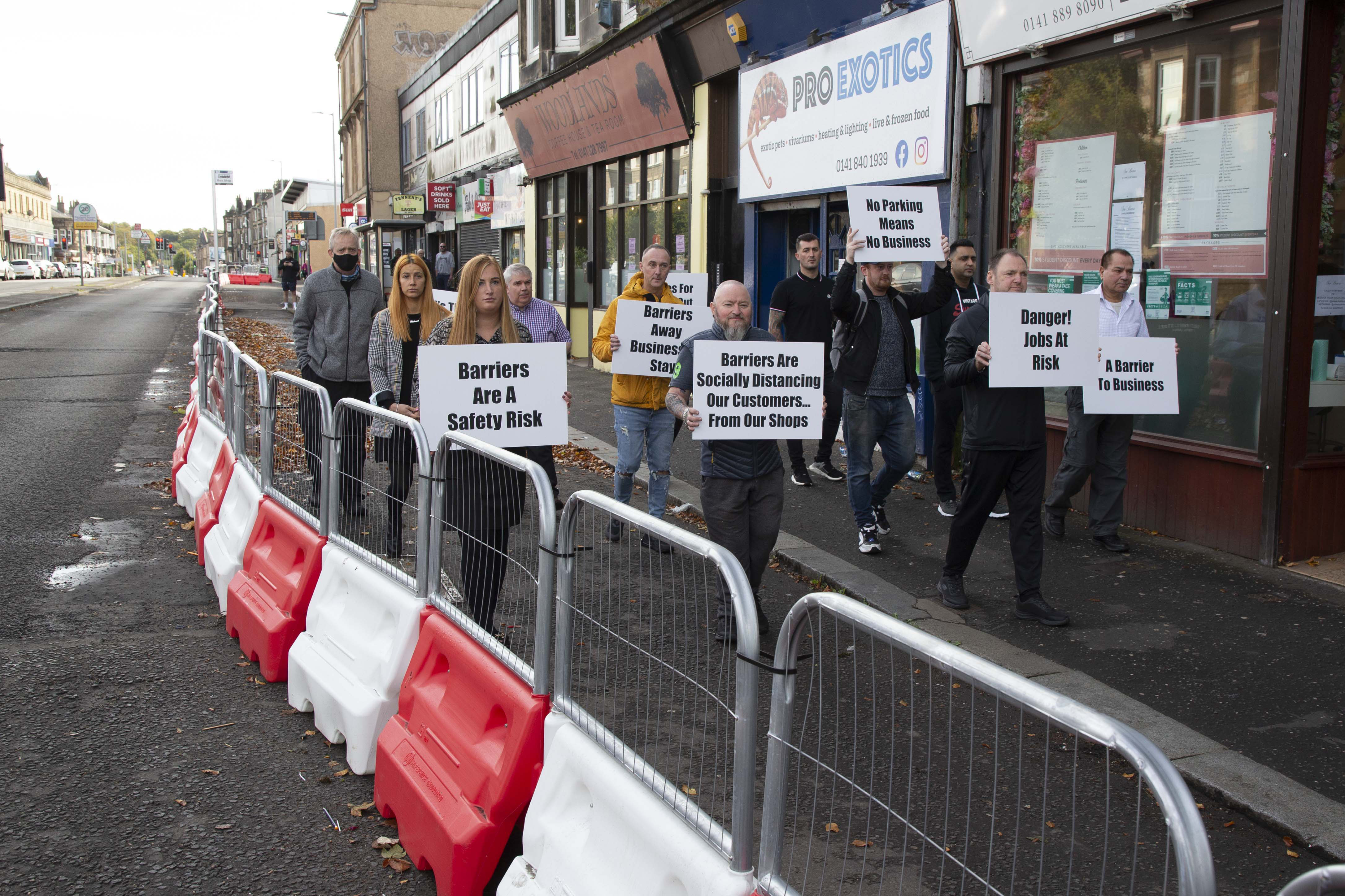 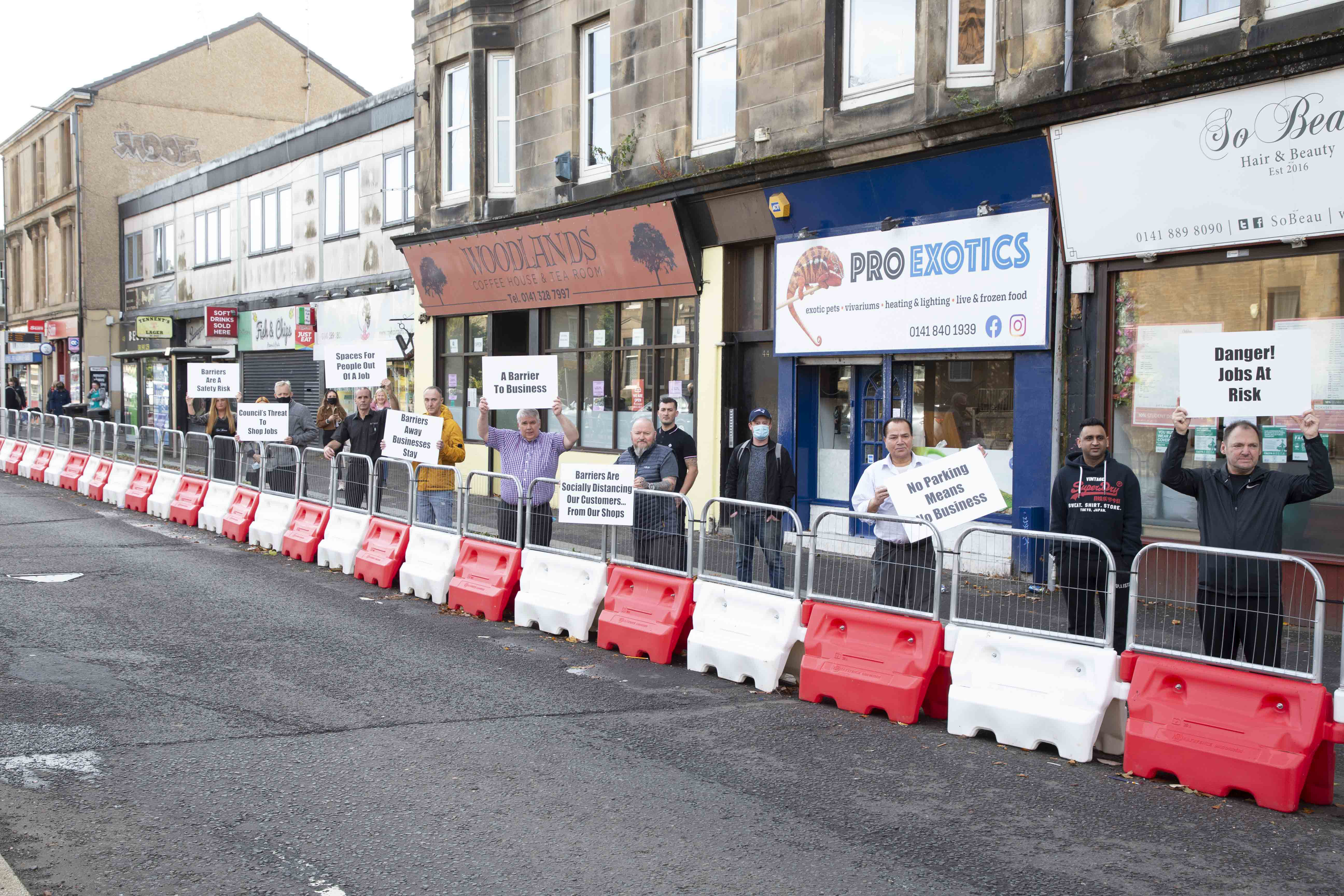 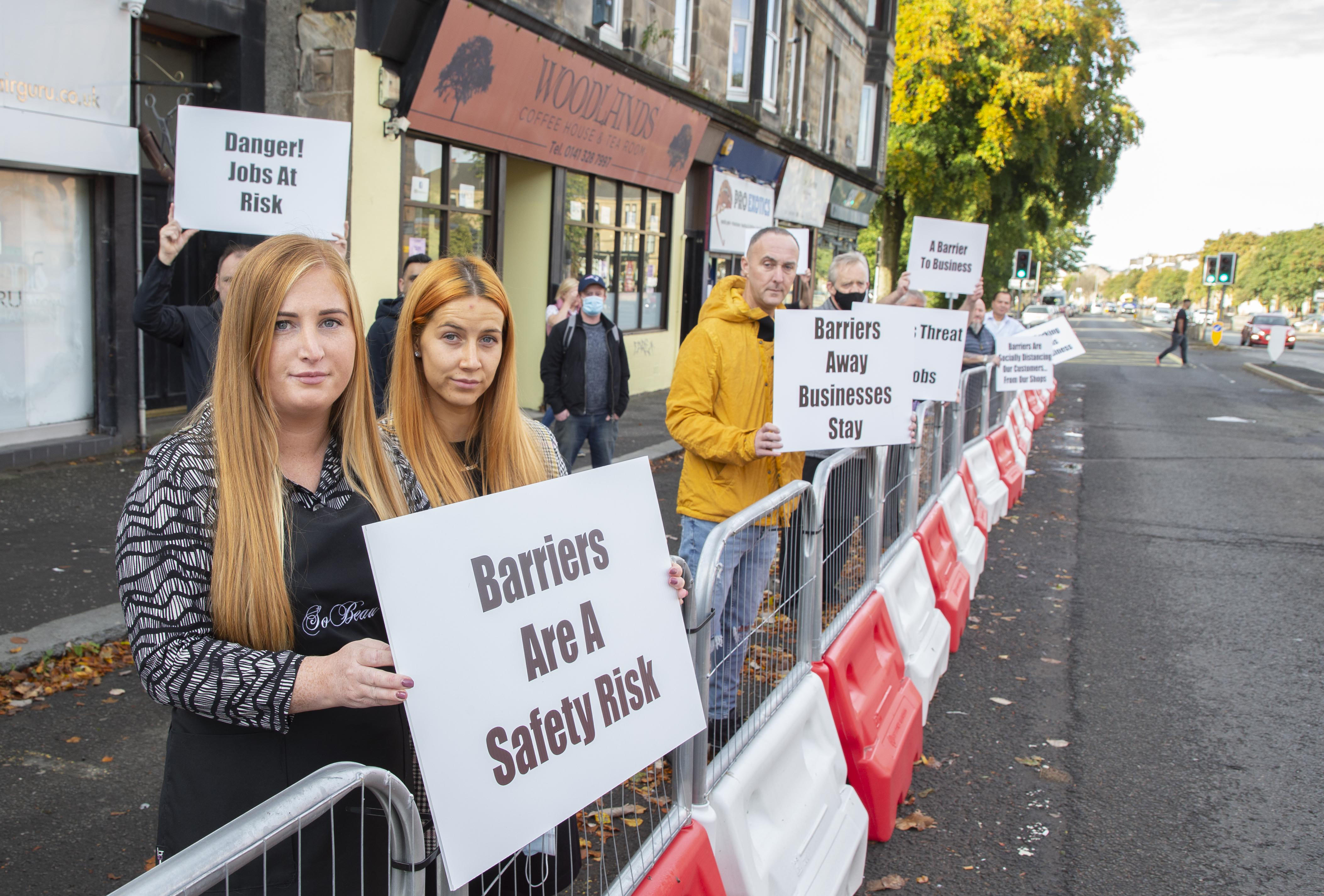 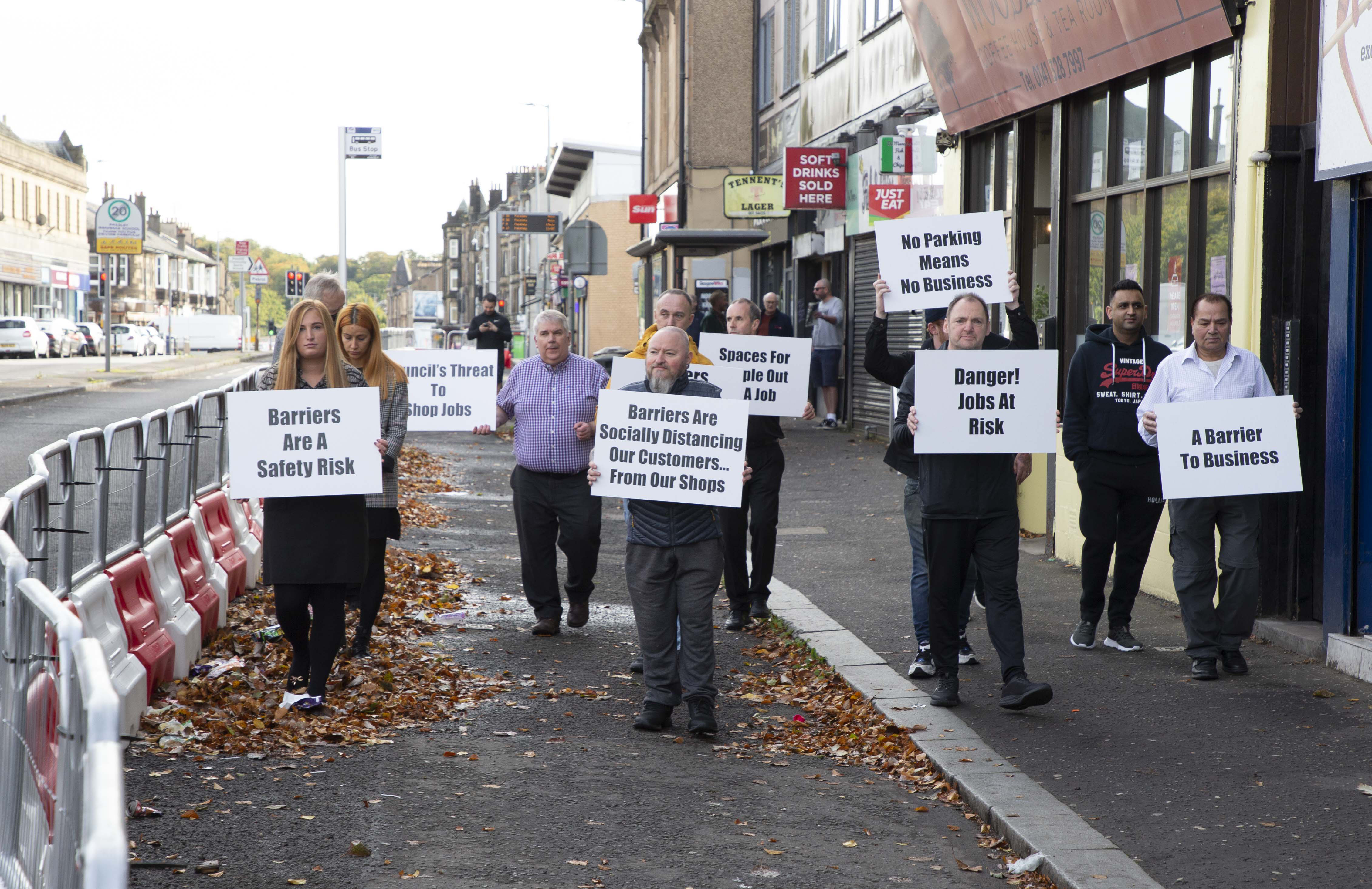 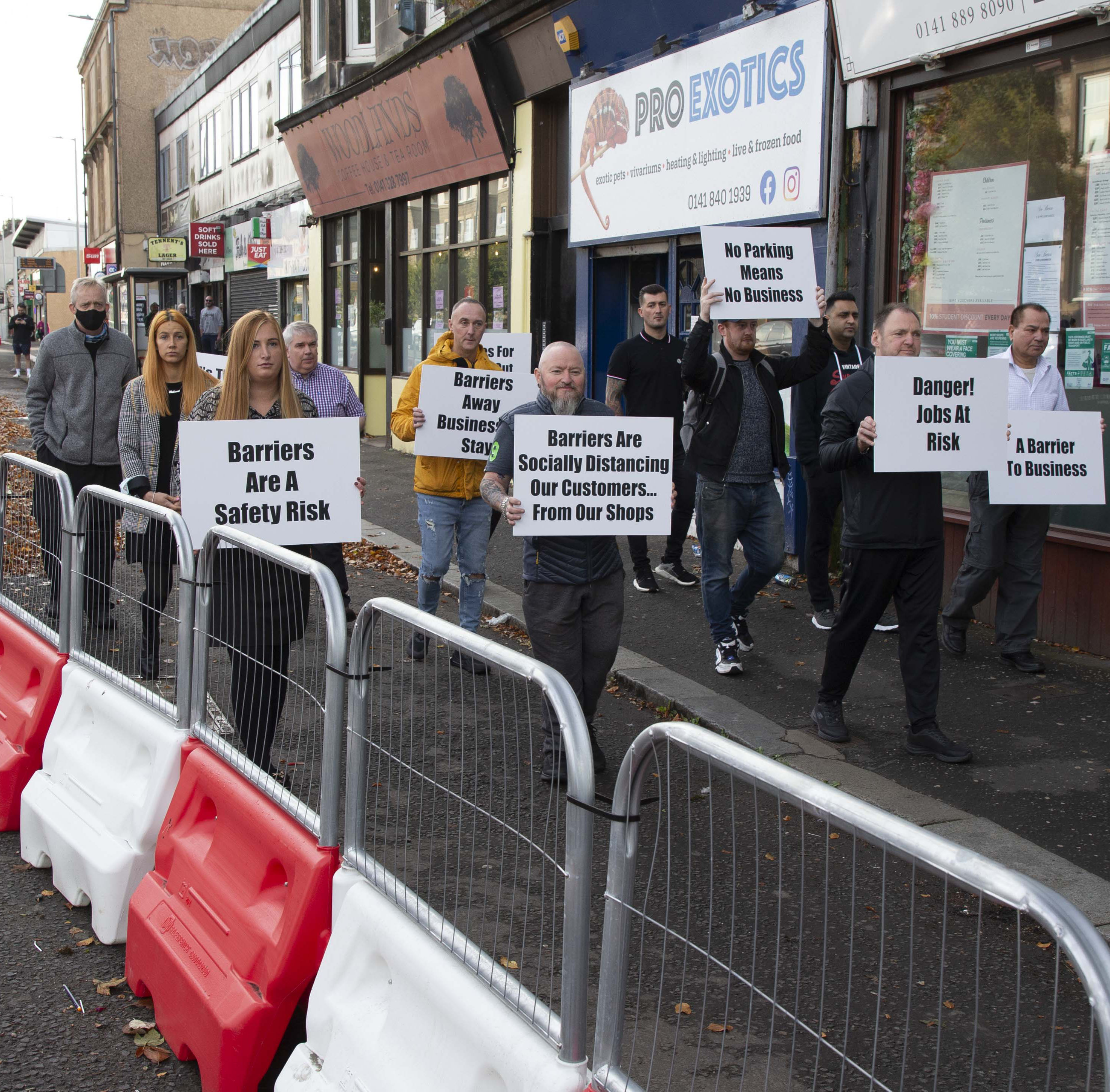 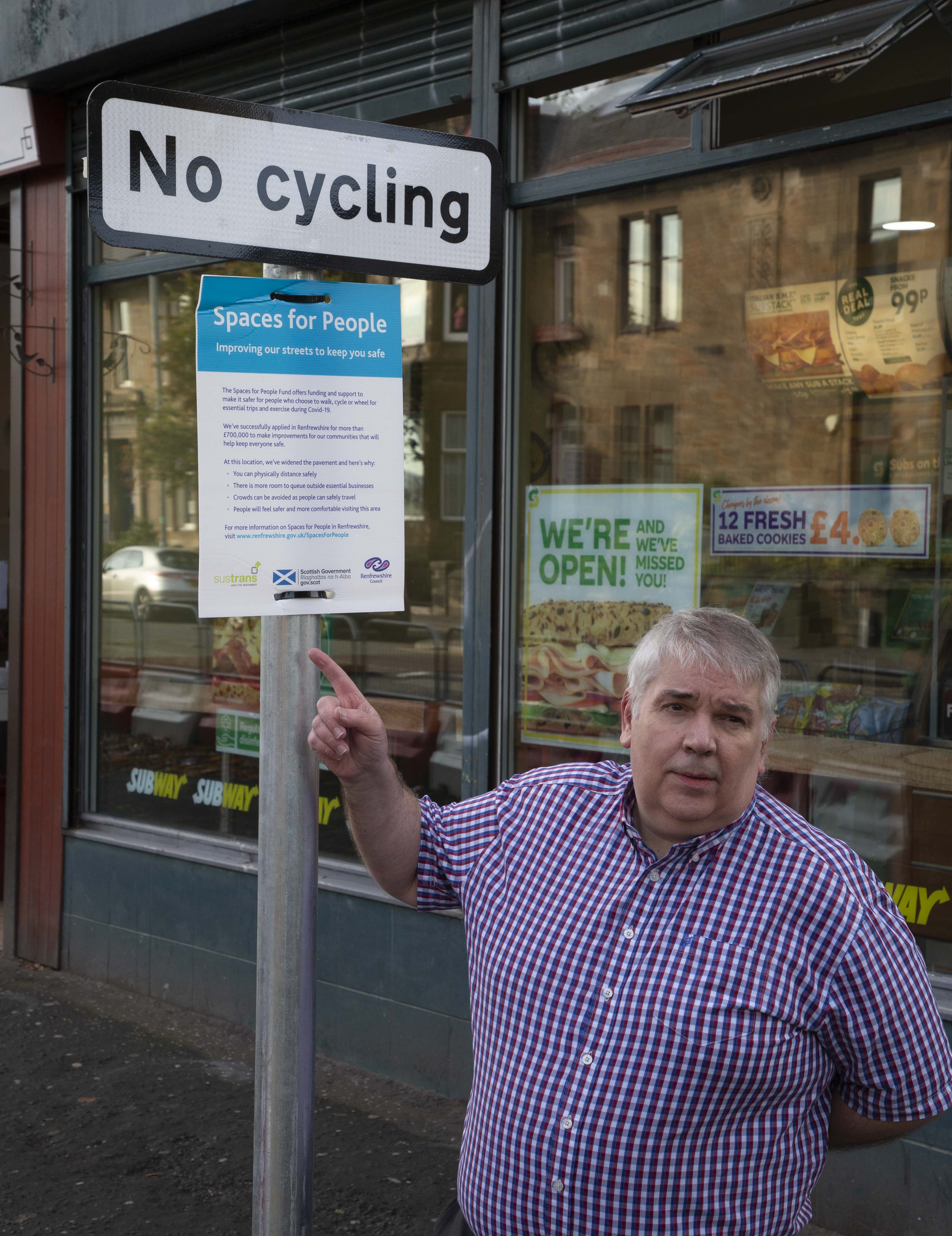 Since the barricades were put in place, businesses have seen their takings drop by as much as 40 per cent as customers can’t park their cars, as they would normally do, along that stretch in front of the shops.

Business owners have described the blockade in front of the 18 commercial premises, including shops, food takeaways, pet store, beauty salon and other stores as “a farce” and are calling for the council to remove the barriers.

They say the barriers are discouraging people from shopping in the area and could lead to:

Newsagent, Desmond Barr, whose shop is at 50 Glasgow Road, has been pleading for the council to remove the barriers for several weeks.

A police officer twice visited the site and told Des a report would be submitted to Renfrewshire Council highlighting traffic safety issues.

He also revealed he’s had an email from Sustrans  – the walking and cycling charity who manages the Scottish Government’s grant funding for the Spaces for People programme – confirming they had also written to the council raising the issue of safety at the Glasgow Road barriers.

Des Barr said: “From start to finish this whole project has been a farce and the consequences of placing these barriers in Glasgow Road hasn’t been properly thought through.

“If it wasn’t such a serious issue it would be laughable that after creating a passageway for cyclists, the council erect a new sign at either end of the barriers saying ‘No Cycling’.

“It’s hard enough for shops and businesses that serve the local community to survive Covid-19 lockdown restrictions without this new hammer blow.

“Since these barriers have been erected I’ve seen a 40 per cent drop in turnover. If these barriers aren’t removed, my business will become so bad I’ll be forced to close the newsagent’s shop.

“And it’s not just for business reasons these barriers should be removed. They are a safety hazard. I know of one woman who lost her footing and fell to the ground, when she tried to avoid a cyclist speeding past her as she stood on the bus boarder.”

Neil Gordon, of Gleddoch Butchers, at 60 Glasgow Road said: “My takings are down 30 per cent. Just before these barriers were put up I employed two new members of staff, but with my business being so badly affected, I’d worried that economically these two jobs are now at risk.

“It’s claimed that this new pathway will create more space, but all it has done is provide a meeting point for school pupils who gather to eat their lunch from the takeaway shops here.”

Hayley Barnes, from the So Beau beauty salon, at 44 Glasgow Road, added: “I have quite a few elderly and disabled clients who can’t come to the salon now because they can’t get parked close by.

“I’ve lost around 40 per cent of my business since these barriers went up.”

Susanna Chan, from the Alice Chinese Takeaway said: “These barriers have cost us a lot of business. I’ve even had customers order a takeaway by phone, but when they can’t find a parking space nearby, they’ve given up and not bothered to collect their meal.”

A Renfrewshire Council spokesperson said: “We’re sorry to hear of the issues being raised in relation to temporary barriers installed to widen the footway to enable physical distancing to take place, recognising the narrow pavement at this location which is a busy area, with a secondary school nearby.

“Unfortunately a press release on behalf of business owners relating to this has a number of inaccuracies which detracts from the important issues facing local businesses. To help clarify, neither Police Scotland nor Sustrans have raised any safety issues with us and the widened pavement is not a cycle lane, while no lane on Glasgow Road has been removed to accommodate the barriers and access to the bus stop has been maintained. We appreciate the importance of having parking available to access local facilities and there is ample parking at this location, both on the opposite side and elsewhere on Glasgow Road, on adjacent streets and at off-street car parks behind some of the businesses mentioned.

“Affected businesses were visited and notified in advance of the barriers being installed and again following their implementation, with their views considered alongside a review we commissioned to consider any improvements. This review has highlighted no safety concerns and we will take forward its recommendations in consultation with Sustrans and local business owners, continuing to support the businesses in the area while ensuring the protection of public health remains the priority.

“We recognise the impact Coronavirus has had on local businesses and have been running a campaign encouraging people to Spend Local. We continue to listen and consider all available ways to play our part in assisting local businesses, which has seen us award more than 2,600 government grants to small businesses in Renfrewshire, providing £28million in immediate support, and following a survey of 500 local companies on what they need, we have introduced a series of tailored loans and grants to enable businesses to adapt, recover and restart. Full details on business support is available on our website.”