I was born in a two roomed tenement flat in Broomlands Street across from Woodside Cemetery and the old Carbrook Street School, up where the St.Mirren supporters club is today. The West End was great place to live. It was so central we walked everywhere, down King Street to ‘the scheme’ to visit my granny, to the Regal Cinema on Saturday mornings to go to the Minors or to Paisley Museum next to the library for the museum club and to the Paisley Baths in Storey Street on a Thursday night for family swimming in the ladies pool. 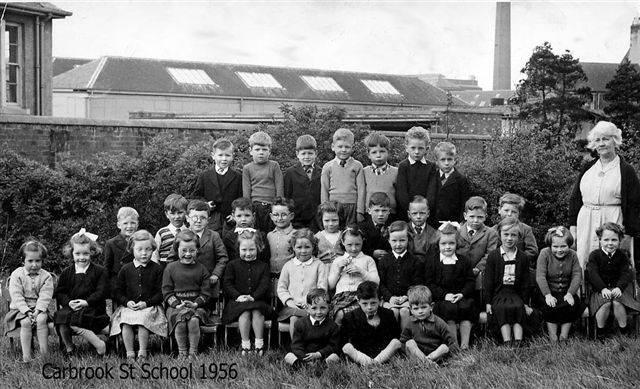 Our nearest chippie was Bruno’s but the fish teas from Allan’s are as good now as they were back in the day, when you would get a poke of chips as a chittering bite when you came out the baths. We played in Maxwellton Park with its tennis courts and swings and got hot peas and vinegar from McCormack’s, we used to sneak into the derelict site next to the Coats’s mill where they built Maxwellton School and had a gang den called Q7.

Andy Adam was our grocer and Mr MacDowell the butcher, Jessie Blackwood owned the corner shop and Mr Niven was the tobacconist. We would wander as far as Ferguslie Park to play in the round pond with the island in the middle of it or cut through the Well Meadow (where witches were hung) to go to Yankee Mags in Lady Lane. A shopping trip “up the toon” would not be complete without visiting the Variety Stores, I remember one time the whole family going to the La Scala restaurant for our tea and then in to the cinema to watch Father Goose. I attended the West Primary school next door to Coats’s Mill and the 9th Paisley Coy of the Boy’s Brigade at Martyr’s Parish church where my Dad was an Elder. In 1966 aged 10 we moved to Foxbar where we had the luxury of an indoor toilet and a bath and I shared a bedroom with only my brother. We were a long way from the town it felt like living in the countryside apart from the smell from the glue factory at the bottom of the Chain Road, I remember finding it difficult to sleep without the noise of the traffic.
Those early years in Foxbar were like being on a permanent holiday especially during long summer holidays when the

Gleniffer Braes were our back yard and we had the Brandy Burn to cool off in, the Bluebell Wood to play hide and seek in and the Red Rock Canyon to fight in. In winter we had Elderslie golf course to sledge on and Durrockstock Dam to skate on although some may remember the tragedy involving a couple of local lads up there. The vans made their rounds McNeil and Couperwhite’s for groceries, the chip van and Dalzell’s rolls all made their stops as well as the ice cream vans Palombo, Porelli and Jaconelli (please forgive the spelling). I had a paper round working for James Robertson from the Spey Avenue shops with two deliveries per day and the huge Sunday morning bag.

I went to Amochrie Primary school but unlike every other member of my family including my parents I went to Stanely Green secondary school and not Camphill. I enjoyed school. Miss Kerr for maths, Mr Houston for PE (bully), Dusty Millar for metalwork and Mr (I fought a war for guys like you) McMillan for technical drawing, my favourite was Mr Peacock our English teacher and an inspirational man. Outside of school we had discos at the community centre where they were addicted to Freda Payne’s “Band of Gold” and an excellent youth club up at Stanely Green School where my interest in the opposite sex first reared its ugly head.

We would still have to go into town from school to go to the baths and I was back in my element and introduced a whole generation of school boys to the delights of eating in the British Restaurant underneath the town hall, 3 courses and orange squash for the price of a fish supper! My class was one of the first to stay in school to the age of 16 and the first class to take O levels at Stanely Green School, then it was out and into the big wide world as an apprentice at Lochhead and Carnduff in Shuttle Street. At that age you lived for the weekend when you would spend your hard earned cash on dancing and trying to get a lumber at Bobbie Barr’s, the Trinity or the Watermill. Favourite watering holes for us under age drinkers were the Fiesta, Bungalow Bar or the Station (Bisland’s) Bar. We always cut a dash in our Crombie coats or denim jackets, Levi stay-pressed or Wrangler jeans, Doc Martens or coasters and Fair Isle pullovers. Curzon and Ben Sherman checked shirts were all the rage or a made to order cowboy shirt out of Carty’s where my brother had a Saturday job.

At 16 I met the love of my life, a girl originally from Dunn Street whose family moved to Ferguslie, right across the street from my cousin. One night we took the train up to Glasgow to go to the Clouds disco in the old Green’s Playhouse and that was it, I had been exposed to the world beyond Paisley, I knew then there was no going back! I left the town in 1974 and although I have been back throughout the years I will never live there again. I am writing this in Amman, Jordan where recently my wife and I recently attended a function in the British embassy, a woman who works in the Canadian embassy introduced herself and said she knew my wife from Ferguslie and St James’s School! She had left Paisley when she was in her teens and here we were on a balmy summer’s evening on the ambassador’s lawn, chatting about the Hippy Chippy, the Caprice and Cardosi’s. Those Buddies get everywhere!