The Paisley Cemetery Company Limited started business in 1845, to provide additional burial space at Woodside in response to the needs of a rapidly growing local population. 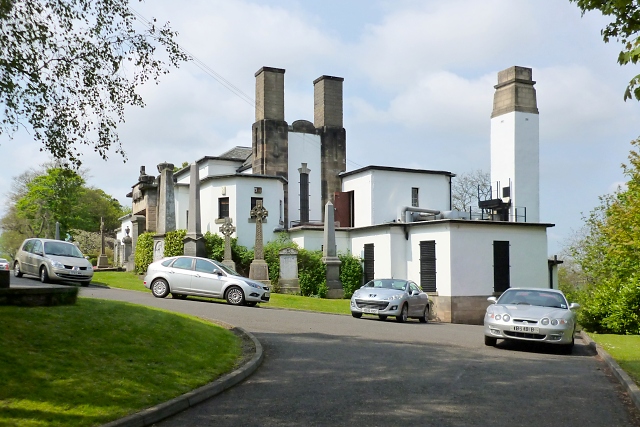 Woodside Cemetery was laid out in 1845 to a design drawn up by Stewart Murray, curator of Glasgow Botanic Gardens.
Situated on a low hill-top position between Woodside House and Ferguslie House, the “garden cemetery” extended to just over 20 acres and incorporated the recently built Martyr’s Church and the adjacent Covenanter Martyrs Memorial.
Murray’s design was inspired by the earlier garden cemetery, The Glasgow Necropolis, which also took its inspiration from Pere Lachaise, the first hill-top garden cemetery, in Paris, laid out in 1804 by Alexandre-Theodore Brongiart.

The Company went on to become a member of the Federation of British Cremation Authorities in 1938, with the provision of a new, purpose built crematorium, designed by the well-known local architect James Steel Maitland. One of the finest buildings of its kind anywhere in the country; it was opened on 28th October 1938 by the Rt, Hon. Lord Salveson, and is today a well preserved listed building.

Martyrs’ Parish Church
The church, which was built in 1835, is located within Woodside Cemetery. The martyrs of its name are those commemorated by the Martyrs’ Monument – Link – on the church’s northern side. The church opened on the 20th of November 1835 (it is no longer in ecclesiastical use, and is now used by a Scout group). The Martyrs’ Parish (quoad sacra) was disjoined from the High Kirk and the Abbey Parish of Paisley on the 6th of July 1874. In the 1843 Disruption, a group broke away, later meeting in the Free Martyrs’ Church (built in 1848, and now called Martyrs’ Memorial Church) on Broomlands St.