Miss Kibble’s Reformatory School was founded in July 1859 by a charitable bequest from Miss Elizabeth Kibble, who came from a wealthy Paisley textile family. In her last will and testament of 1840 she laid down that the money should be used to ‘found and endow in Paisley an institution for the purpose of reclaiming youthful offenders against the laws’. 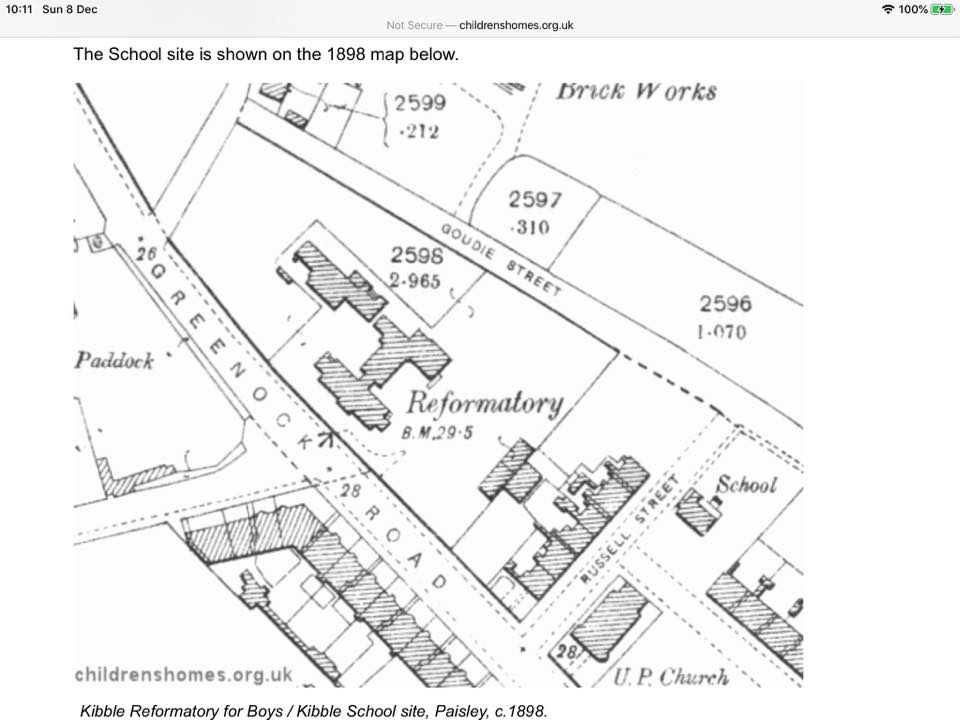 A three-acre site was purchased on the east side of the Greenock Road and a suitable building erected. The first residents were transferred from Paisley Reformatory.

Kibble’s first Admissions Register (1859-1880) records that the most common offences were thefts – usually of shoes, food or clothing; given that there was no state welfare system at this time, as well as the nature of the items stolen, it appears that many of these thefts were committed due to deprivation and genuine need rather than from malicious intent. Indeed, many of the boys recorded in this register were orphans, or victims of parental neglect or abandonment. They were also notably younger than later admissions: as young as eight years old, with the majority between ten and twelve years of age.

During this period, it was standard practice to send boys to an adult prison – usually for fourteen days before admission to reformatory school, where they were committed for three to five years with early release being very exceptional. The practice of imposing-prison sentences on children was abolished in Scotland in 1893, under the terms of the Day Industrial Schools (Scotland) Act, and several years later in England.

An inspection in 1865 noted that ome useful alterations to the premises had been carried out. The schoolroom and laundry had been enlarged, and a joiner’s shop, a drying room, and two cells added. The educational condition of the school was good, the reading of the boys throughout the classes being much above the average, and their ciphering and dictation very good. The industrial training comprised tailoring, shoemaking, and cultivation of the garden. The average number of boys in the school that year was 53.

In 1868 fifteen acres of rough land were rented about thre-quarters of a mile from the school, with the aim of providing the boys with outdoor employment through its reclamation and cultivation. A further 15 acres of adjoining moss land were added in 1871.

The farmland cultivated by the school provided plenty of employment for the boys. They were also occupied in the garden and each boy had a plot of ground for himself. Three cows and a pony were kept. The were now 17 boys working as tailors, and 15 as shoemakers. Others worked in the large joiner’s shop.

In the 1920s, the school became known as Kibble Farm School. In 1933, the establishment became an Approved School, one of the new institutions introduced by the Children and Young Persons (Scotland) Act to replace the existing system of Reformatories and Industrial Schools. It now accommodated up to 130 Senior Boys, aged from 14 to 17 years at their date of admission. The superintendent was now Mr G. Gardner. In 1943, the school was described as providing specialised training in market gardening, dairywork, pig and poultry rearing, carpentry and shoemaking. Over the years many improvements were made.

The 1968 Social Work (Scotland) Act aimed to bring Approved Schools in Scotland under the control of local authority social work departments. As a result of a title in a list drawn up by the Scottish Education Department, Kibble became referred to as a ‘List D’ school. In 1996, following a re-organisation of local authority boundaries and funding, Kibble became an Education and Care Centre. It now operates as a social enterprise, selling services to local authorities.

Kibble’s deeply rooted history has its origins in 1840 upon the death of Miss Elizabeth Kibble, heiress to a large textile fortune. On her death in 1840, she left a portion of her wealth to “found and endow in Paisley, an institution for the purpose of reclaiming youthful offenders against the laws”. Kibble has evolved for more than a century and a half from this point and has always stayed true to its original mission: supporting young people facing adversity. Kibble is one of Scotland’s oldest charities and seeks to honour Elizabeth Kibble’s legacy by continuing to support young people from the local area and across Scotland. 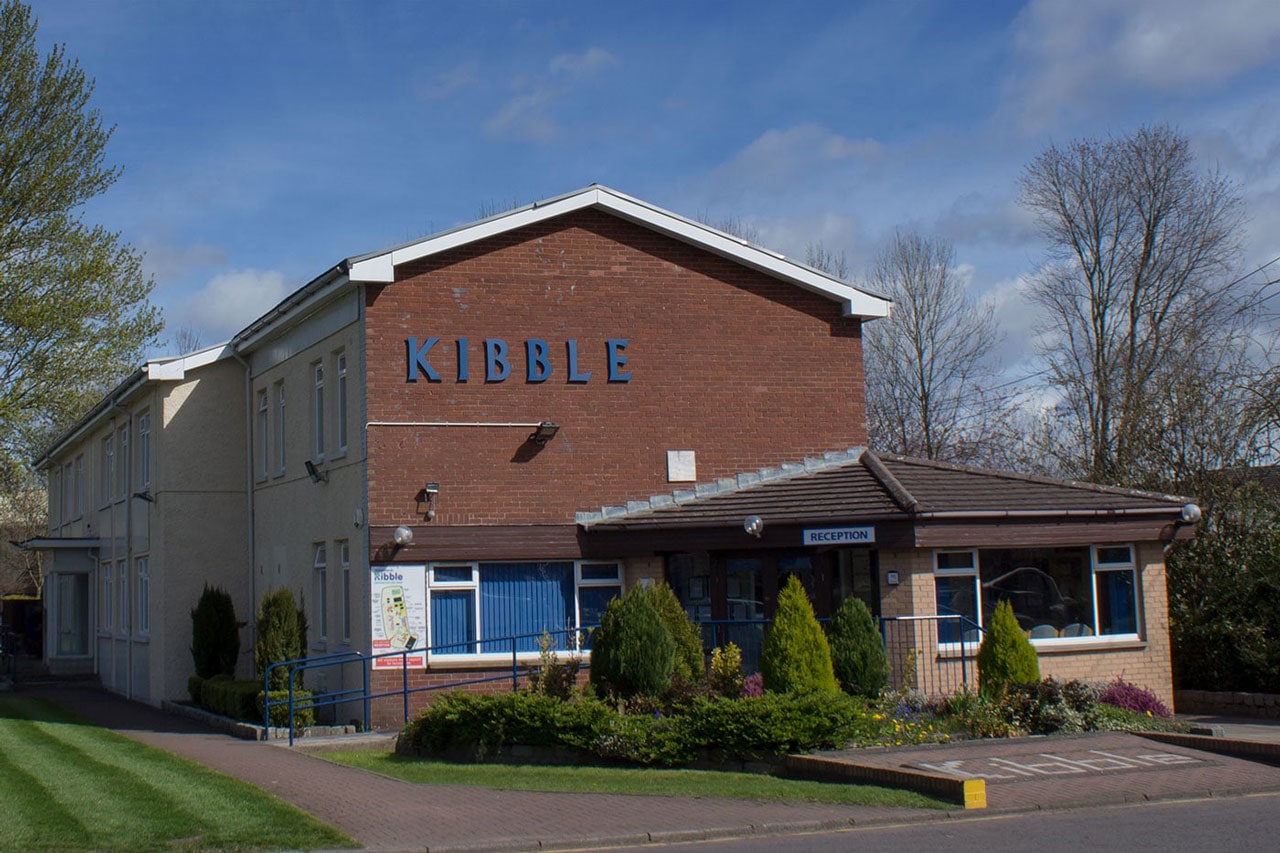 This institution has lasted through the generations and has evolved into Kibble as we know it now. From the beginning, Kibble placed a strong emphasis on equipping the young people it looked after to lead purposeful and independent lives after they left the school. Our earliest records show that young boys were trained and found positions in trades such as tailoring, shoe making, agricultural and dairy work.

This focus on providing disadvantaged young people with the skills, experience and training to successfully embark on independent life is an ethos that has endured under several different leaderships through more than a century of radical social change and various incarnations of the education model.

Changes in the education system have seen Kibble function as a Reformatory School, an Approved School and a List D school until its current model of an Education and Care Centre was created in 1996 after a re-organisation of local authority boundaries and funding. While the focus on skills and training remains strong, Kibble continues to respond to the needs of young people as they arise and this now includes a strong emphasis on care and the protection of vulnerable young people. To meet this need, our range of services has widened considerably while we remain committed to providing young people with the care and support they need to overcome adversity and live empowered lives. If you’d like to explore more of Kibble’s history, please visit our Lasting Legacy website.