The history of the Royal Alexandra infirmary goes back to 1786 when a general dispensary for the sick poor was opened in the centre of Paisley, offering outpatient medical treatment and advice. By 1805, this had become a House of Recovery for patients with infectious diseases, in an attempt to stop the spread of infection in the expanding industrial town. By 1850 the building had been enlarged and was a general hospital, called Paisley Infirmary and Dispensary. It had both medical and surgical wards. 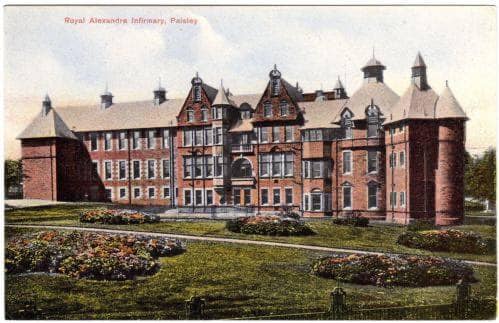 In 1886, with patient numbers increasing, the hospital committee decided to build a new, larger, building in a greener site, away from the centre of the city. This was to be a general infirmary that included infectious diseases accommodation. Subscriptions for the hospital raised £49000 and Peter Coats, a local industrialist and philanthropist, persuaded the committee to accept a plan for a 142 bed hospital.

The building was given to the local architect Thomas Graham Abercrombie to design and work began on the new hospital in 1894. The memorial stone was laid in 1897. The new hospital opened in 1900 and was called the Royal Alexandra Infirmary. It had three pavilions and an infectious diseases block. A chapel, which had seating for 100 was dedicated in 1901.

The accommodation for the nurses was originally to have been in attic rooms, but Peter Coats did not like this arrangement and in 1894 he advised that he would bear the cost of a separate nurses home.
Completed in 1896, this was the first part of the complex to be finished. It even had a photography dark room in the basement, as many of the nurses were interested in photography.
The out-patient dispensary on Neilston Road was opened in 1902. The nurses home was expanded in 1908 to 64 beds, again as a gift from Peter Coats and the site also included two tennis courts which doubled as a skating pond in the winter.

After the introduction of the National Health Service in 1948, the Board of Management wanted to replace the existing medical buildings in Paisley and bring all the medical services together. The New Royal Alexandra Hospital opened in 1986.