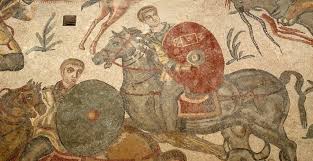 Not much is known of Paisley before recorded history, but what we do know begins at the time of the Roman Occupation of that area, which began around 80 AD. We have the first written accounts of this time period by Claudius Ptolemaeus, or as more commonly known, Ptolemy, the famous Egyptian astronomer, mathematician, and geographer. We are told that before this period Paisley had been occupied by the Damnonni, a Brittonic Celtic tribe who inhabited most of Scotland during that time. The Damnonni tribes were spread from Galloway and Ayrshire in the South, to Strathclyde, Renfrewshire, Ayr and Stirlingshire in the North, alongside parts of Dumbarton and Perthshire, and half the peninsula of Fife. Their primary duns, or native strong points, were ‘Colonia’ near the source of the River Clyde, ‘Lindum’ near Kirkintilloch, ‘Coria’ near Carstairs, ‘Alauna’ at the junction of the Rivers Forth and River Allan and near Stirling, ‘Victoria’ at Loch Orr and near Crieff, and ‘Vanduara’ at Paisley. It is worth noting that there were no towns at this period in history, these would come after, many built on the strong foundations the Roman Empire would leave behind.

The Roman incursion into the area, as I previously mentioned, began around 80 AD, when forts, garrisons and stations were set up throughout the country to subdue the local tribes, while Roman roads were constructed to give access to the main centres of population. The primary one of these new paved highways stretched across the Country from Hadrian’s Wall in the South right up to the Antonine Wall in the North. It spanned from Carlisle in the South up towards Lockerbie, past Carstairs, then on to Carluke, Wishaw, Motherwell and Glasgow, and from there along the banks of the River Clyde to the North. Another paved Roman road branched off it at Glasgow, and stretched out to the West, past Langside and Rosshall, entering Paisley by way of the Causeyside, with forts and outlook stations built at strategic points alongside it.
One of the major forts and fortified Roman encampments of these was erected in Paisley at the hill of Oakshawhead. It was known at ‘Vanduara’, which was the Latinized form of the Brittonic name the Damnonni used for the area ‘Wendur’, which meant ‘white water’. This is fitting, given the area was in the vicinity of the White Cart. The main Roman Citadel and encampment itself took up the entire hill at Oakshawhead, with walls and fortifications extending to the River Cart in the East, to Castlehead in the South where a second citadel existed, and to Woodside in the West where the third citadel was erected. The location at Oakshawhead was strategically chosen close to the native Damnonni village that existed near the banks of the River Clyde, next to what would have been a woodland area at that time period, giving the local hunter gatherer tribes shelter from the storm. During that time period Paisley was extensively covered in great forests, which still existed well into the late 13th Century.

When the Romans finally departed the area in 409 AD they had left a deep and lasting impression on the area and on the natives of the area, turning wild hunters into farmers, teaching trade and commerce, with part of the profits given as tribute to their once-great Empire. There is no denying that time period led to vastly growing the village and improving the area under their occupation. When they finally left, their extensive military fortifications still stood well into the next millennium, alongside their highways and roads that connected them. But it was not just their skills as empire builders that they had imparted, for much of that time period was before the Christianization of their Empire. When we think back to that time, Paisley was a cultural meeting point of ancient Gods. From the Brittonic Gods of the Celtic Peoples, to the Gods the Roman military machine. The Gods of Antiquity once walked our streets from a multitude of Civilizations, all working together for the betterment and benefit of Vanduara.

Today no remnants exist of the Roman encampments from that time, nor of the ancient Damnonni village near the River. We know there were still remnants of it right up to the Seventeenth century, as historic records speak of visitors to the vestiges of the Roman ‘extensive military works’ in the area. However these were lost to history shortly after that time when a new bowling green almost wiped out nearly all evidence of the main Citadel, with only small parts of the walls left behind, and by 1774 the last remnants has been lost to ‘progress’. Today the Roman Encampment that once stood at Oakshawhead has been replaced by luxury flats, theatres, cafés and upmarket coffee shops, hotels, Churches, renowned Theatre Companies, alongside Paisley’s Museum of Weaving, and the Coats Memorial Observatory, while the area where the Damnonni village once stood now plays home to the Paisley Abbey and Paisley Town Hall.