A unique view of the Paisley Prison from Old Sneddon Street in 1964 shortly after the demolition of the north wing. The rest of the structure was pulled down 1968-70 with the Piazza built in its place and over the river, sealing off this view through to the High Street. 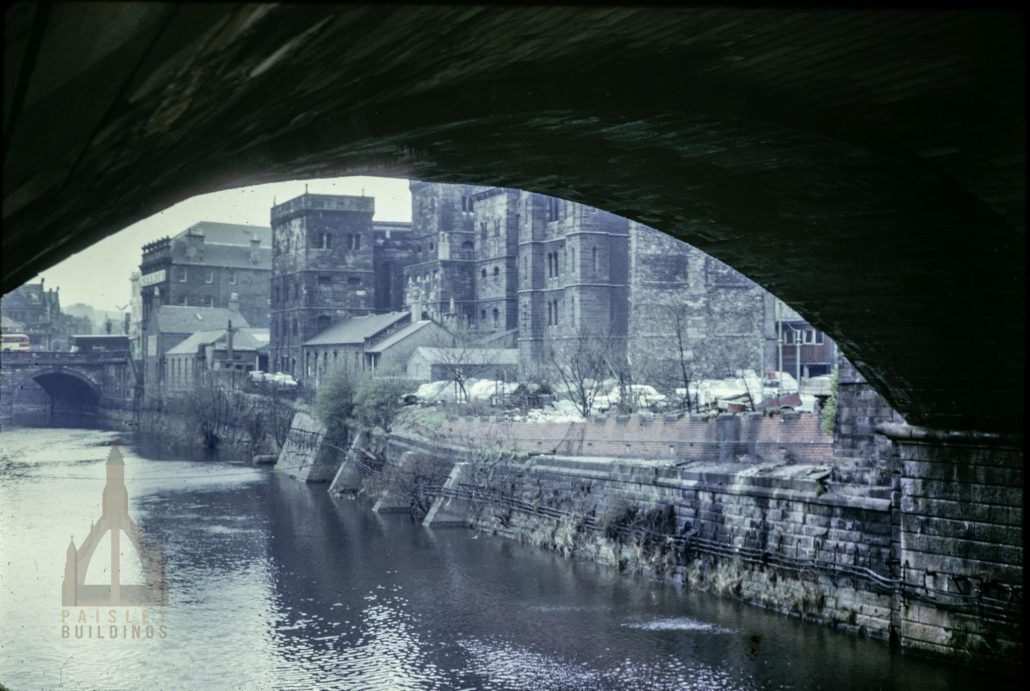 The original building was constructed 1818-21 on the east side of County Square, comprising of the County Buildings, Police Station, and Jail. They were designed by renowned architect Archibald Elliot who specialised in the Castellated Gothic style, as can be seen in buildings such as Loudon Castle, Taymouth Castle, and Jedburgh Castle Jail. At the time, their grandeur far surpassed anything in the town and were often referred to as ‘The Castle’.

The County Buildings were used as both offices for County and Burgh Officials, charged with the day to day operation of the town. The prison buildings consisted of a ‘Gaol end’ and a ‘Bridewell end’, the former for long term prisons and the latter for shorter stays. At this time, the building served as the central prison for the entire modern-day region of Renfrewshire.

By 1848 the prison’s capacity was reached with as many as 150 prisoners being housed from Greenock annually due to the dilapidated condition of its prison at that time. Extensive alterations and additions were made in 1849-50 by Thomas Brown of Edinburgh which included the large southern block with tower. During its time as a prison various escape attempts were made, with some prisoners successful in their endeavours, subsequently disappearing thereafter.

It was eventually closed by the Government in 1883 much against the wishes of the Local Authority and people of Paisley. With the construction of Barlinnie Prison in neighbouring Glasgow, the Government no longer saw a need for a prison at Paisley under their ‘centralisation’ plans.

It was then bought by Paisley Magistrates together with the adjacent School of Design building for £10,000 in 1884. Provost Cochran suggested at the time that the Jail be used as a ‘model lodging house’ but this was not a convincing proposal in the eyes of the magistrates who were of the opinion that no one would choose to stay in a ‘prison’.

In purchasing the buildings, the Council abandoned their plans to construct new Municipal Buildings on what is now Dunn Square. This site, was incrementally acquired at a total expense of over £20,000 for this purpose but new plans then turned toward transforming the space into a ‘Champs d’Elysees on a small scale’ – now Dunn Square.

For several years after the prison building ceased to be used as a prison, the Burgh Police used the building as their headquarters, with some of the old jail cells used as temporary holding cells. In the early 1930s however, the Town Council had made the decision to demolish the building. When their plans were formally put forward in 1937 it caused much uproar, and many joined in protest against the decision. The pressure exerted on the Council forced them to abandon their plans, and the building continued to serve use as a police station until its closure in 1967. The site was then sold to a developer who demolished the entire site between 1968-70 and replaced it with the Piazza Shopping Centre and carpark.