Jenny’s Well Local Nature Reserve (LNR) was designated in 1996 by Renfrewshire Council after an intensive programme of environmental improvements. The Council organised improvements which were carried out with the full co-operation of Ciba Inc. who used to own part of the site before going out of business. New houses are being built on the land that was once factory land. 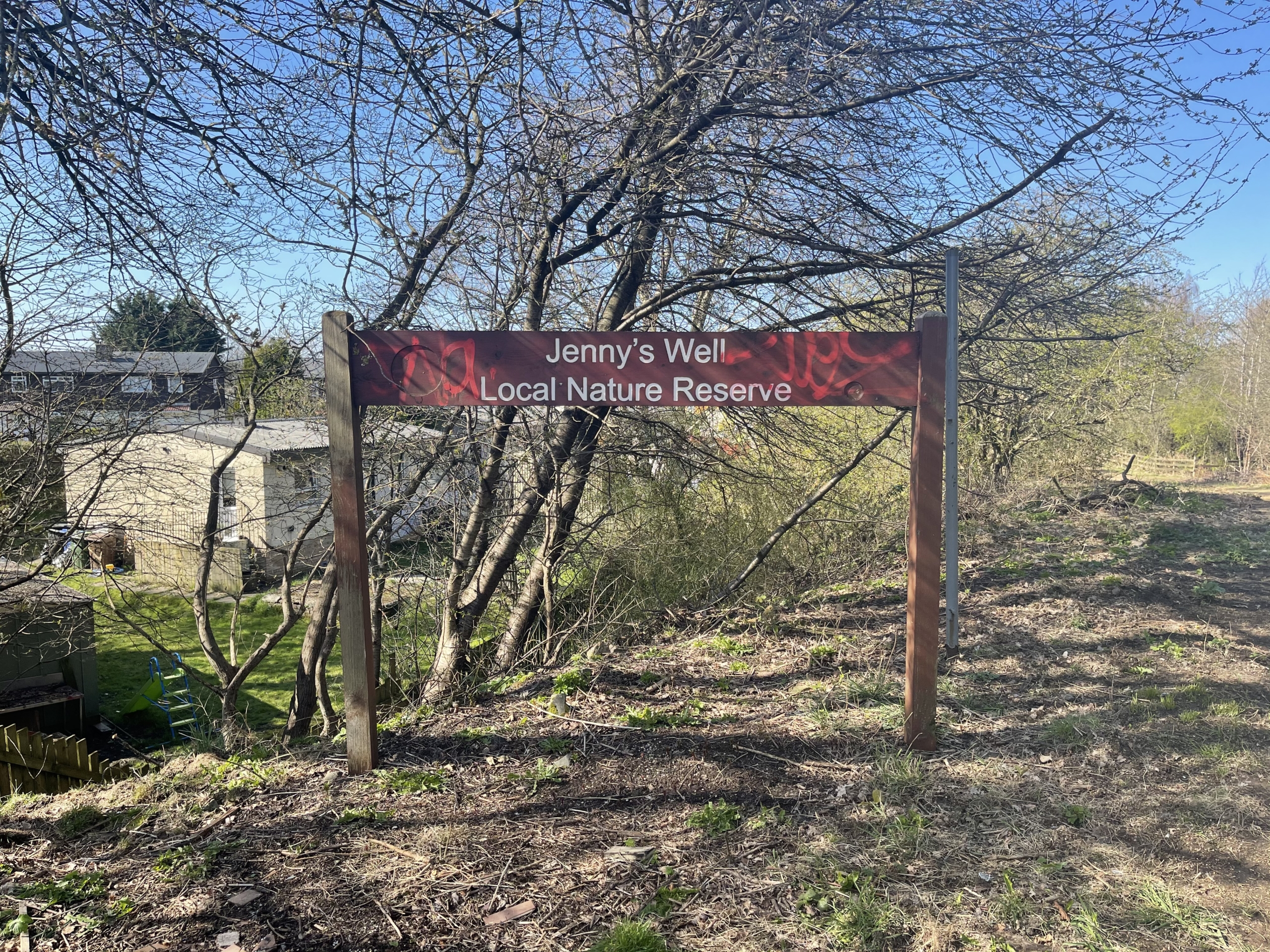 The environmental improvements at Jenny’s Well were started in response to the legacy of years of industrial use and subsequent dereliction. The care and management of the site is now the responsibility of the Reserve Management Committee. The Committee includes representatives of Renfrewshire Council, friends of Jenny’s Well, Jenny’s Well Nursery, Carts Greenspace and members of the local community.

Once this area was an unsightly dump where fly-tipping and abandoned cars were commonplace, but Jenny’s Well now has a new lease of life. Wildlife has been gradually moving into the area. Plants, animals and birds are once again the things that make Jenny’s Well a special place. If you would like to find out more information about Jenny’s Well Local Nature Reserve, please contact: Renfrewshire Council Department of Planning and Transport 0141 842 5811 Travel to Jenny’s Well The easiest way to reach the Local Nature Reserve is from National Cycle Network Leg 7, which runs along the southern boundary of the reserve and is clearly signposted from both Paisley and Glasgow.

The eastern end of the reserve meets Jenny’s Well Road, which is a short cul-de-sac off Hawkhead Road. You can also enter via Cartha Crescent, Whinhill Road and Todholm Road, which all join on to Marnock Terrace, parallel to Barrhead Road. There is a small space for car parking at the end of Whinhill Road. Buses regularly run along Barrhead Road from the centre of Paisley and along Hawkhead Road.

Jenny’s Well is situated less than a mile from the heart of the busy town of Paisley. Lying on the south bank of the White Cart Water, it is sandwiched between the houses and flats of Blackhall and the industrial complex of one of Paisley’s biggest employers, Ciba Inc. Yet in amongst all this human activity nature has formed a haven for wildlife and can now be enjoyed by visitors to the Jenny’s Well Local Nature Reserve.

If today’s surrounding bustle makes the discovery of a nature reserve here surprising, then the history of Jenny’s Well makes the survival of any wildlife here almost unbelievable. Old buildings from the former Jenny’s Well Laundry can still be seen. The installation of the electricity pylons must have been a major disturbance. Prior to this, in the 19th Century, much of the area was quarried for limestone and whinstone. The holes left by these activities attracted the attention of the Council, resulting in the site becoming a municipal landfill site for about 15 years during the 1960s and 1970s. Other parts of the site were intensively managed as allotments in the 1950s and 1960s.

At this time there was still a railway line running through the middle of the site, although the cuttings were infilled as part of the municipal tipping. The reopened Paisley Canal Line takes trains along the north-west boundary. The viaduct carrying this was originally built as an aqueduct for the Glasgow, Paisley and Johnstone Canal in 1806. The bridge was designed by the great Scottish civil engineer Thomas Telford and it was converted for use by the railway after the canal closed in 1881. The importance of this structure is now recognised through its listing as a category ‘A’ building. All of this activity shows, however, that industrial disruption has been occurring here for nearly 200 years.

The surrounding area of Blackhall is now going through further change. Much of the original Council housing is demolished to make way for new houses and community facilities. Despite all of the changes going on around, however, Jenny’s Well has remained a haven for wildlife and a good place to go for a quiet walk. This leaflet describes one possible walk around the Local Nature Reserve and a small sample of the wildlife to be found there. There are plenty of other walking routes available and, for those determined to get some healthy exercise, it’s worth remembering that the National Cycle Network’s leg between Glasgow and Paisley forms the southern boundary of the reserve.

The Discovery Trail has been designed to help you explore the nature reserve. It also provides glimpses of the industrial and transport heritage of the area. Apart from the short, steep section down to the river at Stop 9, the route follows surfaced paths with few steps. Whilst the section down to Stop 9 can often be wet and muddy, the rest of the paths can be managed in ordinary shoes. Some short sections of the path are quite steep and would be a hard push for somebody behind a pram, buggy or wheelchair! The whole route is less than two miles long and the trail should take about an hour to complete we can guarantee that the extra exercise involved will be doing you some good.