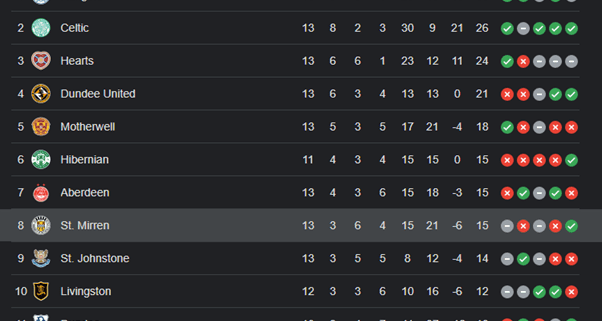 While it’s true the Scottish Premier League isn’t exactly the most competitive league in world football, given that for most of the last… Well, forever really, has been dominated almost exclusively by Celtic and Rangers, pretty much just Celtic for the last 10 years or so. There are actually another 10 teams in the league, today we’re going to be taking a look at St Mirren FC. As one of the oldest teams in the Scottish football league, founded in 1877, I feel like other than for direct rivals, the general consensus is that it’s nice to see them doing well, but how are they performing so far?

Well, it’s not going too well right now. They sit 8th in the league, which in the Premier League would be fine, but when you consider there are only 12 teams in the league..? Yeah, not so great. Their last 5 results featured 2 draws (against Motherwell and St. Johnstone), 2 losses (Rangers and Dundee) and a win over last place Ross County. Not necessarily a place you want to find yourself after 13 games. There are still a lot of matches left to play, but unless you’re looking for the wildest sports betting odds, you know the ones, 1000/1 to win the SPL or something, you’re not going to find many people giving St Mirren any chance of achieving much outside of survival at this point.

At least there has been some respite, some time to reflect, as yet another International break has rolled around, 5 games without a win and 10th placed Livingstone coming up next weekend (20th November), some work needs to be done in and around the training ground to make sure you come back swinging this weekend. A win going into the game against 3rd placed Hearts the following week would be huge for momentum and to help potentially make a push into the top half of the table. But before that, let’s take a look backwards.

Last game, a 0-0 draw against St Johnstone, away from home. All things considered, a pretty solid game was played, out possessed St. Johnstone 55 to 45, outshot them 14 to 6, much higher pass accuracy, just couldn’t find that goal to break the deadlock. In the 86th Minute, St Johnstone had Christopher Kane sent off, the way St. Mirren were playing, another 5-10 minutes of this and they could’ve taken all 3 points. Unfortunately that time wasn’t available and a point was all they could come away with.

Next, the game prior to that was against Dundee, not United, the other one. At home, and it was a very similar performance,it’s surprising that they got nothing from this game, considering they were at home to a club 3 places lower than them. Outposessed Dundee  62 to 38, ideal, outshot them 16 to 8, pass accuracy way better than the St. Johnstone game, 72% compared to Dundees 54%. But an Early goal meant the game was an uphill battle from the start when Max Anderson slotted in the 11th minute.

Again, the game before against Motherwell, away from home. One more to add to the mixed bag of results. Statistically, St. Mirren had battered Motherwell, once more a strong performance and really should’ve come away with 3 points, again, outposessing their opponents 63% to 37%, again out shooting their target 23 to 8, with 10 on target. But again they found themselves on the back foot after 2 early goals in the second half, Tony Watt slotting in the 48th minute and then converting a 52nd minute penalty. But St. Mirren did manage to mount a comeback mid way through the 2nd half, Eamonn Brophy bagging a goal in the 74th minute and then getting his second of the game after he converted a 78th minute penalty. See, mixed bag?

Rarely do you ever see a team perform so consistently, taking control of games and then NOT getting a result, ALL THE TIME. Occasionally, it happens, look at Celtic Vs Barcelona from the Champions League many years ago, if you showed somebody from the past the stats from that game prior to the game they’d have fully thought you were having a laugh wouldn’t they, let’s be honest. But, during and after the international break, St. Mirren really need to work on tightening things up at the back, given their performances against the teams around them, they really could push up the table, whether they’ll actually challenge for anything remains doubtful.

Anyway, St.Mirren fans, what do you think about the way your team has been performing lately? Are you hoping they can pick things up and make a push on the top half of the table? The stats show they’re capable, but leaking at the back and being unable to put games to bed seems to be a key problem, let us know what you think! Take care folks!