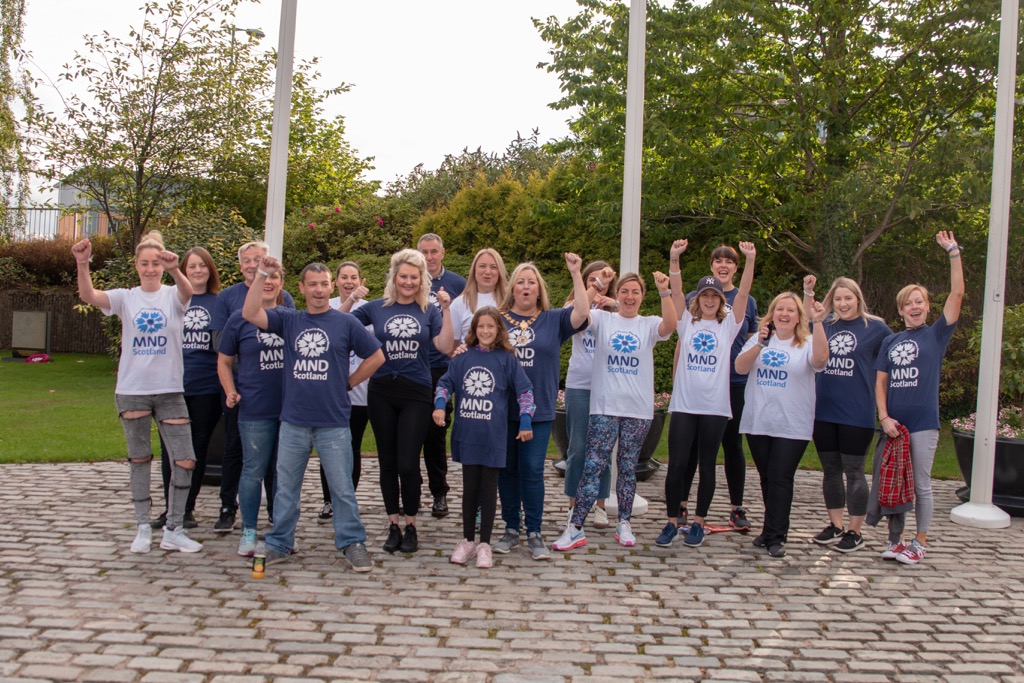 Throughout 2018, Provost of Renfrewshire, Lorraine Cameron, has been doing her piece for charity, helping to raise funds and awareness for her chosen charity – MND Scotland.

From hopping aboard trains spreading awareness to all corners of Renfrewshire, to taking a team up to Killiecrankie for a sponsored swing, Provost Cameron has been keeping busy.

MND Scotland was founded as the Scottish Motor Neurone Disease Association in 1981 by John Macleod, a Strathclyde police officer and his wife Peggy. 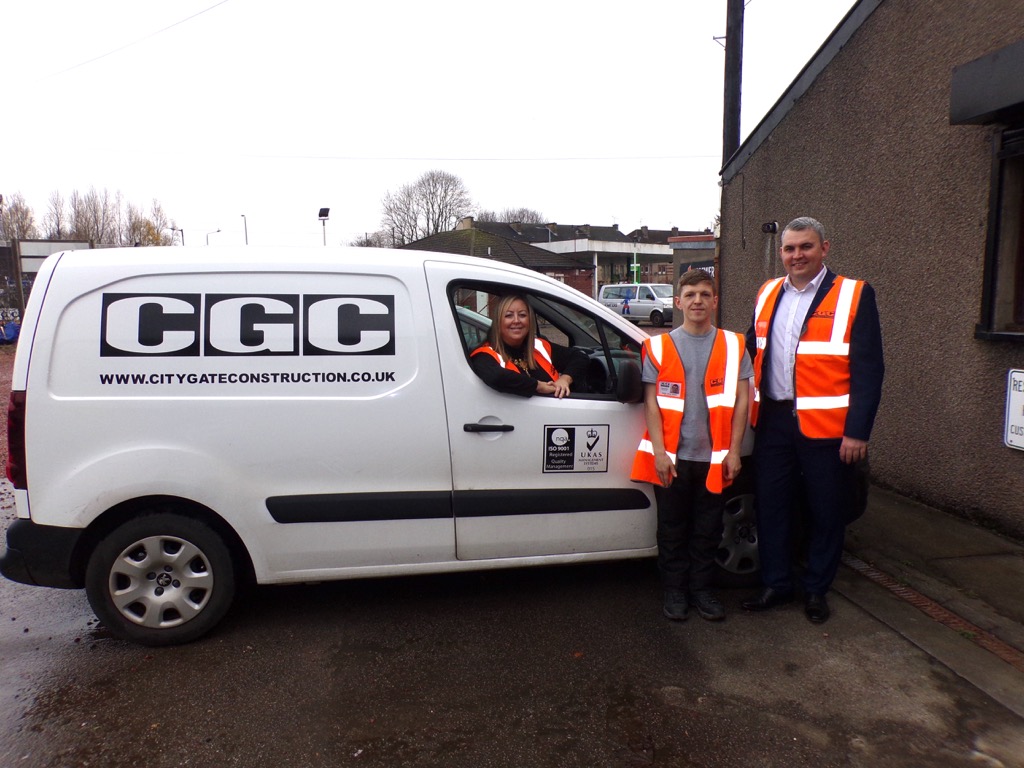 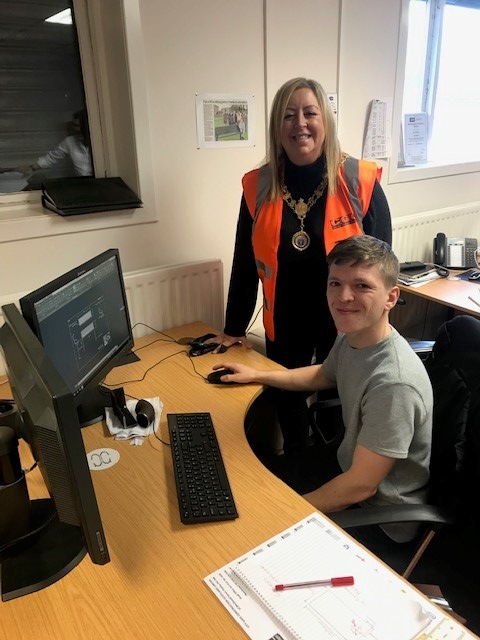 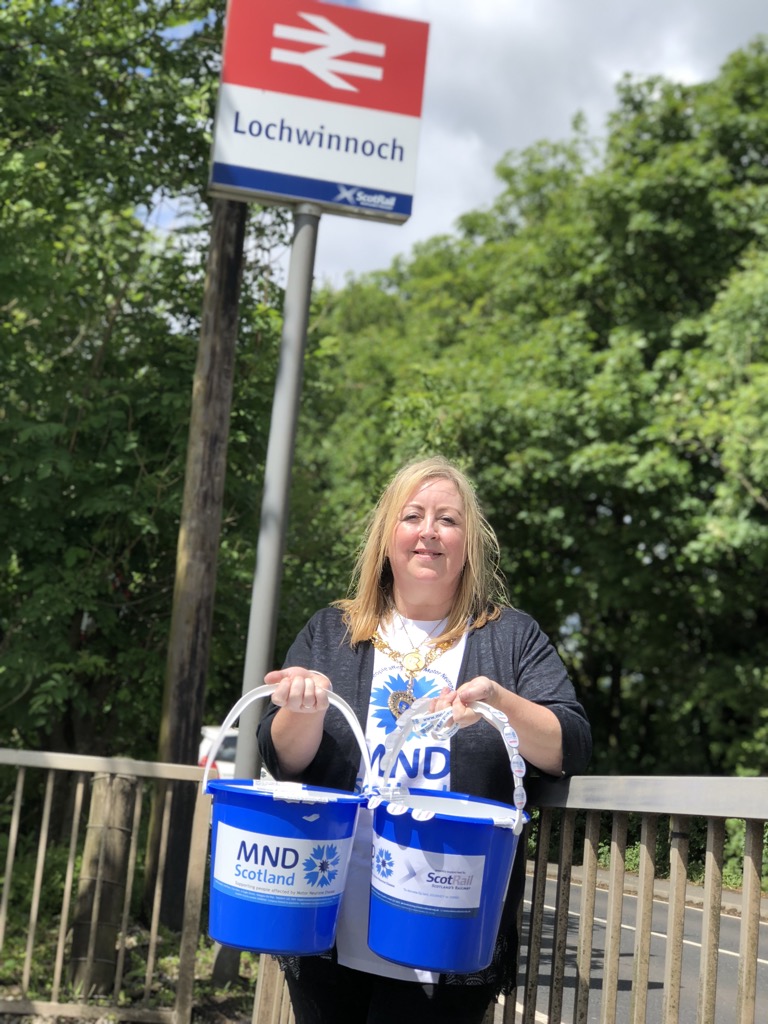 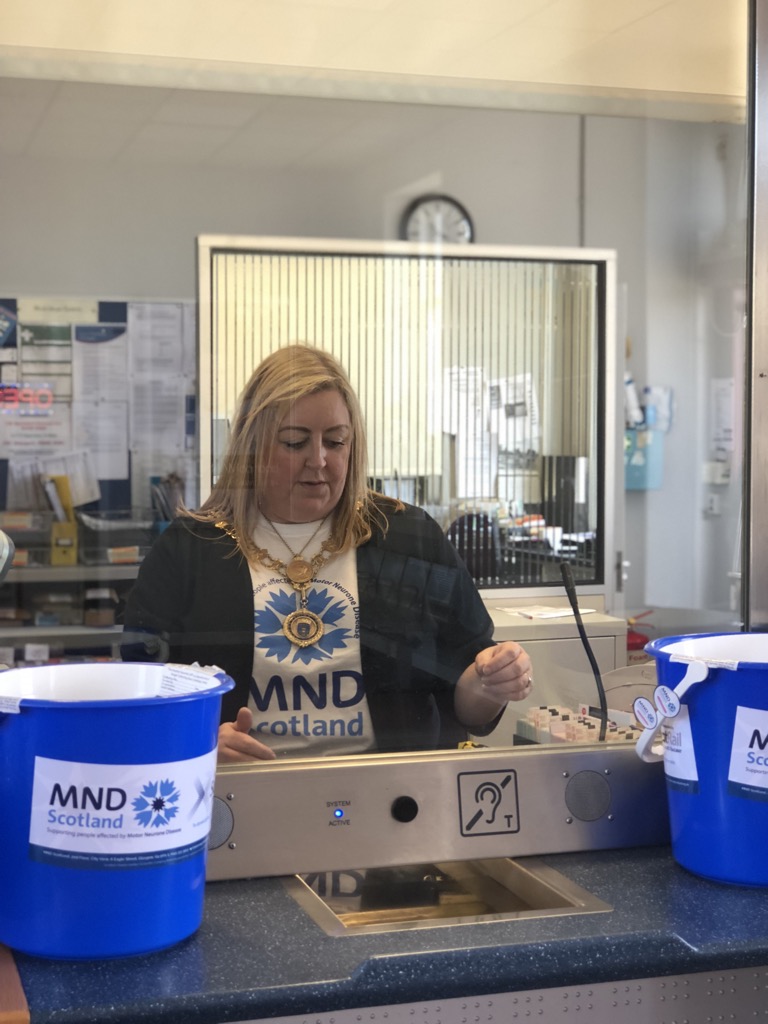 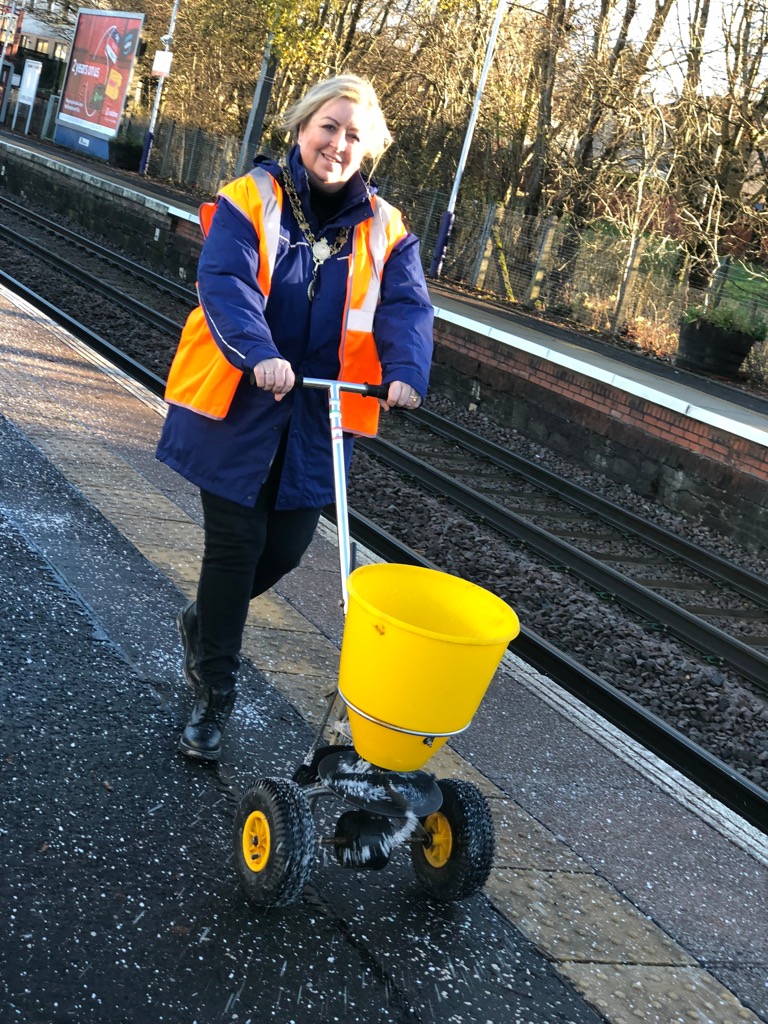 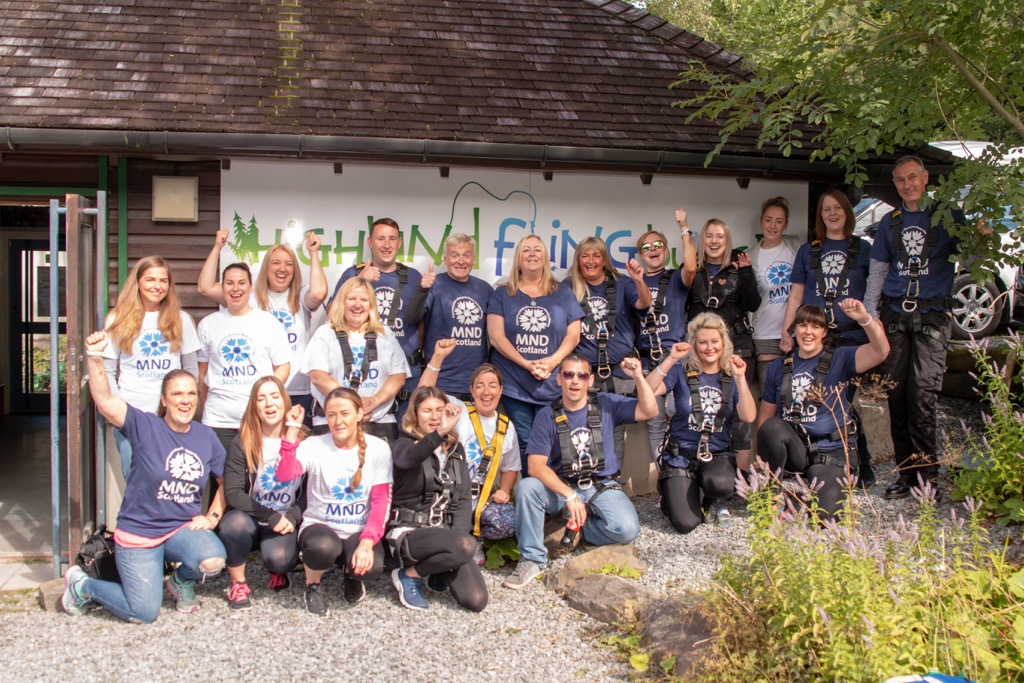 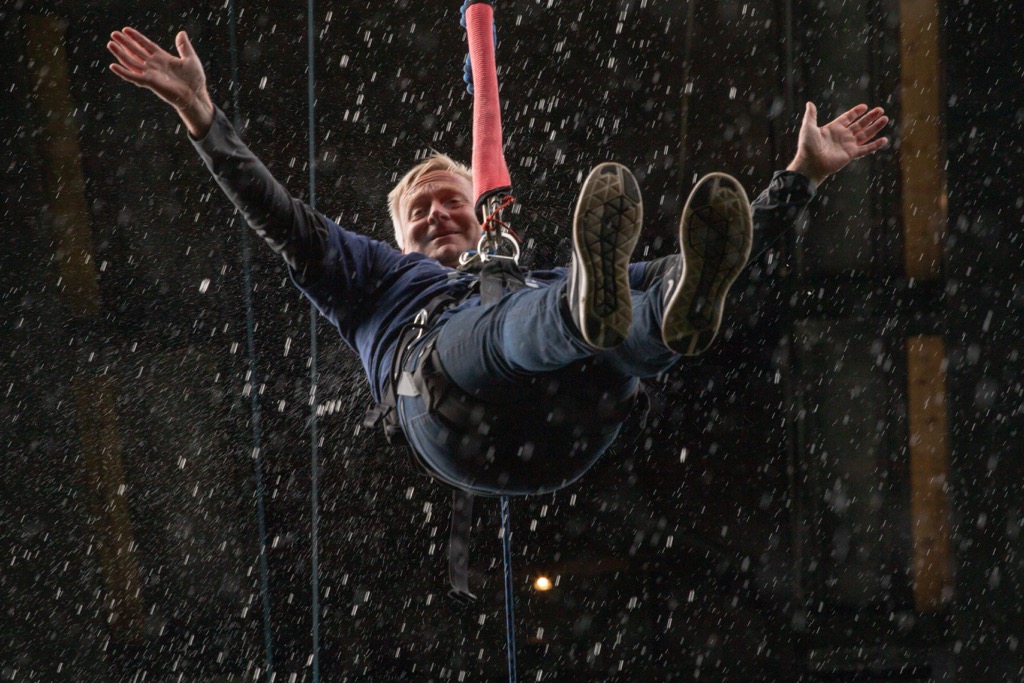 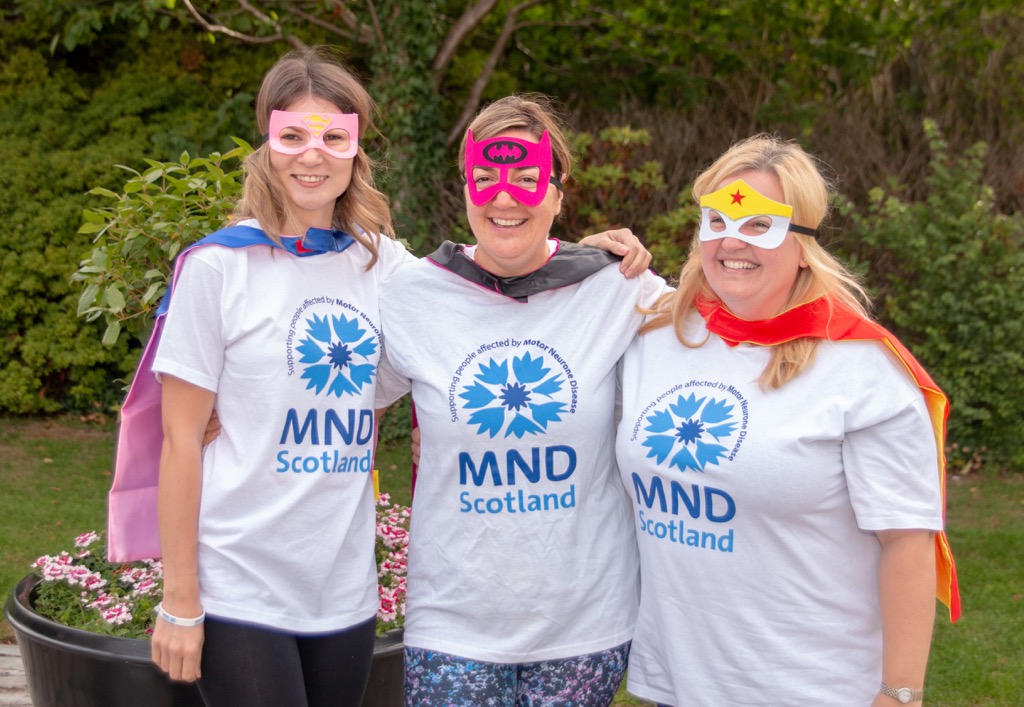 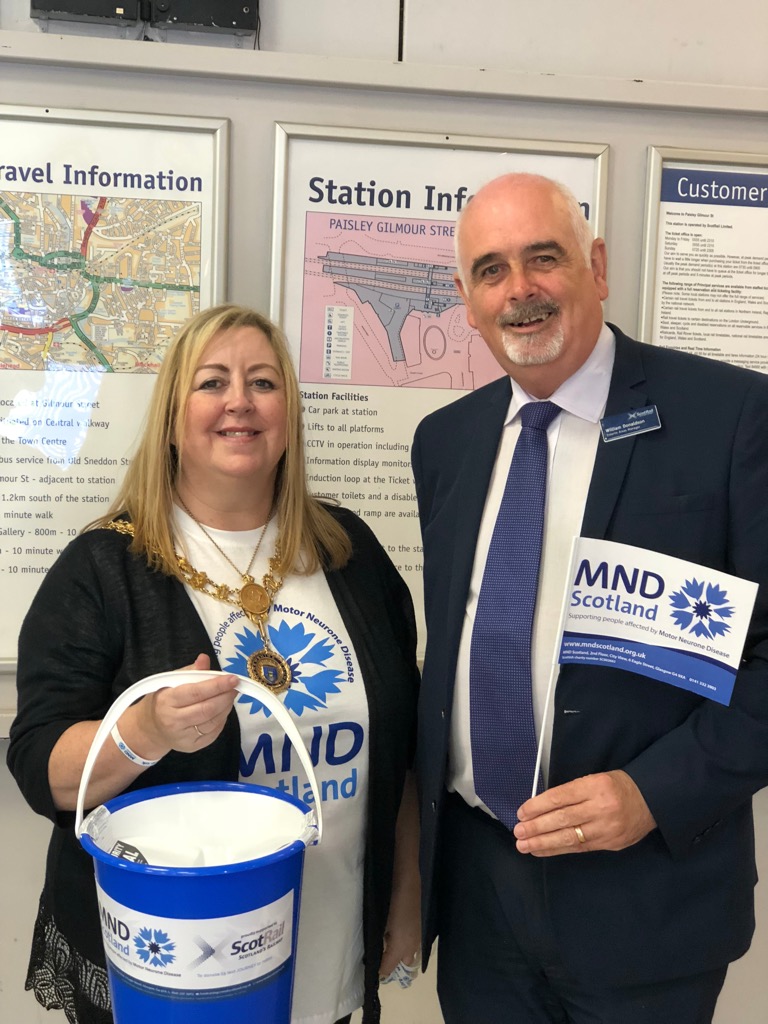 At the time, services were limited, and health professionals had little or no knowledge of the condition.

John had been visiting Charing Cross Hospital in London when he learned about a charity that was already providing support for people with Motor Neurone Disease in England, and became determined to set up a similar organisation here in Scotland.

Today, MND Scotland strive to reduce the impact of MND on the lives of those affected, by offering services such as benefits advice, equipment loans, counselling, advocacy and a grants programme.

There are over 450 people in Scotland currently living with MND and on average almost 200 people are diagnosed each year.

Sadly, around 53% of those diagnosed will die within one year.

Provost Cameron said “I lost my mum to MND in 2011 and the charity is very close to my heart. I really love that as part of my role as Provost I’m able to support the amazing work that charities such as MND Scotland undertake in our communities.

“It’s been a brilliant year from start to finish and I’ve had a ball getting out and about in the community spreading the message far and wide.

“One of the highlights was taking a team of daredevils up to the Garry Bridge in Killiecrankie to take part in the Highland Fling Swing. Our brave fundraisers experienced a 15-metre free fall from the bridge and everyone had a great day.

“I’ve also been honoured to work closely with Scotrail this year, who also support MND Scotland. For MND Awareness Day I travelled around Renfrewshire by train, raising money and awareness for the charity, and I also worked for a day at Johnstone Train Station as part of my Working Challenge.

“There are currently 14 people living in Renfrewshire with MND – but when you consider the number of family, friends, and colleagues the number of people affected by MND locally is actually much higher. All the money raised this year will help MND Scotland offer essential services and go towards research to find treatments and a cure for MND.”

As well as working with Scotrail, Provost Cameron also spent a day working with City Gate Construction and hosted a charity ball to raise essential funds.

Iain McWhirter, Head of Fundraising at MND Scotland said: “MND Scotland was very grateful to be chosen as one of Provost Cameron’s chosen charities and we have enjoyed following her activities throughout the year.

“This summer we announced the launch of the first Motor Neurone Disease clinical drug trial in Scotland, in over 20 years.

“This funding is part of a total commitment of over £1.5 million into clinical drugs trials being made by MND Scotland, and developments like this can only happen thanks, in part, to the support given by Provost Cameron and the people of Renfrewshire.”

Provost Cameron will support local charities, St Vincent’s Hospice and ACORD Hospice, in the next two years and will return to fundraising for MND Scotland in 2021.

Plan your journeys in advance this Hogmanay
Scroll to top