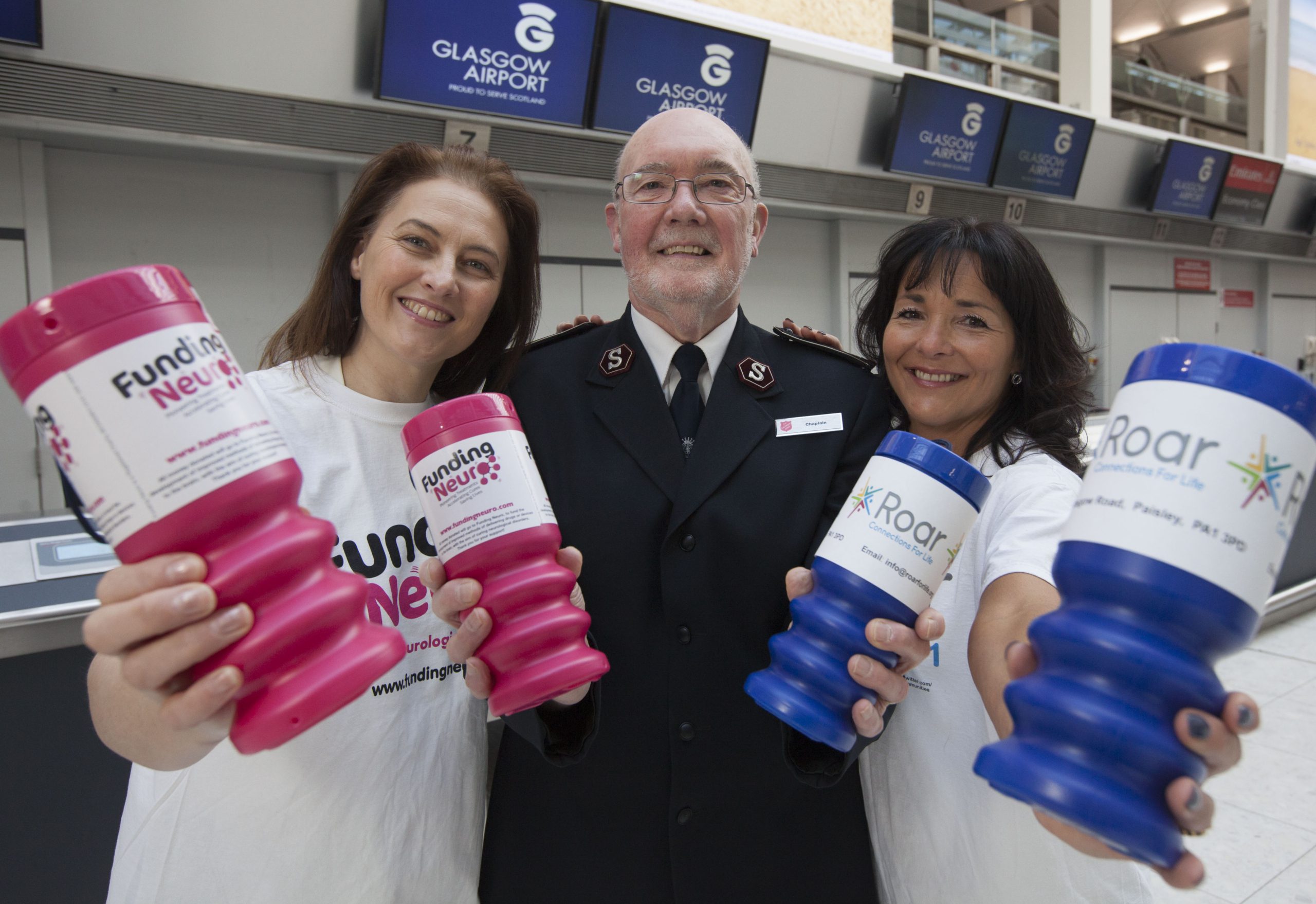 Glasgow Airport’s Chaplain’s Charity will support two charities based in Glasgow and Renfrewshire in 2018.

Chaplain Keith Banks and his team will be supported by staff from across the Glasgow Airport campus in raising vital funds for Glasgow-based Funding Neuro and the Roar – Connections for Life – throughout 2018.

Keith Banks, who has been the airport’s chaplain since 2008, said: “Towards the end of last year I asked my colleagues to nominate a local charity the chaplaincy team and Glasgow Airport could support in 2018.

“We received many really worthy nominations for fantastic organisations doing great work. It was really difficult to choose just one beneficiary charity, so we decided to pick two – one from Glasgow and another from Renfrewshire given the airport’s close links with both areas.

“Funding Neuro and Roar are two local charities providing different, yet incredibly worthwhile services and I am determined to ensure that Glasgow Airport make a significant contribution to support their fine work this year.”

Last year the airport’s chaplaincy raised more than £7,600 for British Heart Foundation (Scotland) and Keith and the chaplaincy team are hopeful this record sum can be matched, if not bettered, in 2018.

Introduced by Keith in 2010, the Chaplain’s Charity has raised more than £40,000 in total for a number of organisations including The Teddy Bear Foundation, CHAS, Robin House Children’s Hospice, Teenage Cancer Trust, The Salvation Army, Wish upon a Star and Make a Wish.

He added: ‘As always I’m very grateful to my colleagues across the airport – and of course our incredibly generous passengers – who help raise these vital funds each year.”

The charity, based in North Street, Glasgow, took the unusual step in 2015 to set up a crowdfunding page to raise £900,000 to finance a clinical trial to treat 18 children with deadly DIPG brain tumours.

Sharon Kane, Funding Neuro’s chief executive, said: “We are thrilled Keith and his team have chosen to support Funding Neuro. This will enable us to continue our work extending the lives of children with brain tumours and support our research into debilitating conditions such as Parkinson’s disease and Motor Neurone Disease.

“As well as raising vital funds we hope that the partnership will allow us to showcase our work to the many millions of people who pass through the airport throughout the year.”

Based in Paisley, Roar provides preventative, health and wellbeing services for older people to connect lives and reduce social isolation and loneliness. The charity provides opportunities to help older people stay as mobile as they can, reducing their risk of falls and encouraging them to socialise in various leisure activities.

Nicola Hanssen, Roar’s general manager, said: “Support from the Chaplain’s Charity will enable us to expand our services even further in Renfrewshire in 2018. For example, through the generosity of Glasgow Airport staff and passengers, we’ll be able to expand our falls preventions and companionship services, which are invaluable to many of our elderly service users who perhaps have mobility issues, poor social networks and are at risk of loneliness and depression.”

To find out more about the work of both charities visit: www.fundingneuro.com, or www.roarforlife.org