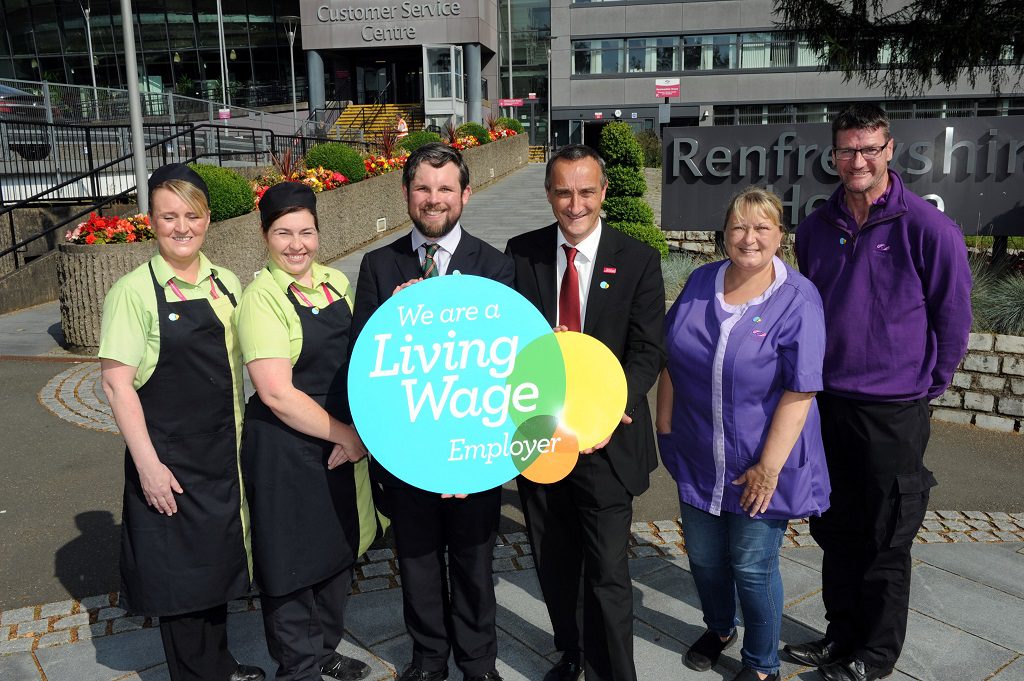 Renfrewshire Council is leading the way for fair pay after becoming one of only a handful of Scottish local authorities to be an accredited Living Wage employer.

The council already pays at least the Living Wage of £8.25 per hour to all its employees – but applied for accreditation to help set an example to other local organisations.

The Living Wage is set each year by the Living Wage Foundation and calculated according to the basic cost of living and what people need to make ends meet.

In order to be accredited, the council has had to work with its various suppliers and contractors to ensure they too are paid the Living Wage.

To mark Renfrewshire’s achievement, Councillor Mike Holmes, the council’s deputy leader, and David Faith of the Poverty Alliance’s Scottish Living Wage Accreditation Initiative were joined by some of the council’s catering and cleaning staff.

Councillor Holmes said: “This council is leading the way in Scotland in our work to help people out of poverty, with a number of innovative projects ongoing through our Tackling Poverty Fund.

“At the same time our Invest in Renfrewshire scheme has helped create 1,000 new jobs in the past four years and slashed our youth unemployment rate.

“But as proud as we are of that, employment isn’t on its own enough – too many people in Renfrewshire are in work yet still in poverty.

“We pay the Living Wage because we believe it isn’t just a good thing for our staff but also for us as an employer.

“And we want to help spread the word about those benefits to other employers in Renfrewshire to encourage them to follow suit.”

“At a time when two-thirds of children in poverty in Scotland are in a household where someone works, paying the Living Wage has never been more important.

“We are glad to see Renfrewshire leading the way and hope that other local authorities will follow in their footsteps in the coming weeks and months.”