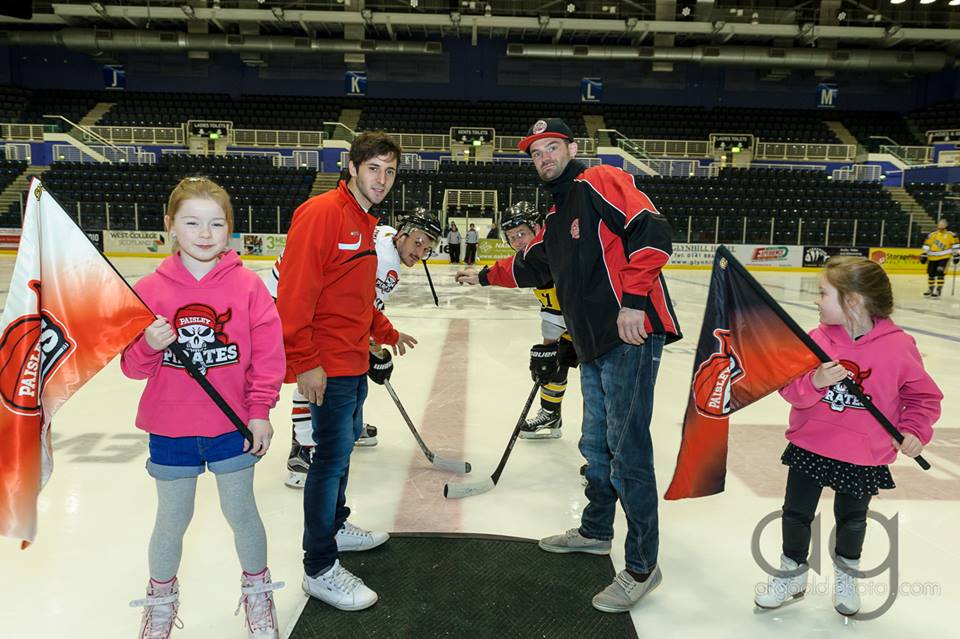 Paisley Pirates fans received a high speed bonus before their final regular season home match against the Dundee Tigers last Sunday, when two of the Glasgow Tigers’ latest signings, Englishman Danny Ayres, and Argentinian Coty Garcia, put in an appearance at Braehead Arena and performed a ceremonial dropping of the puck prior to the match going ahead. Coach Ian Turley explained, “The Tigers very kindly invited our players and officials over to Ashfield in September to take in a meeting, and we were delighted to reciprocate last weekend, with a large group of Tigers fans enjoyed a thriller in what was for many of them their first live ice hockey match. We were particularly grateful that Danny made it over, as he was feeling a bit second hand after a crash at Ashfield earlier in the day during a practice, but he was determined to come and see us, and it was great to see so many of our speedway cousins take in a match.”

“Our seasons overlap by only a few weeks at the start and end of our respective playing periods during a year, and both clubs hope that fans of one team will maybe take in the matches/meetings of the other during their respective close seasons. It makes sense to encourage fans to do so, when they’re maybe missing their usual dose of adrenalin, and both sports provide plenty of it! Tigers start at 3.00pm on Sundays, and we play at 6.00pm, so it’s perfectly feasible for supporters to enjoy a high speed double even when both clubs are in action.”

“We know the Tigers are commencing their season at Ashfield on 27 March with an Inter League Challenge against the Coventry Bees from the Elite League, and I’m sure that a number of our fans will be regular visitors to Ashfield over the summer months.”
The attached image, courtesy of Al Goold, features (from left to right):