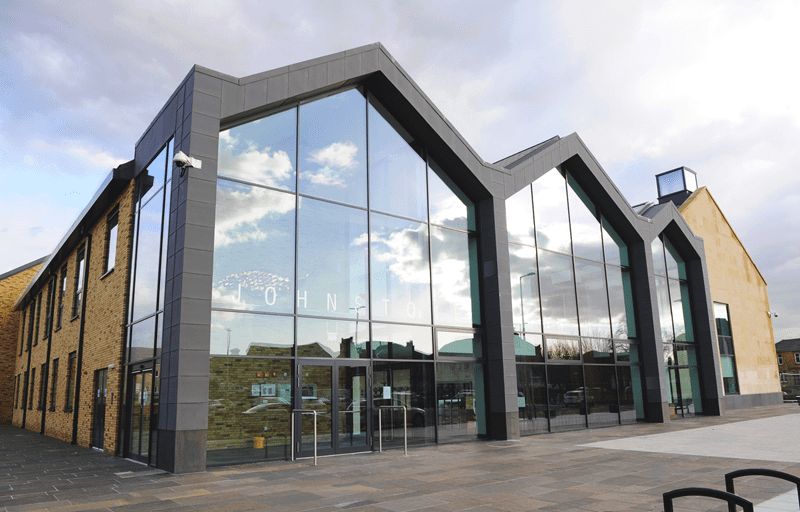 Johnstone’s £14.5m town hall has had international recognition at a prestigious architectural awards ceremony featuring projects from across the globe. The building – which was officially opened in May last year – was Commended at the Civic Trust Awards in London, which aim to showcase the very best in architecture, design, planning, landscape and public art.

Projects also honoured at the ceremony – the longest-standing built environment awards scheme in Europe – included buildings from the across the UK as well as USA, Canada, Spain, Italy and Belgium.

Johnstone Town Hall was one of only seven Scottish entries among the 58 which were honoured on the night.

The striking glass-fronted building has changed the face of Johnstone, and was taken forward as part of Renfrewshire Council’s commitment to the regeneration of the town.

It was designed around an internal ‘high street’ theme and is home to modern community facilities including a library, theatre/conference space, ceremony suite, coffee shop, meeting spaces and a dance studio.

The town hall also offers many council services under one roof, including a customer service centre, offices for housing and social work staff, and AdviceWorks. Police Scotland and Macmillan Cancer Support are also based in the building.

The building was designed to reflect Johnstone’s industrial heritage and contains specially-commissioned artwork. The design was informed by consultation with local resident groups.

The town hall was designed by Renfrewshire Council and Holmes Miller and built by BAM Construction for clients Hub West Scotland and the council.

Renfrewshire Council Leader Mark Macmillan said: “This ceremony is there to honour the very best architecture from across the UK and beyond – so it is pleasing to see one of ours sitting in such esteemed company.

“Over the past year it has won a string of awards but for a building we helped design to be recognised among international efforts is testament to the quality of the work.

“The new Johnstone Town Hall was years in the planning as we were determined to get it right and create a facility which could sit at the heart of life in the town for generations to come.

“We made a significant financial commitment to the project as we wanted it to help act as a catalyst for other development in the town.

“But ultimately the building was designed for the people of Johnstone to make their own and over the past year it has been great to see that happening.”

Johnstone Town Hall is available for hire for a wide range of events and activities including weddings, meetings and conferencing, social events and performances.

Further information can be found at www.renfrewshireleisure.com or by calling 0300 300 1210.

More information about the awards can be found at www.civictrustawards.org.uk