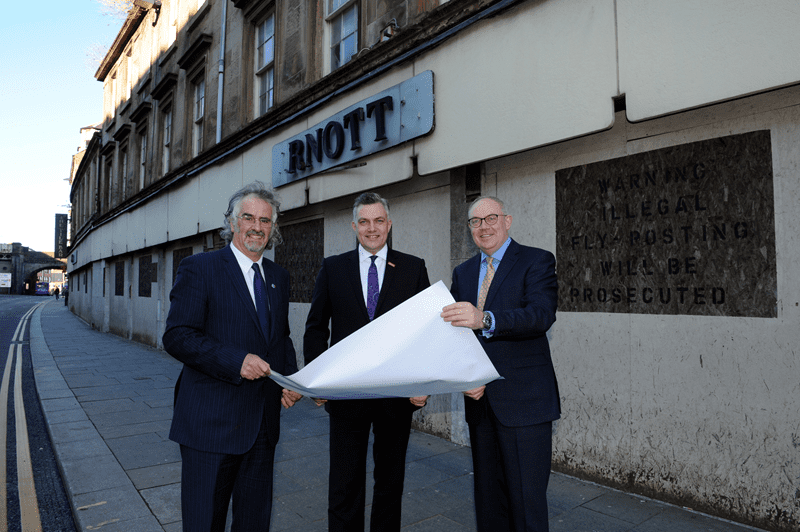 Paisley town centre’s ongoing regeneration has taken another exciting step forward with a deal lined up for more new flats on the site of the former Arnotts store. Link Group has announced plans for a proposed affordable housing development of 24 flats on Smithhills Street.

Subject to planning consents, the empty department store buildings sandwiched between the Methodist Central Hall and the Tile Bar would be demolished, with new flats potentially built in their place to open in 2018.

This is the latest step in a long-term masterplan to bring the Arnotts site – owned by a joint-venture company made up of Renfrewshire Council and Park Lane Developments – back into use.

Since 2014, that has seen Link build 31 new homes on Lawn Street and Gauze Street, while Park Lane has overseen 11 new luxury apartments in the listed frontage on Gauze Street, all of which are now sold out.

Work is ongoing on a new restaurant on the ground floor – called Pendulum – to be opened later this year by the Cardosi family, who run several other local eateries.

The deal to acquire the site will be voted on when the board of Link Group meets later this month.

Renfrewshire Council Leader Mark Macmillan said: “For a decade the former Arnotts store was the most prominent and high-profile gap site in the town centre, and an all-too-visible sign of Paisley’s retail decline.

“This planned development will see a third phase of that site brought back into use –cementing its position as a visible sign of the town’s centre’s gradual rebirth.

“Like many residents, I have fond memories of the old department store – but we all have to accept the retail world has fundamentally changed since then, and Paisley town centre needs to move forward not back.

“And there are visible signs of progress all about us, via council and private sector investment alike – more new flats on Mill Street, the Russell Institute being brought back into use, the Piazza investing more than £1m on car park improvements, and a new museum store to open on the High Street next year.

“With all of this happening as the town’s bid for UK City of Culture 2021 gathers pace, we can see exciting times lie ahead for Paisley town centre.”

Link Group chief executive Craig Sanderson added: “We are delighted to continue to be invited by Renfrewshire Council to contribute to the regeneration of Paisley town centre and to increase the supply of affordable new homes.

“This is the latest proposal in a series of projects demonstrating the effective working relationship Link has with the council.”