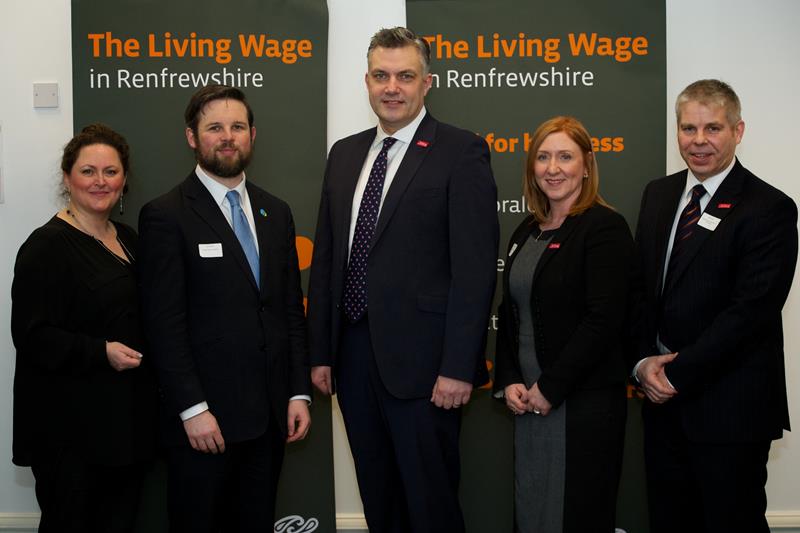 The drive for a fair and prosperous future for Renfrewshire is gathering momentum. Councillors are getting ready to vote on submitting an application for the council to become an accredited Living Wage Employer and record numbers of local businesses have attended a seminar on the benefits of accreditation. Councillor Mark Macmillan, Leader of Renfrewshire Council, said, “We want to build a prosperous, progressive future where people can thrive in employment and businesses can grow as a result of having a loyal and committed workforce. The Living Wage is part of that successful picture.”

The Living Wage is a voluntary hourly rate set independently, updated annually and calculated according to the basic cost of living in the UK. It affords people the opportunity to provide for themselves and their family. This year, it is set at £8.25 an hour.

However, there are around 16,000 jobs in Renfrewshire that pay below the Living Wage. So, for many people, work is not a guaranteed route to a sustainable standard of living. Renfrewshire’s independent Tackling Poverty Commission recommended that the number of jobs paying less than a Living Wage be halved to improve lives throughout the area.

The council is encouraging other Renfrewshire employers to join it in seeking accreditation and its campaign is gathering strength. More than 60 local businesses took part in a seminar on Wednesday and discussed how the Living Wage can benefit them, their employees and Renfrewshire’s communities.

David Faith from the Living Wage Campaign, who spoke at the seminar said, “I’m very impressed with the turnout from Renfrewshire’s business community. This is the largest event of this kind that I’ve seen. Some businesses have signed up to the accreditation process immediately and I look forward to working with others over the next few months. Of course, I’ll also be delighted to hear from any other organisations who want to join the campaign.”

Other speakers at the seminar included: Alison Dowling from the Renfrewshire Wide Credit Union and Bob Grant from the Chamber of Commerce, both of whom are already Accredited Living Wage Employers, and Fiona Hughes, the council’s Procurement Manager.

The council is Renfrewshire’s largest employer and Councillor Macmillan sees its accreditation as an important step towards creating a Living Wage economy. He said, “The council and business community share many aims: growth, success, a first class committed workforce and the wish to be associated with sound and progressive social values. The Living Wage will help to achieve these aims and to improve the lives of employees, their families and the wider community.”

Good sports splash the cash for hospices
Scroll to top