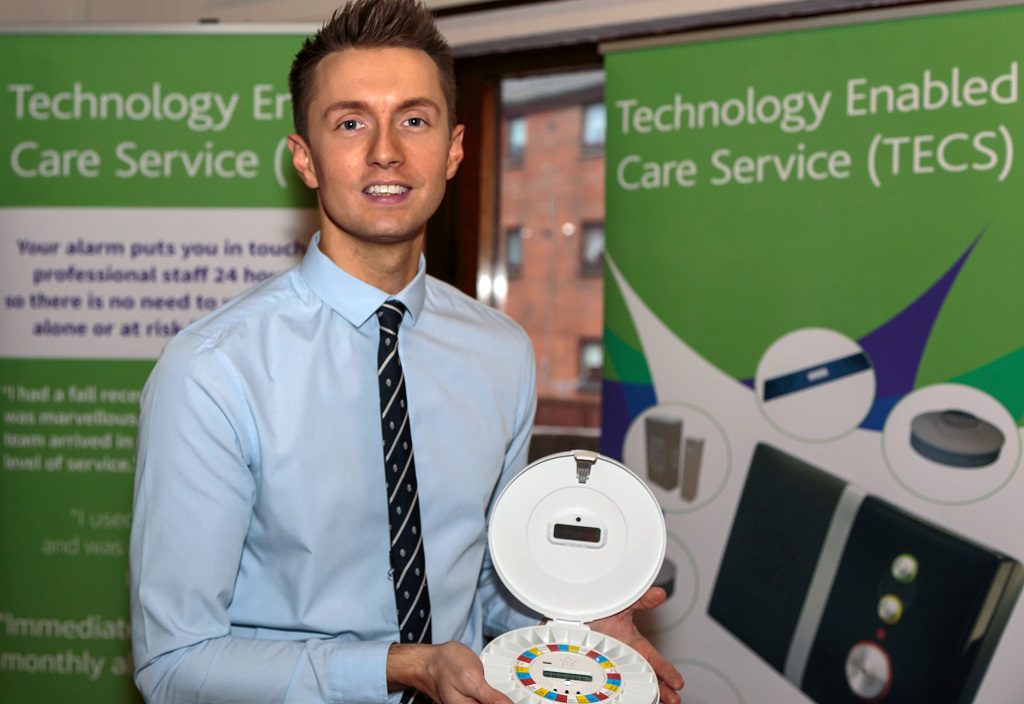 TELLY weather presenter Sean Batty created a buzz when he gave his support to a community alarm system that his grandmother had installed after a fall in her home. The housewives’ favourite was helping promote the TECS alarm system, which helps more than 3,600 people stay safe at home through the red button that links them to a 24-hour response service.

Sean was invited along to the West End Community Centre in Paisley – which is home to the charity ROAR Connections For Life – to promote the value of TECS, which stands for Technology Enabled Care Service.

He chatted to members of to ROAR, who promote preventative health and wellbeing services as well as community activities for the benefit of older people.

And he revealed how his grandmother Fay Batty is being helped by TECS, which utilises sensors around the home and the latest assistive technology to link people to a call centre without the person having to call for help.

Fay, who lives in the Lochfield area of Paisley, decided to have the community alarm system installed after she fell at home and lay on the floor for hours until help arrived.

Sean added: “She sings its praises. She says she doesn’t know what she would do without it, and that the people are lovely and very prompt when she’s required someone to help her.

“My gran also has a smoke detector linked to a device under her pillow, which would wake her up in the event that the alarm went off. The detector also sends an alert through the community alarm.

“It’s great to have these devices around the home now, which give older people – and their families – peace of mind and reassurance that someone is there when help is needed.

“I am only too happy to support initiatives that help older people live independent, healthy lives – especially in my home town.

“The TECS system that supports those with health issues to remain in their own homes is based on the principle of giving people choice and control over their lives, which is something I fully support.

“This service is bringing a little sunshine into people’s lives – so the forecast is looking good here!”

ROAR general manager Nicola Hanssen said: “It was very good of Sean to visit us and to engage so enthusiastically with our members.”