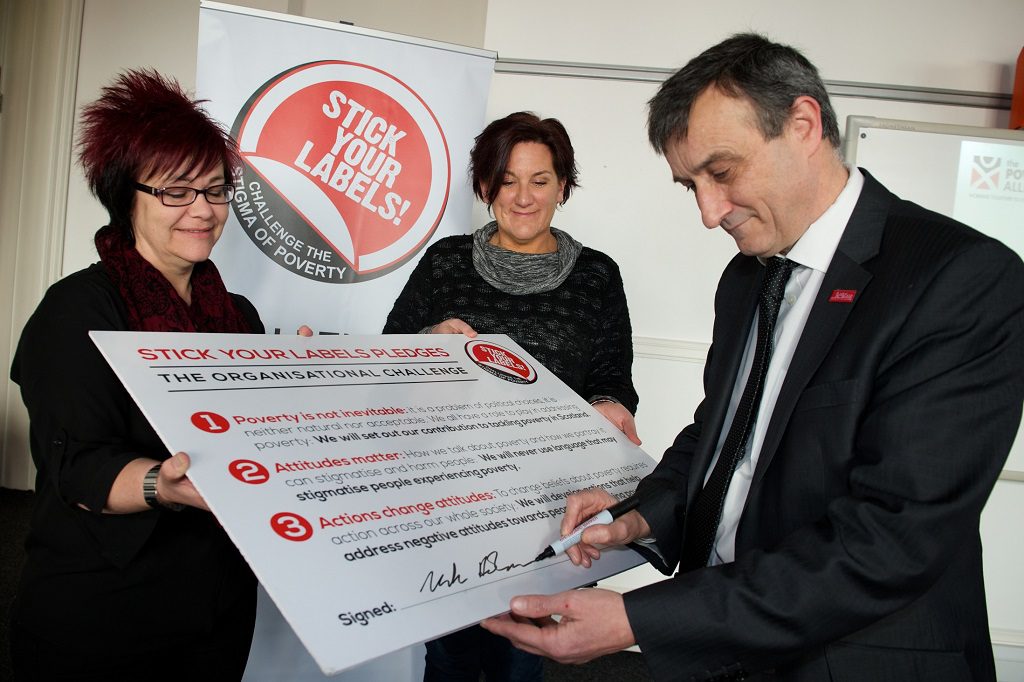 Renfrewshire Council has continued its journey to tackle poverty by signing up to a prominent national campaign that aims to end poverty stigma. The council, which initiated Scotland’s first poverty commission to look at child poverty at local level, has signed up to three key pledges as part of the Poverty Alliance ‘Stick Your Labels’ campaign. Councillor Mike Holmes, Depute Leader of Renfrewshire Council, said: “Unfortunately the stigma of poverty is a difficult reality faced by many people on a daily basis. We know there’s been a hardening of attitudes, particularly around welfare, and while this is a national issue there’s plenty we can do locally to change this.

“It’s crucial to bear in mind that the reality for families is very different to the unfair and stigmatising labels that exist, with people actually doing all they can to make ends meet in very difficult circumstances.

“The independent Renfrewshire Tackling Poverty Commission was clear in its findings that people who live in poverty not only feel stigmatised, but excluded too. I am proud Renfrewshire Council is signing up to the ‘Stick Your Labels’ campaign. This will be underpinned by a programme of work between our front line services and local third sector group the Star Project, to make sure our staff understand how the stigma of poverty can affect people – and know that they’re absolutely a part of ending stigma.”

The three ‘Stick Your Labels’ pledges are:

1) Poverty is not inevitable: It is a problem of political choices; it is neither natural nor acceptable. We all have a role to play in addressing poverty. We will set out our contribution to tackling poverty in Scotland.

2) Attitudes matter: How we talk about poverty and how we portray it can stigmatise and harm people; we will never use language that may stigmatise people experiencing poverty.

Peter Kelly, Director of the Poverty Alliance said: “We are delighted to have Renfrewshire Council join the growing list of organisations in Scotland committed to tackling the stigma of poverty.

“Much of the language that is now used to refer to those claiming social security is intended to stigmatise, and we know the damage that this can have on both the individual and society.

“Public bodies like local authorities can play an important role in shifting attitudes towards people living on low incomes. They are in a position to challenge the myths that exist about poverty, and to change the experience of those who use their services.

“We hope that other local authorities will follow in the footsteps of Renfrewshire in the coming weeks and months”.