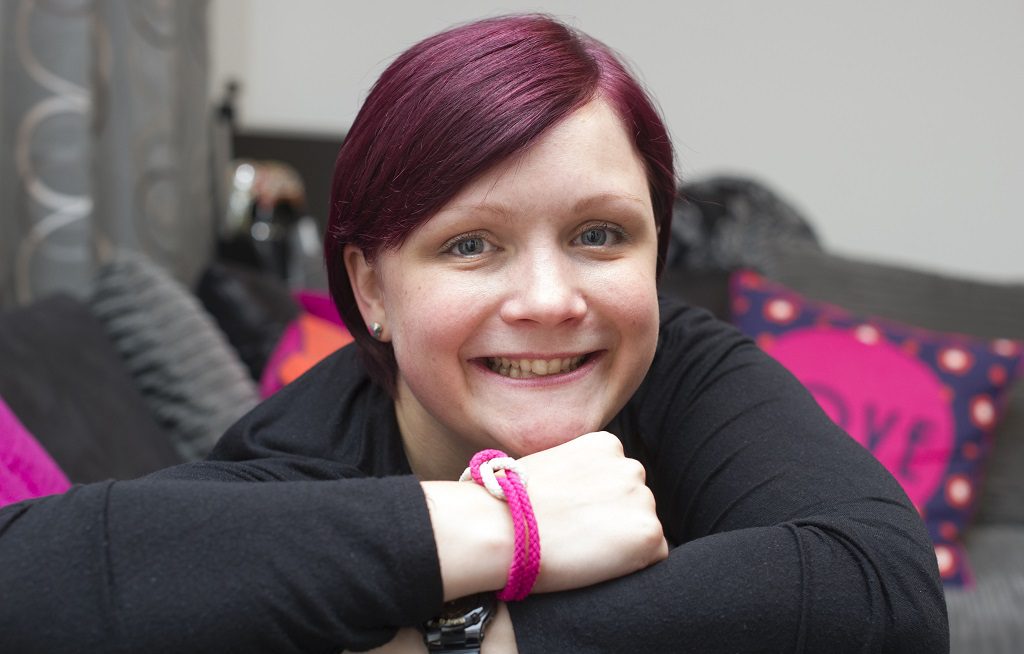 CANCER death rates in Scotland have fallen by 9 per cent* in the last 10 years according to the latest analysis released on World Cancer Day by Cancer Research UK today.(Thursday). Picture by Lesley Martin
Cancer Research UK is encouraging Scots to wear a unity band or make a donation to demonstrate their support for people affected by cancer.  Theunity band is made of two parts, knotted together, to represent strength in unity. They are available for a suggested donation of £2 from all Cancer Research UK shops and at www.cruk.org/worldcancerday Inspirational breast cancer survivor Claire –Ann McCallum was chosen to kick off World Cancer Day in Scotland. Claire of Edinburgh who was just 34 when diagnosed marked her recovery from the disease by jetting off to New Zealand where she completed her first skydive. The dare devil moment from 15,000 ft over stunning Lake Taupo was captured on a video which Claire-Ann  treasures. Claire-Ann, now 36, said: “My heart felt like it was beating out of my chest before I jumped.

“We went up in what seemed like the smallest plane ever. It was a tandem jump so I was really scared as I was strapped to the instructor. I felt like freaking out then I said to him, do you know what, I got through cancer last year so I can do this. I screamed the whole way down but by the end of it you had to pull my head out of the clouds as I was as high as a kite.

“Cancer has made me a stronger person. Staying positive got me through some dark days and right from the start I was determined to kick cancer where it hurt. Not every day was a good day but there have been more highs than lows. Thanks to some amazing doctors, support from friends and family who were there for me every step of the way and research then I’m healthy, loving life and still here to give something back and help other people.”

IT expert Claire who took part in a clinical trial during cancer treatment signed up for the skydive as part of an activity packed, seven week trip of a lifetime last October to destinations including Bangkok, Vietnam Australia, New Zealand and Fiji. Claire also dived with sharks and rode on buffalo during the holiday.  It was an unforgettable way to recharge her batteries after the toughest fight of her life. She recalls vividly the moment on June 17 2014 when doctors at the Western General hospital in Scotland’s capital first told her she had cancer. Claire had visited her doctor after discovering a small, pea sized lump on her left breast but it was a shock when tests confirmed it was a sign of cancer.

Claire said: “I didn’t cry but instead asked the doctor how they were going to get rid of the tumour.

“One of the hardest things was telling the people I loved about cancer. I was young and regularly ran 10ks and half marathons. There was no way I was going to let cancer get the better of me. I had surgery to have the lump removed around the time of the Commonwealth Games in Glasgow and I remember afterwards lying in hospital watching on television the opening ceremony with John Barrowman dancing along beside giant Tunnocks tea cakes and wondering if what I was seeing was really happening or whether the painkillers I was taking were actually too strong.”

Claire who has no children went through one cycle of IVF where five eggs were frozen before starting chemotherapy. She lost her hair during treatment but instead started wearing a wig which she named Wendy. A total of 19 radiotherapy sessions followed which Claire completed just before Christmas 2014. She  took part in a clinical trial called Persephone, going on the drug Herceptin for 12 months to help prevent cancer returning.

Claire will also take tamoxifen for 10 years. And she threw herself in to helping organise a Relay for Life event for Cancer Research UK, raising vital funds to help beat cancer sooner. It was also an emotional moment for Claire when after returning to her job at Standard Life she won a most inspirational employee award.

Every hour, around three people in Scotland hear the news that they have cancer** and the number of people being diagnosed with the disease has now reached around 30,200 cases every year. *** In 2003, 358 in every 100,000 people in Scotland died from the disease. But thanks to research improving outcomes for patients, this fell overall by around 9 per cent to 327 people per 100,000 in 2013. ****

Research is the key factor in reducing the number of lives lost to cancer, with improved knowledge about preventing the disease, surgical techniques, precisely targeted radiotherapy and more effective drugs all boosting the outcome for patients. Death rates show that the proportion of people who are dying of cancer has fallen dramatically even though more people are being diagnosed with the disease. The rising number of diagnoses is largely due to the nation’s  ageing population and cancer being more common in older people.

But it’s not all good news. For some cancers, such as liver and pancreatic, the rates of people dying from the disease have increased over the last decade. *****

Lisa Adams, Cancer Research UK spokeswoman for Scotland, said: “Today, on World Cancer Day,  it’s important to remember that even though the death rates are falling, the overall number of people dying from cancer is expected to increase.

“This is because the population is growing and more of us are living longer. Too many people are still being diagnosed with and dying from cancer, not just here in Scotland, but across the UK and around the globe. World Cancer Day provides an opportunity for people  to ‘band together’ for this one special day and show that united we can beat cancer sooner.
Thanks to research more people are surviving cancer than ever – but there is still a great deal of work to be done to ensure that more families can stay together for longer.

“Wearing a unity band is a simple way to show your support and be part of the generation that transforms the lives of the millions of people affected by cancer. Together we can all do something to reduce the impact of this devastating disease.”

To create a bigger impact on World Cancer Day this year, Cancer Research UK has joined forces with leading cancer charities – Breast Cancer Care, Anthony Nolan and the Movember Foundation – to unite the nation and help transform the lives of millions of people affected by the disease. The four charities collectively support millions of people every year through their individual work in the prevention, detection, treatment and support of those affected by cancer.

The bands are available from each charity in their own colours and all money raised from the unity bands will go towards the charities’ individual research projects and support services.