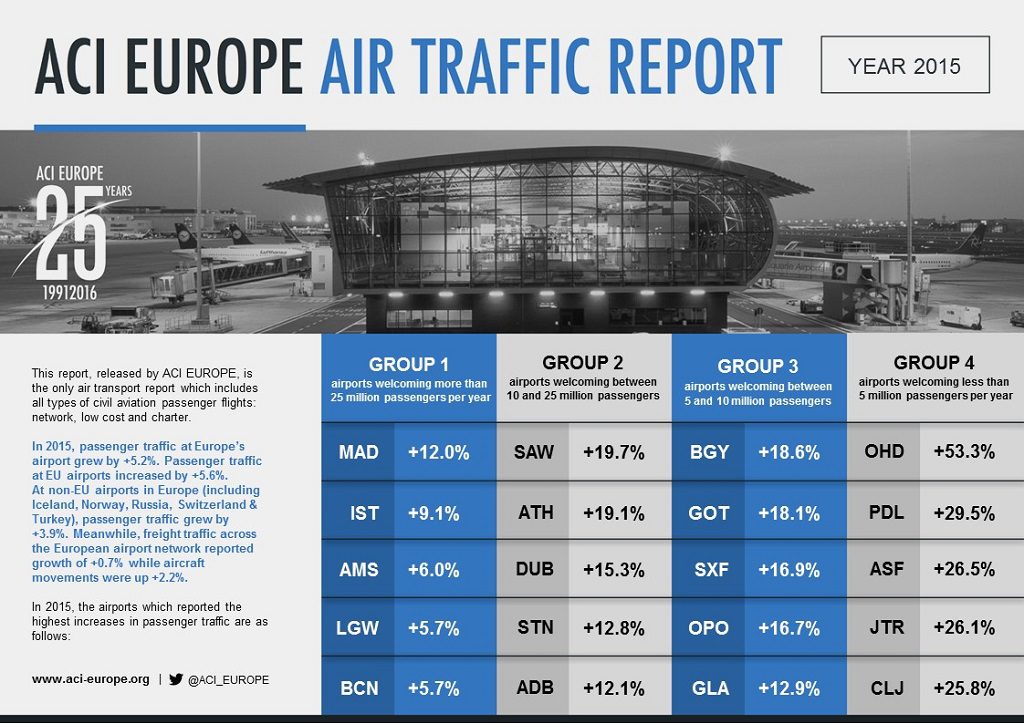 Glasgow Airport has been confirmed as one of Europe’s fastest growing airports during 2015 according to European airport trade body ACI EUROPE which has released its traffic report for the full year. ACI EUROPE categorises airports based on passenger numbers with Glasgow Airport falling into group three – airports welcoming between 5 and 10 million passengers. Glasgow was the fifth fastest growing airport in its group behind Milan, Gothenburg, Berlin and Porto. During 2015, the airport announced 30 new routes and services, significantly strengthened its connections to major European cities and cemented its position as Scotland’s principal long haul airport.

Amanda McMillan, managing director of Glasgow Airport, said: “To have been confirmed as one of the top performing airports in Europe is a fantastic achievement. We worked extremely hard throughout 2015 to strengthen our route network and this was reflected in our passenger growth. We recorded double digit percentage growth during each month of 2015, bar one, and we are looking forward to building on this success during what is our golden anniversary year.”

Commenting on the wider aviation trends in Europe Olivier Jankovec, Director General ACI EUROPE, said: “2015 has been a very good year in terms of passenger traffic, with European airports welcoming an estimated 1.95 billion passengers. 20% of them achieved a double-digit increase, including Glasgow, and many broke new traffic records – mostly fuelled by the continued growth of low cost airlines and selected non-EU airlines.

“EU airports generally performed extremely well, despite Germany and France being impacted by airline & ATC strikes and the Paris terror attacks. Remarkably, Istanbul-Atatürk airport became the 3rd busiest European airport with 61,8 million passengers, after London-Heathrow (74.9 million) and Paris-Charles de Gaulle (65.7 million). It should be noted however that small regional airports (non-capital city airports with less than 5 million passengers per annum) across the continent underperformed the European average, with their passenger volume only increasing by +3.8%. This is indicative of traffic growth becoming more concentrated and less inclusive.”

The airports which reported the highest increases in passenger traffic in group three during 2015 (compared to 2014) are as follows: